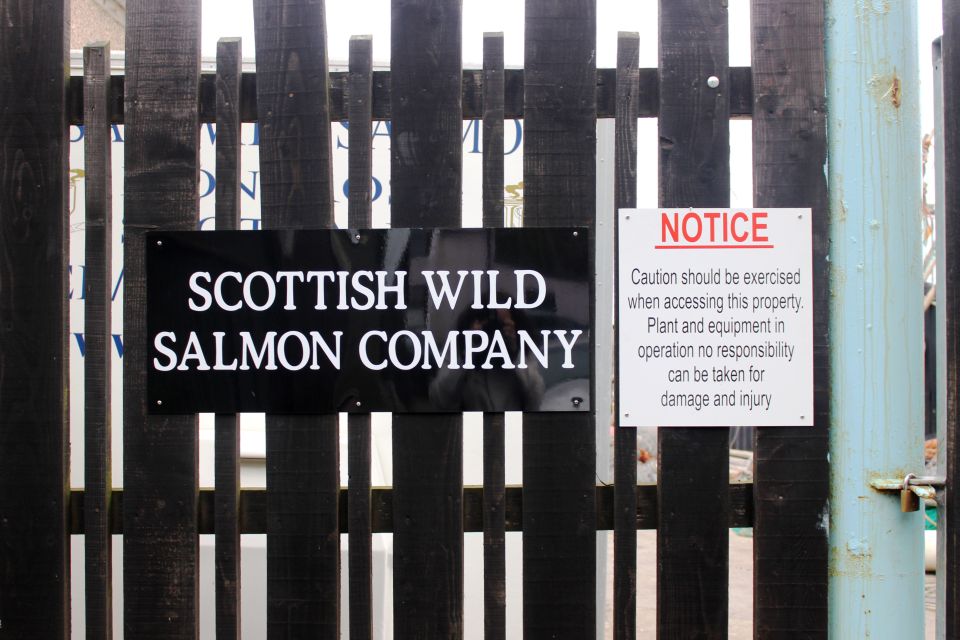 When Scottish Wild Salmon Company (SWSC), a subsidiary of Montrose-based USAN Salmon Fisheries Ltd arrived in Gardenstown, the landowner made it clear there was no permission to shoot seals from his property.  At least one such illegal seal shooting took place last year, yet no one was charged.

Tourists who had witnessed the episode last year abruptly cancelled bookings and left; some locals were concerned; some angered.

This year the SWSC pledged not to use lethal methods to deter seals from going near its salmon nets near the Ythan Estuary. The SWSC arrived in Gardenstown and Crovie this year to net large numbers of salmon (we have asked for figures but no answer has been received yet). They arrived with guns.

Sea Shepherd arrived to monitor the situation this year. Here’s what’s happened since.

The owner of the area of land in front of the building and yard SWSC operates from has forbidden shooting. Sea Shepherd’s internet posting reads:-

“We have debated long and hard over whether to release this video showing Scottish Wild Salmon Company staff behaving in a threatening and abusive manner to one of our volunteers. Our final decision was made for us when these very same employees arrived at our beach clean last Friday to intimidate our staff, even making sexually explicit comments to one of our female volunteers.

“We hope that the residents of Gardenstown and Crovie will continue to come forward to tell the Scottish Wild Salmon Company that they are bringing disgrace to this otherwise beautiful part of Scotland not only with their seal slaughter but also with their behaviour in public.”

It is proven that Sea Shepherd were threatened by people intent on shooting seals who had rifles; why there is no prosecution forthcoming is unclear. 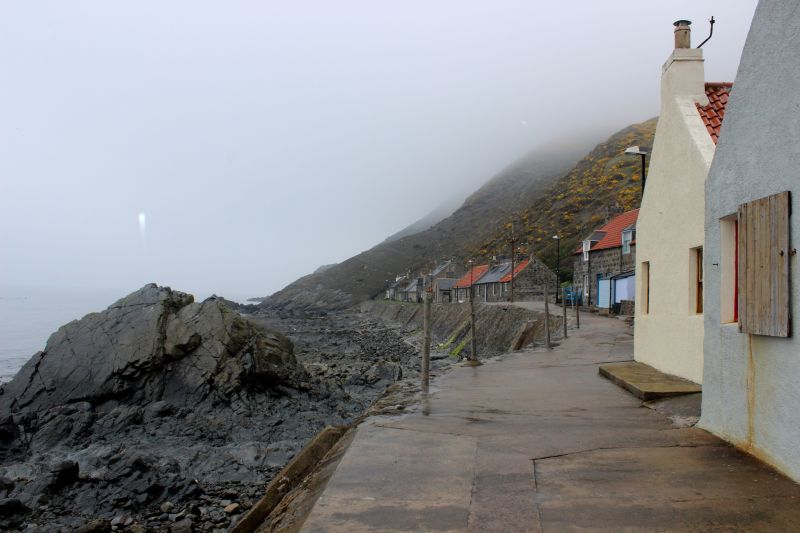 It has also been proven that there is no permission to shoot seals granted by the landowner:  no one can shoot seals in Gardenstown and Crovie lands.

What men are doing walking around the area with shotguns then is something of a worry and certainly reason for the law enforcement agencies to step in. (Aberdeen Voice readers may well want to compare and contrast the way in which men with rifles are walking around these coastal towns, having been proven to engage in threatening behaviour, and the ‘Siege of Heathryfold’).

Aberdeen Voice has been told that the SWSC’s operatives are living in a non-residential building. While that is not a huge violation of law, it is still illegal. However, the more serious accusation has been made to Aberdeen Voice that guns are being stored in the SWSC’s building.

Aberdeen Voice will share this allegation with SWSC and the police, and will report back with any responses.

If the rifles are not being stored in the building in question, then where are they being legally stored? Did the police investigate how the guns are being stored when they investigated the video of Sea Shepherd’s man being threatened by people who had rifles?

A Walk on the Wild Salmon Side

Aberdeen Voice visited Gardenstown and Crovie, and spoke to locals and Sea Shepherd. No SWSC employees were visible, and their premises locked; it was a weekend. SWSC has given their position in an earlier email, the contents of which appear in the comments section of a previous article, and will be welcome to explain some of the issues arising from this article.

Despite proponents saying that shooting seals is essential and no concern to the people of the north east, many locals are very much opposed to the idea of shooting seals. As one explained:

“A presentation was made to the local heritage society [about studies done involving St Andrew’s University about sonic deterrents to seals]; there are ways to stop salmon being eaten by seals. There are sonic devices which keep the seals away, and there are ways to construct salmon nets so that seals can’t get in. Shooting should not be happening.”

“I put the blame for this on Marine Scotland.  I tried to get answers from them and find out how and why they issued any permits to kill seals.  I telephoned – but I never got the promised answer back. With salmon farming taking place (which has lots of room for improvement in how the salmon are treated), there should not be any large scale netting of wild salmon. The smaller anglers are against what’s happening as well.”

And another local added: 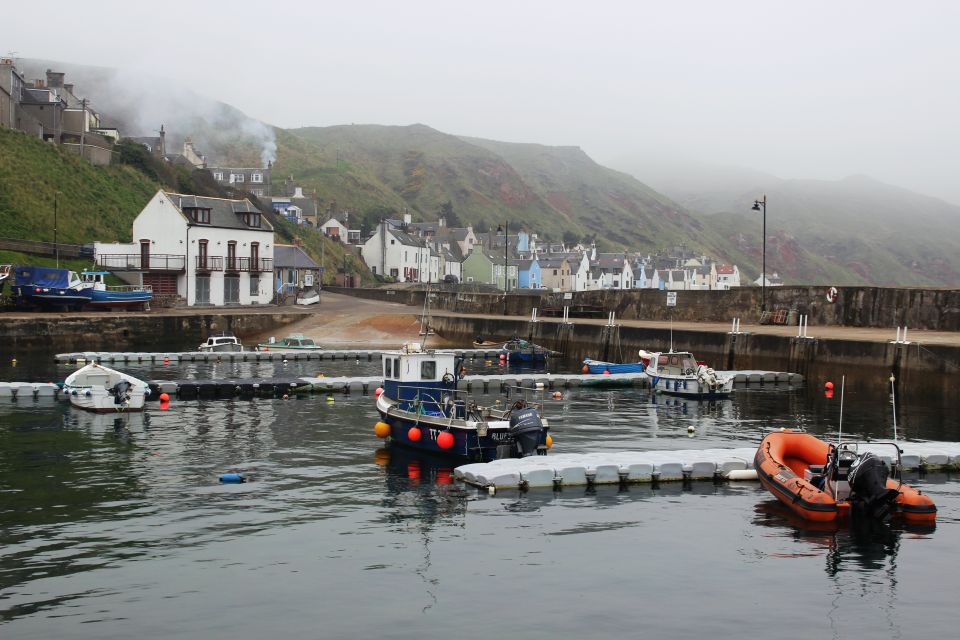 “I have been documenting seal shooting since the seal was shot from Crovie pier last year. I will keep doing so, and I am opposed to SWSC shooting seals. I think there are two net areas (to the east) of Crovie.”

“…there are studies done on the material found in seal waste; I believe the study showed that salmon is not a large part of the seal’s diet.”  [seals eat a wide variety of sea life; salmon is far from their only food].

During our visit, Aberdeen Voice did not find a single local resident who wants gunman shooting seals in the area.

Some would spread the belief that the salmon industries, wild and farmed, must be allowed to do as they please for the benefit of the rural communities.  The government says otherwise; wildlife tourism is big business. A Scottish Government  2010 report, ‘The True Value of Wildlife Tourism’ advises:

“… wildlife tourism annually brings in a net economic impact of £65 million to Scotland’s economy and creates the equivalent of 2,760 full time jobs.

“The report also found that 1.12 million trips were made every year to or within Scotland with the main aim of viewing wildlife. This form of tourism appealed greatly to UK-based visitors and Scots themselves, accounting for 56 per cent of trips. And it was these UK visitors who generated 75 per cent of the income.”
http://www.scotland.gov.uk/News/Releases/2010/06/16110712

The UK  has common and grey seals; the common seal population is declining. We know that illegal shooting takes place (in areas other than Crovie). Aside from the danger of being shot, seals are suffering from pollution from the oil industry, marine activity and plastic waste in the water; depleted fish stocks further threaten seals, sea birds and other marine life.

Arguably we should be protecting the seal population, cleaning our water, and perhaps even taking less Atlantic salmon. An Irish-based research paper reports a drop of 75% in Atlantic Salmon populations:

The Gardenstown and Crovie communities do not operate solely on the basis of salmon fishing; tourism, leisure pursuits and arts play a part. These activities have demonstrably been hit by the arrival of seal shooters with rifles, witness the tourists who left after they saw the shooting last year.

Sea Shepherd will continue to monitor the activities of SWSC, as will concerned locals.

John Robins of Save Our Seals Fund said:

“Sea Shepherd and the Hunt Saboteurs Association have done a great job in bringing this issue back to public attention. I have no doubt they saved many seals from being shot at Gamrie Bay. We now need the general public to help save seals from being shot all around Scotland by signing our Petition calling on the Scottish Parliament to stop issuing licenses to shoot seals.”

Aberdeen Voice will likewise report on any further developments.