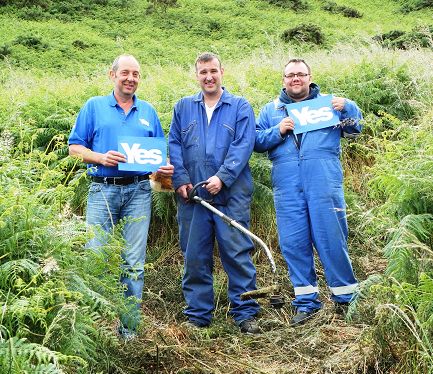 Gardenstown garden strimmers have carved a giant ‘Yes’ into Mhor brae. With thanks to Paul Robertson.

Anyone visiting the coastal village of Gardenstown will be hard-pressed to miss a new addition to the landscape – the word ‘Yes’ carved into the Mhor brae.

The foursome have committed to maintaining Gardenstown’s new landmark with regular outings with their strimmers.

“It’s a bit of fun but it’s also a a very bold and deliberate statement.  We have people who’ve heard about it coming here to Gardenstown to see the big Yes and para-gliders from all over the country are flocking here to get aerial shots.

“It’s helped put Gardenstown on the map and we hope that people who come to see our handiwork will follow up by putting their cross next to Yes on September 18.”