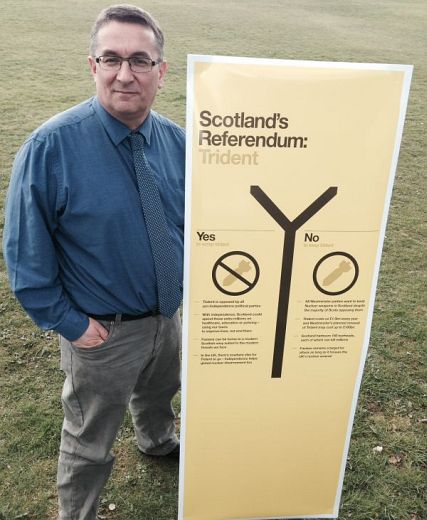 Following Tuesday’s release of the Trident Commission’s report, North East MSP Christian Allard has asked whether the three Westminster parties can be trusted to push for global nuclear disarmament when they all remain committed to the costly renewal of Trident.

The report supports the UK government’s commitment to renew the Trident nuclear weapons system while at the same time promoting nuclear disarmament across the world.

Mr Allard said the report failed to acknowledge that the world has moved on from the days of the Cold War.

He said that supporting the renewal of the outdated Trident weapons system was irresponsible and counterproductive in the campaign against nuclear weapons.

The French-born MSP pointed out that while the Scottish Government is committed to getting rid of Trident nuclear weapons, the Westminster parties remain devoted to renewing the weapons system, a position at odds with a commitment to nuclear disarmament.

“It is disappointing the Trident Commission has concluded that renewal of Trident is compatible with a position of pursuing global nuclear disarmament.

“Trident was a Cold War era deterrent that is no longer practical or effective in this day and age. Its renewal will also come at enormous cost to the people of Scotland.

“I would ask: can you trust the three Westminster parties to work for a nuclear-free world if they are so determined to renew their current stock of nuclear weapons?

“It is an untenable position that does not make any sense. Only by voting Yes in September can the people of Scotland make sure that Trident is removed. We can set a positive example of nuclear disarmament for the rest of the world and inspire other nations to follow suit.”

“The Trident Commission report has failed to see the logic that if your potential opponents see you are building a new era of Nuclear Weapons, so will they.

“You cannot say that you are against nuclear weapons while at the same time building new ones, this is totally hypocritical.

“If the same energy was put into getting rid of Nuclear Weapons rather than building and maintaining them, we could get rid of these ghastly weapons which threaten mankind.

“For those of you who want to get rid of nuclear weapons but are undecided about how to vote at the Independence Referendum, having read this report I would say that the only way is to vote Yes.  It is not going to happen otherwise.”

One Response to “A Question Of Trust On Nuclear Disarmament”