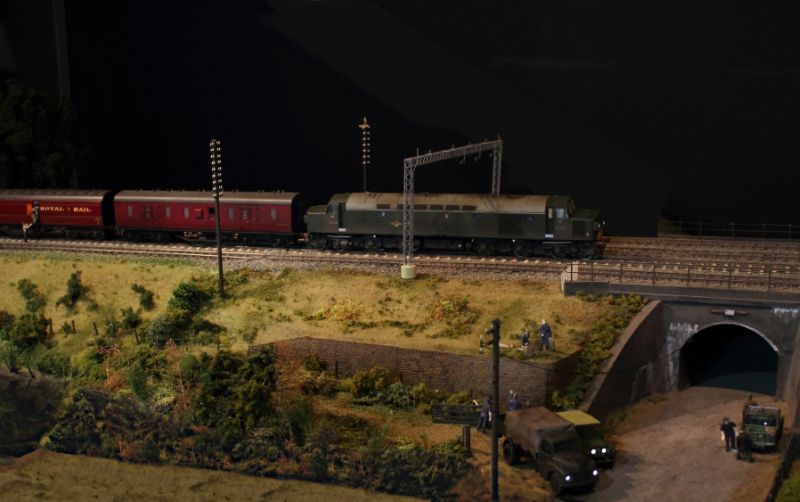 Scale model of the scene at the Bridego Railway Bridge, Ledburn

A new arrival to the collection at the Grampian Transport Museum has completed the line up of a topical new exhibition on the events of the Great Train Robbery.
Still billed as the ‘crime of the century’ the events which took place in the early hours of 8th Aug 1963 were only ever photographed in the hours after, when the authorities arrived to begin their investigation.

The Son et Lumiere model, which is now on show at the museum, is an absolutely accurate scale model of the scene at the Bridego Railway Bridge, Ledburn.

Recently built to commemorate the 50th anniversary of the infamous raid, it is on loan from the Luton Model Railway Club until the end of August and helps to bring together the first serious exhibition of its kind on the subject.

Having already reunited two of the actual vehicles used in the raid, Curator Mike Ward is delighted to have secured the Diorama.

“It’s great to have this show-stopping model as part of our Great Train Robbery exhibition. This has been painstakingly built, from scratch, working from the Police photographs which were taken in the hours after the raid – the only visual record of the scene of the crime which was captured.

“There was a lot of mis-information reported following the incident and the Luton Model Railway Club have done a fantastic job of peeling back the layers to get to the truth and recreate the scene of the crime. We’re very grateful to the Luton Club for allowing us to borrow the model until August. It really does put the finishing touches to our exhibition!”

Along with the Diorama, Grampian Transport Museum was also to locate and secure on loan the actual Austin Loadstar truck which was used to flee the scene of the crime with the loot. An ex army Land Rover Series 1 was also tracked down and is also on display until the end of August.