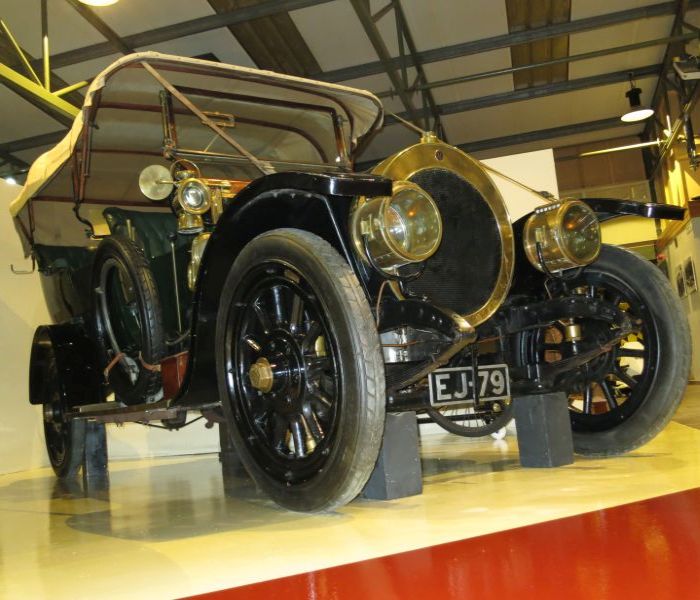 The Maudslay which is with us for the 2014 season. There are believed to be just 6 of these left.

Although the museum has been closed since October a dedicated team has been hard at work, refreshing and updating the exhibition over the winter months.

A topical new exhibition, based on a temporary exhibition produced by the British Postal Museum and Archive to mark the 50th anniversary of ‘The Great Train Robbery’ describes the daring raid on a mail train in August 1963, that has also been described as the Crime of the Century.

The exhibition includes two of the three vehicles actually used on the night of the robbery, an Austin Loadstar lorry and an ex-Army Land Rover and also material loaned by New Scotland Yard and private collectors.

New attractions include a stunning state of the art HGV simulator which uses high definition graphics and a full motion platform to accurately simulate and teach the driving of a large articulated lorry.

For the first time ever the Museum has been able to secure for display an example of an extremely rare ‘round radiator’ Maudslay motor car dating from 1910. Maudslay were popular in Aberdeenshire and Aberdeen City possibly due to the influence among the car owning wealthy elite of the time of Sir Charles Forbes of Strathdon who was the Chairman of the company.

Alongside the new displays a few old favourites return, including Billy Connolly’s motortrike and the Pop Icons collection – with a display including Daleks and two examples of the first AND last of the original Minis.

QR codes will once again accompany many of this year’s displays, allowing visitors to access video and archive material from the collections of the Museum and British Pathe using their smart phone.

2014 also sees the return of the Junior Driving School, a fun and educational introduction to road safety and driving for visitors aged 5 to 11 years, which proved extremely popular in its first year. The diary is already filling up with bookings for birthday parties.

Following visitor feedback ‘The Traveller’s Rest’ tearoom will also be open to Museum visitors every day throughout the season, providing a range of hot and cold beverages, soups, sandwiches and a fine selection of snacks.

The Museum opens to the public at 10am on Sunday 30th March, with a special preview evening being held on Thursday 27th March from 6pm (invited guests and members from 7.30pm).

Frequent visitors to the Museum can take advantage of the popular gtm+ membership scheme, which offers unlimited free access to the museum and events, along with a range of exclusive member’s benefits. Membership starts from just £30 for an Adult membership.