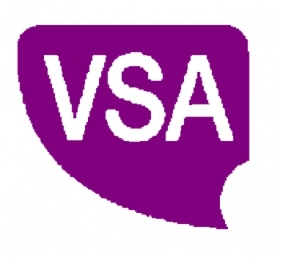 With thanks to Sophie Davidson.

These groups have been given a charity to work with and a mentor from the chosen organisation supports the students on their quest to raise as much money as possible.

Three students from the course, Kathleen Macleod, Sophie Davidson and Nicola Duncan, who are working with VSA to support the young carers’ project, came up with the ‘Step Up For Care’ event which involves people from any age group who want to stay fit and healthy while raising money for a local cause.

“We were delighted to be paired with VSA as they provide some amazing and caring local services.  We specifically chose to support young carers, as we were incredibly touched when hearing about what they go through on a day to day basis.

“Our fundraiser, ‘Step Up For Care’ has an interesting competitive element to it.  One month before the final event, teams of five, or ten, will be given pedometers and challenged to walk as many miles as possible whilst raising sponsorship money.

“We’re excited to be part of this new and exciting fundraiser for VSA.

‘We hope that people in the area will feel the same as we did and want to take the challenge to help the young carers.

A lavish dinner ceremony, at which the teams are invited to enjoy a three-course meal, entertainment, raffles and an auction, will be held at the Norwood Hall hotel on the 18th of April next year.  The students will also host a small awards ceremony for all those who took part.

The VSA Young Carers Project provides young carers with help with homework and allows them to socialise with children in a similar situation to themselves.  It also operates the Chill Out Zone at the Castlegate where young carers can come and enjoy some time by themselves to do homework, watch TV, read, or chat with friends.

All monies raised through sponsorship for the teams and through the raffles and auction at the Norwood Hall event in April, will go towards improving the young carers’ time at the Chill Out Zone, or to funding the groups with a trip away that would not otherwise have been available to them.

For further information about VSA and its work in the local community, visit www.vsa.org.uk