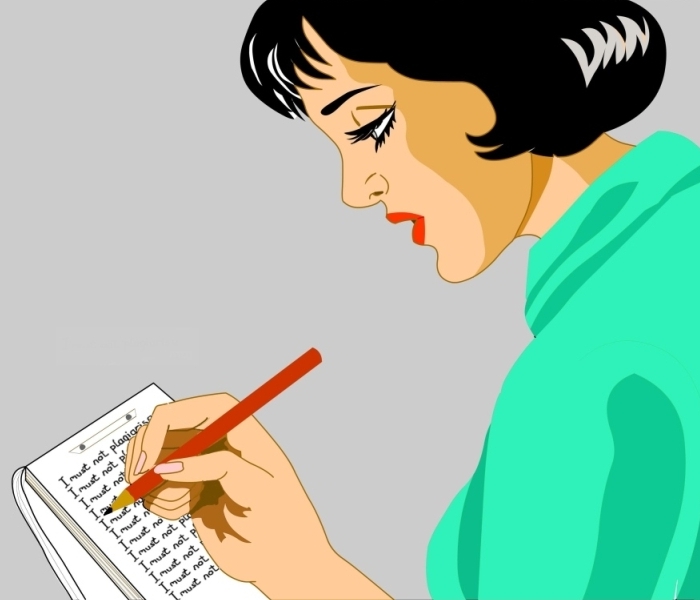 Stuart Heritage wrote a column on winter in the Guardian, which is paraphrased above; by mentioning his name here and acknowledging the fact, there is no harm done. In paraphrasing Heritage, disgraced ex-Press & Journal columnist Carly Fallon is also in a sense paraphrased, for she had appropriated Heritage’s words and passed them off as her own.

Sadly, the meaning and seriousness of plagiarism seems to have been totally lost on Fallon.

In her (?) work, which oddly is no longer available online, she shamelessly hijacks Heritage’s piece, dumbs it down, and changes a few adjectives.

There is no thanks to Heritage, no ‘by your leave’ and no reference. No quotation marks are used around his phrases to show they are not hers. This is plagiarism, or put another way, one writer stealing another writer’s work and passing the theft off as being original.

Carly Fallon, married to New Zealand footballer Rory Fallon was given a column to write for the Press & Journal. This would undoubtedly have been no mere cynical exercise to fill space and hopefully increase circulation by capitalising on an attractive looking woman married to a sports star playing in Scotland’s Premier League.

Surely after advertising for a columnist/diarist, and sifting through hundreds of writing samples from aspiring and seasoned writers, the best woman for the job won. No doubt the P&J will be happy to explain the merits on which they handed out this column, and share with its readership how much Carly was paid.

Scott Bryan of Buzzfeed analysed the Heritage and Fallon columns, and found paragraph after paragraph of Fallon’s later piece was identical or nearly so. The Buzzfeed piece can be found here:  http://www.buzzfeed.com/scottybryan/local-paper-columnist-plagarises-column-from-the-guardian

Damian Bates’ apology can be found in this STV piece (no word yet from Fallon) http://news.stv.tv/north/247770-carly-fallon-was-axed-by-the-press-and-journal-over-plagiarism/.

In it Bates is quoted as saying:-

“Obviously plagiarism – in any form – is totally unacceptable.  I take this matter very seriously indeed and have decided that we will no longer be accepting columns from freelance writer Carly Fallon.

“I’m deeply disappointed this situation has arisen and apologise for any upset this has caused anyone.”

Damian Bates is on the Editors’ Code of Practice Committee of the Press Complaints Commission, and was promoted to lead all of the Aberdeen papers owned by Aberdeen Journals Ltd last year.

Perhaps it is a bit galling for Fallon to have been dismissed from the paper by a man whose paper arguably promotes his wife’s business interests? Mrs Bates, aka Sarah Malone, works for Donald Trump at the Menie Estate, where two Sites of Special Scientific Interest were given over for a golf course and housing, and where the residents face intrusive security, and a host of hardships.

The paper often runs pieces favourable to Trump (who stands accused of racketeering in the US at present over his Trump ‘University’ programme). In fact Bates declared he would not run anything from pressure group Tripping Up Trump – claiming among other things they were not ‘local’ enough for their members’ opinions to be considered.

The P&J has all but ignored Anthony Baxter and Richard Phinney’s documentary ‘You’ve Been Trumped’ which won awards world-wide. In it the many issues of Trump’s activities at the Menie Estate are examined by experts; it includes dramatic footage of the documentary makers being arrested while filming – a new first for the area, and arguably a low for journalism.

All of which adds up to some very interesting values and standards at work within Aberdeen Journals Ltd.

Surely though, with anti-plagiarism software in existence, and with others making the connection between Fallon and purloined paragraphs, someone at the P&J involved in reading, proofreading and editing her columns might have had a sense of déjà vu?

Fallon on a Bruise

Alas for Carly, the cat is out of the bag, the jig is up, and the fact is copy that went out under her name in the P&J was appropriated from writers elsewhere in the UK without any acknowledgement, thanks or compensation. The word is that Fleet Street’s finest lawyers are rubbing their hands and sharpening their pencils in anticipation of compensation claims on behalf of the wronged writers and their publishers.

The Bastion of journalistic ethics, The Aberdeen Press & Journal (Editor Damian Bates) has disposed of Mrs Fallon’s services after her plagiarism was proved beyond any reasonable doubt. Not only had this hack hijacked Heritage’s work, she’d also borrowed heavily (to say the least) from other writers including Guardian’s Lucy Mangan, Rhiannon Lucy Cosslett, Toby Young (The Spectator) and Jan Moir (Daily Mail).

Toby Young wrote ‘How to Lose Friends and Alienate People;’ there is some evidence that Mrs Fallon, if not copying this text, is at any rate applying its philosophy. Stuart Heritage’s Twitter account notes he’s had an apology from the editor of the P&J, but no word yet from Carly.

What were the complex subjects analysed by these writers  that were so difficult to grasp that stealing the material was the only solution to covering the issues examined? Whether Winter has more gravity than the other seasons, the joys of wearing a warm bathrobe instead of a silk kimono, and how is it that summer can fade to the winter months, and Halloween.

What should have been easy, simplistic musings from football WAG Fallon on common subjects became this unfortunate serial columnar kleptomania. Our average sixth formers could have come up with something original to say on these themes, but sadly, not Carly. Or did Carly indeed write these columns in the first place?

If she had used a ghost writer, or had a ghost writer foisted upon her by a publication eager to seize on her football-related popularity, then she wouldn’t have been the first a, b or z list sleb to be ghosted. At present neither Mrs Fallon nor the Press & Journal have commented on this possible angle.

Writing is – or should be – a highly individualised activity; the writer invests their time, research and skills into producing something that they want to be associated with. Stealing an author’s work is about as low as a fellow author can sink.

Then again, as long as there are tabloids like the P&J that dole out columnist jobs to celebrities first, then worry about writing calibre and credentials, and the small matter of having something to say later, we’ll keep valuing writing as an activity anyone can do, and one that is only of interest if the person doing the writing is famous, or bedding the famous.

There will inevitably be further fallout from the Fallon story; all that remains to be said is ‘Oh what a tangled web we weave when first we practice to deceive’ – Sir Walter Scott (lest there be any doubt).

3 Responses to “How The Mighty Has Fallon”