This is only the second time I’ve ever watched a DJ gig, and the first time I’ve critiqued one. This time at least DJ Format turned up punctually unlike my recollection of a late DJ Yoda many moons ago. Andrew Watson reviews this late-night Tunnels show from 27 October. 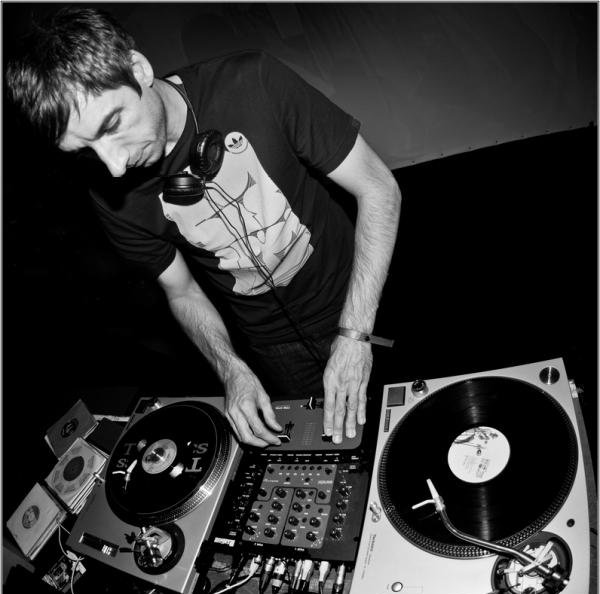 Warming up was a local DJ, Mike emblazoned on the back of his shirt. There were, as predominates in hip-hop, James Brown samples galore, and even some Gil Scott Heron. The seguing of songs was almost seamless, and the eclectic mix of tribal/world music tested and pleased the ear.

At first I was rather confused, as there were two guys behind Mike, the stage partially belonging to two randoms and a performer.

It wasn’t until about an hour into the set that it became apparent that DJ Format was waiting in the wings for the support slot to end.

He urged those sitting beyond the stairs leading down to the dance floor to come forward.

Personally, I was rewarded for my compliance with a spin of a somewhat modulated version of Eazy-er Said Than Dunn by Eazy-E.  More often, though, it was a case of turning to my friend to ask whose song the Southampton DJ was playing.

Though not necessarily a bad thing, sometimes his ear for nearly-inaccessible, ear-to-the-underground samples alienated me. On the other hand, lack of familiarity with the material played wasn’t a pre-requisite to enjoying the show.

Things picked up, however, when he blasted a piano-driven instrumental of Sam and Dave’s Hold On, I’m Comin’. The pricking of interest amongst those on the dance floor was palpable.

DJ Format, real name Matt Ford, was a canny man demonstrated by his chopping and changing of samples to run with whatever music he was playing alongside. For example, I recognised a guitar lick belonging to another song that I had in mind. He eventually played that song after permuting it for other purposes.

My only criticism would be that when he did eventually play Wrath of Kane by Big Daddy Kane he cut it too soon, leaving out the best verse, but one of the strengths of music is its occasional unpredictability, going in direction other than anticipated.

Arguably, one of the strongest draws were his connections to Los Angeles collective Jurassic 5. He was their bus driver, before later finding acclaim and opening for DJ Shadow.

Work done with the former was showcased, shifting emphasis and giving him ample room to display his renowned scratching technique.

Performance-wise, the only blip of the night was a skipping record. He launched it into the crowd and my friend got him to autograph it at the end of the show.

This was an exhausting gig, given the 2300 Sunday start time, and it was a tad pricey at £10. There was some break-dancing to entertain those in the crowd keener to keep their feet together and just watch.