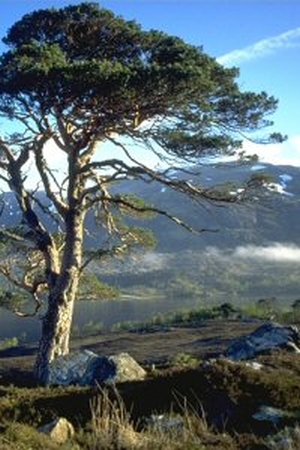 As Scotland’s Minister for the Environment and Climate Change, Paul Wheelhouse, formally launches a consultation on whether Scotland should have a National Tree, the conservation charity Trees for Life has welcomed growing calls for the Scottish Government and Parliament to adopt the Scots pine.

The consultation on Scotland’s National Tree, requested by the Scottish Government, has been launched by Forestry Commission Scotland in Edinburgh.

“The growing campaign for the Scots pine to be proclaimed Scotland’s National Tree is inspiring. The Scots pine is one of the world’s most beautiful trees, a powerful symbol of Scotland and a keystone species of the Caledonian Forest, which in turn is one of the country’s greatest national treasures.

“Declaring this remarkable and important species as our national tree in 2013, the year of Natural Scotland, would send a much-needed signal of support for Scotland’s beleaguered forests, and would boost the development of a uniquely Scottish national identity. The Scots pine’s natural range in the UK distinguishes Scotland from the rest of the country.”

Over 70 countries around the world, from Canada to Denmark to South Africa, have National Trees that provide important symbols for their national identities.

The Scots pine (Pinus sylvestris) is the largest and longest-lived tree in the CaledonianForest, and forms a ‘backbone’ in the forest ecosystem on which many other species depend.

The tree provides a home for special wildlife, including red squirrels, capercaillie, crossbills and crested tits. It offers ideal nesting sites for ospreys, shelter for deer and pine martens, and shade for twinflower, one-flowered wintergreen and blaeberries. The richly textured bark of a pine is a fantastic habitat for lichens, mosses and insects.

With increasing concerns about climate change, deforestation and biodiversity loss, the need for concerted action to conserve and regenerate Scotland’s native woodlands is more important than ever before.

Today, only a fraction of the former CaledonianForest survives, with its native pinewoods reduced to 35 isolated remnants. However, Trees for Life is restoring the forest to a wilderness region of 1,000 square miles in the Highlands to the west of Loch Ness and Inverness.

The bid to address Scotland’s current lack of an official tree was begun by campaigner and Trees for Life supporter Alex Hamilton. MSPs began the process of potentially designating the Scots pine as one of Scotland’s official national symbols on the 8th January this year, when the Public Petitions Committee heard Mr Hamilton’s request that the Scottish Parliament urge the Scottish Government to proclaim the Scots pine as the National Tree of Scotland.

Scots pine, the only tree named after Scotland, is the most widely distributed conifer in the world, with a natural range that stretches from beyond the Arctic Circle in Scandinavia to southern Spain and from western Scotland to the Okhotsk Sea in eastern Siberia. Despite this wide distribution, the Scots pine forests in Scotland are unique and distinct from those elsewhere because of the absence of any other native conifers.

In good situations in mainland Europe, the Scots pine can grow to 120 feet in height. In most of the pinewood remnants in Scotland today, the largest trees are about 65 feet tall, with exceptional trees recorded up to 90 feet high. Maximum girth at breast height is usually up to 8 feet, although some trees up to 12 feet in girth have been recorded.

Scots pine usually lives to an age of 250-300 years in Scotland, although a tree in one of the western pinewood remnants was discovered to be over 520 years old.

2 Responses to “Scots Pine As National Tree For Scotland?”