BrewDog’s annual general meeting on Saturday 22 June in the AECC came on the heels of a new share offering, impressive financials, and yet more awards; Aberdeen Voice contributor and card-carrying BrewDog shareholder Suzanne Kelly and Voice photographer Julie Thompson were on the spot. 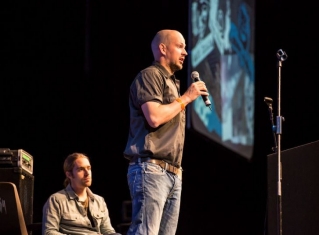 A very sombre AGM was held in north Aberdeen fairly recently. The men at the helm of the business in question visibly squirmed as they addressed a small number of unmoved shareholders about their 2012 failures and shattered plans. In a speech peppered with jargon, the board spoke of ‘customer-facing businesses’ and so on, knowing they had turned in yet another poor year’s performance.

Following the gloomy AGM, the press called the business ‘down in the dumps.’  The controversial management continues to ignore calls for its resignation, despite a catalogue of failures, and investors have little to look forward to in the foreseeable future.

No, I attended my second BrewDog AGM at the AECC, which was more like a party with a few hours devoted to business matters, and very successful business matters at that.  What a swell party (well, AGM) it was:

There is nothing like a BrewDog AGM, yet six years ago, you would have found BrewDog’s founders James Watt and Martin Dickie flogging small quantities of their beer at the Aberdeen Farmer’s market on Belmont Street.  Times have changed.

Hundreds of fellow shareholders from across the world (Belgium, France, Germany, Singapore) converged on the AECC to celebrate all things BrewDog.  Representing all ages, sexes shapes and sizes, BrewDog shareholders and their guests settled down to the serious business of drinking beer, talking beer, thinking beer and of course tasting beer. 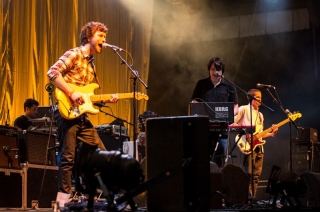 The attendees also enjoyed great bands, great food, a wide range of discounted merchandise and beer, and they found time to address a little bit of financial business, too.

BrewDog’s AGM mirrors the company in many ways.  Both are growing bigger and better every year.  Both put a high premium on engaging with the public, and do so with a huge degree of success which professional PR moguls only wish they could bottle and sell.

In terms of bottling and selling, BrewDog is now Britain’s fastest-growing food and drink brand.  Not bad.  The company are serious about beer and the business of beer, and here are some facts and figures which show how that seriousness is made manifest:-

BrewDog has achieved an average annual growth of 167 per cent over the past five years and the company is valued at over three times the value it was given during the last Equity for Punks scheme in 2011.

The company made 42,000 shares available to anyone to buy at £95 each, ignoring traditional methods of funding to support its continued rapid growth. The brewery plans to use the funds raised to further expand its new brewery, its burgeoning bar division and a new series of bottle shops across the UK. 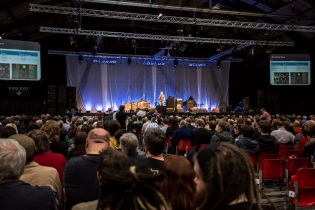 There is much to look forward to; the team have been taping a programme in America.  They’ve won yet more awards for business performance; they plan more expansion and a visitors’ shop.

Seeing as how they sold £1 million worth of shares of the new offering in 24 hours, another bumper year is
expected.

Can world domination be far off?

Looking at how this company started, how it deals with its staff, investors and the beer-drinking public, I wouldn’t be surprised.  This is the space to watch.

I’m not telling anyone to invest in anything; I’m just proud to be part of a local success story that’s employing people and reintroducing the world to chemical-free, innovative, tasty beer.  And why not?