A new freedom of information request reveal Police Scotland incurred costs of £8,000 when Donald Trump cancelled a visit to the Menie Estate.  Aberdeen Voice’s Suzanne Kelly is seeking clarification of information police supplied, which she feels is self-contradictory. 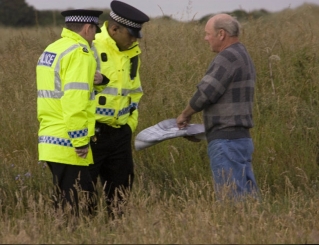 Arrivals of Donald Trump and/or his family to Aberdeen Airports seem to be media events,  meriting photos and articles in local newspapers.

Police are often shown in pictures of Trump arriving, travelling or staying at his estate.
The police also intervened in a land boundary dispute at the Forbes Farm, normally a civil matter.

Is Trump getting policing above and beyond what any other visitor would get?  If so, what is the cost of this police protection?

On the one hand, the police have this to say about how they treat Trump, his family, and staff:-

“No extra police protection is provided to Mr Trump, his family or staff etc beyond that which would normally be afforded to any other member of the public.”
– letter from Mrs Jody McKenzie, Compliance Manager, Information Management Unit, Grampian Police to Suzanne Kelly, 2 July 13.

However, the same letter which makes this claim continues to say:-

“On one occasion, when Mr Trump had to cancel a planned trip to the area at short notice, an exercise was carried out to estimate what the cost to the force was. An estimate of the officer and staff time was £5200.”

This figure was later revised upwards:-

“Having checked the details, I note that I provided you with only the estimated cost to Aberdeen division, which was £5200, but the total cost including Aberdeenshire officers was £8192.  I apologise for this oversight.”
– email from Mrs Jody McKenzie  to Suzanne Kelly of 11 July 13.
I believe these two claims to be contradictory, and have asked the police to explain how someone who receives no additional police cover or protection could at the same time cost the police – ie the taxpayer £8,200 when they cancel a visit.

“Although costs were calculated in regard to the cancelled trip, this was done at the time of the cancellation and involved a member of staff speaking to individual officers to find out what their shift changes were and what overtime or re-rostered rest days they were entitled to, in order to come up with an estimated figure.

“We also had to ask those involved in planning how long they spent on these tasks – such detail would not be routinely recorded and was provided based on the officer/member of staff’s recollection.  Clearly this was easily done due to the fact that task was recent.  If we were to approach officers and staff now to recall how long they spent on a piece of work 2 or three years ago, it is unlikely they would accurately recall.

I have asked for the police to conduct an internal investigation into how my request was handled.  I believe payroll records and other captured data could easily be matched to Trump visit dates (or to cancelled Trump visit dates) and the information requested could then be supplied.

Updates will be made to this story when further information is available.