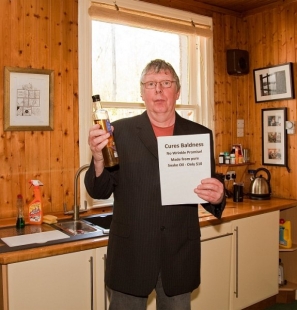 In 2011, for example, they dealt with 31,458 complaints and investigated each of these to see if they seemed to breach the rules. As a result, over 4,590 adverts were changed or withdrawn.

Whether you are the boss of FCUK branded clothing or even Prince Charles the rules are there to be adhered to in the name of protecting the public from misleading advertising claims.

In essence the ASA’s role is to monitor and regulate the content of advertisements, sales promotions and direct marketing in the UK by investigating complaints and deciding whether such advertising complies with the UK advertising standards codes.

“The Advertising Standards Authority is the UK’s independent regulator of advertising across all media. We apply the Advertising Codes, which are written by the Committees of Advertising Practice. Our work includes acting on complaints and proactively checking the media to take action against misleading, harmful or offensive advertisements.”

Set up in 1962 and funded by a levy on the advertising industry the ASA is the first port of call if you find an advert misleading or offensive.  Anyone can refer a complaint and the online complaints form on the ASA website is very simple to complete.

The ASA has a range of sanctions at its disposal as Trump International Golf Club Scotland Ltd found out when they were ordered to “not to make claims unless they could be substantiated with robust evidence and not to use misleading imagery”, after 21 complaints were received regarding an advert featuring a US wind farm plus a reference to “the release of terrorist al-Megrahi “for humane reasons” – after he ruthlessly killed 270 people on Pan-Am 103 over Lockerbie”.

Publicity in the form of numerous press articles appeared regarding this adjudication and although some marketing theorists may claim that even bad publicity is good publicity, it might well be said that the Trump advert raised concerns in Scotland about the interference of a foreign national in Scottish renewable energy policy making.

The ASA can also refer problematic broadcast advertisers to Ofcom

Apart from the negative publicity generated by the weekly ASA adjudication lists, the Authority can order advertisers not to advertise unless the CAP Copy Advice team has seen the advertisement first and allowed the advertisement to go ahead.

For example, the ASA told French Connection UK Ltd, which makes the FCUK branded clothing, to have all its advertisements pre-vetted by the CAP Copy Advice team.

The ASA can also refer problematic broadcast advertisers to Ofcom and if the ASA has trouble with a repeat offender, it can refer the matter to the OFT under the Control of Misleading Advertisements Regulations 1988.

Mind you, both Trump and Auction World.tv are in good company alongside a wide variety of advertisers who have been deemed by the ASA to have misled the public.  This weeks ASA adjudication list includes upheld decision’s  regarding an ad for ”Dead Sea Kit”, a product that purported to remove wrinkles and featured text which claimed to unlock the secrets of anti-aging.

Cash Lady was similarly chastised for advertising pay day loans at a representative APR 2670% in misleading and socially irresponsible manner. The ad included the voice-over claim: “You could see your bank and fill in loads of forms, but there is an easier way to get a loan; check out www.cashlady.co.uk, with cash lady it’s simple to apply for up to £300. It’s dead fast too”.

In 2009 the ASA banned an Israeli tourism advert following over 400 complaints by the Palestine Solidarity Campaign and members of the public after a map in the advert showed the West Bank, Gaza Strip and the Golan Heights as part of Israel.

The adverts read “There is probably no God”

In the same year Nestlé’s claim that it markets infant formula “ethically and responsibly” was found to be unsupported in the face of evidence provided by the campaigning group Baby Milk Action.

Perhaps one of the oddest complaints to come under scrutiny was the Atheist Bus Campaign in which Atheist groups aimed to place “peaceful and upbeat messages about atheism” on the side of London buses in response to “evangelical Christian advertising”.

The adverts read “There is probably no God” which prompted complaints from folk who no doubt thought that there probably is a god. Some of the complainants claimed that the advert was “offensive and derogatory to people of faith, who faced the prospect of having to decide if God existed in order to rule on the complaint.”

In a master stroke of diplomacy the ASA ruled that the advert:

“was an expression of the advertiser’s opinion and that the claims in it were not capable of objective substantiation.

“Although the ASA acknowledges that the content of the ad would be at odds with the beliefs of many, it concluded that it was unlikely to mislead or to cause serious or widespread offence.”

Diplomacy however was not in order when in march 2009, Prince Charles came under heavy fire when his Duchy Herbals Detox Tincture became subject to complaints and ridicule.

The claims to be able to detox the body and aid digestion when one or two drops are added to a glass of water were challenged and the product, which contains dandelion and artichoke, was variously described as “implausible, unproven and dangerous” by Professor Edzard Ernst of Exeter University and “outright quackery” by some others.

After investigation the complaint was upheld and the prince’s company Duchy Originals was told in no uncertain terms not to make misleading claims which it could not substantiate. The press were less kind and headlines such as “Make-believe and outright quackery – expert’s verdict on prince’s detox potion” appeared in the Guardian.

Next time you see an advert for an instant baldness cure or a land grab by some foreign state, you might like to take the time to consider filling in the online complaints form on the Advertising Standards website. After all, its you the public who are being misled.