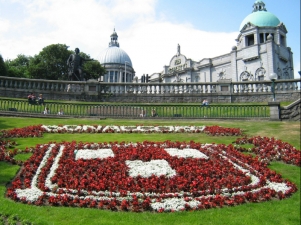 Aberdeen’s Granite Web is history; it will not go ahead, and the city will not be borrowing £90 million towards its construction.

Alex Salmond’s personal interest in the project was well publicised when it emerged his office had intervened in the TiF (Tax incremental Funding) bid appraisal for pilot projects in Scotland.

The appraisals were undertaken by the Scottish Futures Trust, which had placed the Aberdeen proposal 10th in the list of projects to be recommended based on a variety of financial and technical criteria.

Salmond’s intervention, at the expense of projects from Renfrewshire, West Lothian, Ayrshire and Dumbartonshire, propelled the web into position to be one of the potential pilots.

Correspondence between First Minister Alex Salmond, Sir Ian Wood and ACSEF has been released to Aberdeen Voice today under a Freedom of Information request. These letters shed further light on Salmond’s relationship with Sir Ian, who had promised £50 million of his own money towards the controversial £140m+ project.

Far from allowing local governments sovereignty over their own affairs, Salmond has shown, by intervening in the appraisal process, that central government can and will over-ride expert advice. He and Nicola Sturgeon have since said any TiF application for Aberdeen must involve Union Terrace Gardens – another intervention without precedent.

Although TiF is a pilot here, as a fundraising method it is already losing fans in its country of origin, the USA, where it is proving unsuccessful in several states. How central government can insist that a brand new, untested means of borrowing money cannot be used by Aberdeen unless it sacrifices its common good land park for a project runs contrary to cries of ‘freedom’ and ‘independence’ used by the SNP to encourage a vote for independence.

But what of Salmond’s correspondence on the subject of the web?

From the letters received, it is clear ACSEF and Sir Ian had been lobbying Salmond and his government to support the web – clearly with success. A letter of August 2011 indicates that Nicola Surgeon had been in contact with Sir Ian about the project. Here are some extracts:

“Thank you for your letter of 28 July updating me on progress with the Aberdeen City Garden Project. Nicola Sturgeon welcomed the opportunity to discuss these issues with you when she visited Aberdeen at the beginning of August…

“In relation to the TIF funding application, we are in the process of identifying further projects which can be included in the TIF pilot scheme. I understand that Aberdeen City Council will submit an outline proposal to the Scottish Futures Trust this month in accordance with the process that has been agreed. We look forward to considering this further.”
See – https://aberdeenvoice.com/2012/11/salmond-to-wood-aug-2011/

It is clear Salmond has admiration for Wood; could this have coloured his judgement when he saw fit to intervene in the recommended TiF projects?

[note: this contribution had not included paying NI on Wood Group staff for a number of years; the payroll was moved offshore]

“Your involvement in Scottish Enterprise Grampian and your successful previous chairmanship of the Scottish Enterprise Board have set the bar for others to follow… I have enjoyed meeting with you over recent years and very much appreciated the enthusiasm and dedication which you have brought to the Wood Group, the industry and more widely to Scotland…”
See – https://aberdeenvoice.com/2012/11/salmond-to-wood-19-07-12/

[note – initially Scottish Enterprise were supporting Peacock Visual Arts’ own plans for premises in Union Terrace Gardens. It is not precisely clear at the time of writing how the Peacock bid lost SE’s support, which quite quickly turned to Sir Ian’s favoured City Garden Project instead].

Sir Ian returned the 19 July letter in part as follows:

“I have been particularly grateful for the support your Government have provided to the Aberdeen City Centre Regeneration Project which, as you know, I believe is vitally important for Aberdeen’s long-term economic future and wellbeing.

“The vote of Aberdeen City Council on 22nd August will be crucial, and if this is positive I will obviously allocate some of my time to support the development phase of this project in any way I can, and I know there will be an important role for Scottish Government to play in facilitating this. If the vote is negative, Wood Family Trust will have no choice but to withdraw their offer of funding.”
See  – https://aberdeenvoice.com/2012/11/wood-to-salmond-01-08-12/

The first part of the paragraph above begs the question: why did the government support the City Gardens Project at the expense of others on the table, several of which were given higher ratings by the Scottish Futures Trust? Concerning the potential withdrawal of the £50 million offer, there is some ambiguity.

A statement from Sir Ian indicated this money would be deployed to charitable work in Africa, a most laudable act, indeed. The nature of this charitable work may or may not be the same as a project described on the Wood Family Trust website, in which they seek to improve the business acumen of tea plantation operatives in Rwanda, a country only just recovering from civil war, an aids epidemic, widespread hunger and poverty.

A further letter shows evidence of yet more lobbying; this time by a private trust, signed jointly by Tom Smith (ACSEF and the Trust) and Ian Wood:

“The current plan is that by mid-December the city council will be in a position to approve the TiF business case prior to it being submitted to the Scottish Futures Trust. It goes without saying that the Project will not proceed without TiF funding.

“We’d be very happy to discuss this with you further… We will also be seeking some further discussion with John Swinney…”
See – https://aberdeenvoice.com/2012/11/wood-smith-acgt-acsef-to-salmond-28-07-11/

The striking feature of this letter is that it indicates the city council is not in the driving seat. The council is expected not to debate or vote; it is expected to ‘endorse’ and ‘approve.’

The Aberdeen City Gardens Trust (ACGT) is a private entity set up to run the City Gardens Project that listed Tom Smith (also of ACSEF, and formerly Aberdeen & Grampian Chamber of  Commerce) and Colin Crosby (A&GCoC) as its two directors. It is therefore of further interest to note that in this letter of 28 July 2011, ACGT lobbies Salmond with praise for the scheme and seeks further meetings with both Salmond and Sturgeon.

ACSEF is paid for by the city and by extension the public, and the public were very much split on whether or not this project and its associated, high-level financing were acceptable. Precisely how ethical it was for a publicly funded body like ACSEF to forward a scheme favoured by its private sector members and also to expect the city to endorse its recommendations is unclear.

Sir Ian Wood, signatory on the ACGT letter, apparently had no official connection to ACGT (Companies House lists three directors of this trust). There seems to have been no tendering process for the ACGT to be handed a management role over the garden project uncontested and unelected.

Remembering that the land in question is common good land, not to be changed in usage per its ancient grant, the thin edge of the web towards privatisation is a worrying precedent.

The contents of these letters raise serious questions about the continued future of ACSEF, and the genesis and advancement of the Aberdeen City Gardens Trust as the proposed management body/special purpose vehicle for the scheme. Aberdeen City Council should reappraise ACSEF’s future, and at least ensure that ACSEF is not dictating policy going forward.

The most concerning issue emerging from these letters, however, is how the First Minister and his cabinet members were lobbied successfully and elevated a scheme from an Aberdeen billionaire above more fiscally credible schemes from other parts of Scotland.

Aberdeen Voice is pleased to offer readers the opportunity to read these letters, giving an important insight into this recent chapter of local history. While the Granite Web is truly consigned to the dustbin, the actions of those in positions of power who tried to foist the scheme on the public are still very much with us.