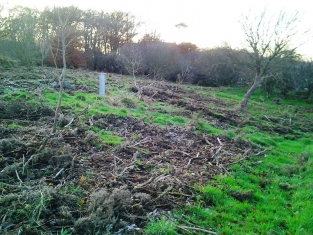 Despite the many firm arguments against the plan – a plan which included culling the deer which had wandered the Gramps for generations – a gung-ho Aberdeen City Council (ACC) went ahead. With Tullos Hill set to be planted with 89,000 trees in the scheme’s second phase, gorse and other indigent plants were ripped out, a process that left many birds and small animals homeless.

As one of the scheme’s mooted outcomes was to create a haven for wildlife, the illogicality was not lost on campaigners. Nor was the cost, which ran into thousands of pounds despite a council pledge the operation would be cost neutral.

The plan, to destroy existing meadowland and slaughter its native deer to create a woodland habitat in which, conversely, deer and squirrels could live, according to its supporters, was described by the Scottish SPCA as ‘abhorrent and absurd’.

Yet the council claims the project as a great success story.

So, what is the reality on the hill today?

In October 2012, Princess Anne presented the city with a certificate to mark its effort to create a Diamond Jubilee Wood on Tullos Hill. Patron of the Woodland Trust’s Jubilee Woods project, the princess presented the award to ACC Countryside Officer Ian Tallboys. According to the city’s publicity arm, Tallboys said:

“Tullos Hill is one of Aberdeen’s most popular beauty spots, so it is vital that we preserve and enhance this area for future generations.

“This ambitious project – part of the council’s award-winning Tree for Every Citizen scheme – has gone a long way to achieving that and it is great news that the hard work of everyone involved is now being recognised on the national stage.”

It all sounds very impressive, but let’s examine some of Tallboys’ claims about the scheme: 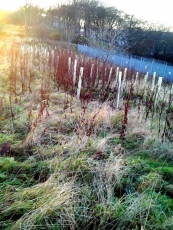 Ambitious? Well, no one could disagree with that. The scheme, largely cooked up as a LibDem election pledge, was so ambitious that not only the wishes of local people but the concerns of animal charities such as the Animal Concern Advice Line and Scottish SPCA were ignored

Preserved? The hill has been torn up, fenced off, its wildlife scared away or shot.

Enhanced? The hill is scarred and badly damaged, an area that was a noted beauty spot and in places, still is. The deer, scapegoats for the failure of Phase One of the scheme, have been shot.

Whether or not more deer move into the area (as most wildlife experts without a vested interest in the tree scheme advise), the scheme is as likely to fail in the second phase as it did in the first. For a start, the soil is almost non-existent (as a government soil report advised campaigners years ago), and what is there is filled with rock, stone and decades of debris from the hill’s long-standing use as a de-facto rubbish tip.

The soil report also cites weeds as a prime factor in the failure of trees to thrive, though being planted on a windswept hill adjacent to the North Sea would hardly promote healthy growth. The hill’s weeds are already doing their work, the trees so fought for by those who stood to gain from the scheme already being left to compete with weeds for nutrients in the soil.

Nothing like 89,000 trees were planted. Little or no planting has taken place where gorse has actually been removed from the site. Nothing has been done to make good the scarred areas of the hill and, despite claims to the contrary, the land seems simply too rocky and too filled with garbage to support healthy trees.

There is little evidence to support Tallboys’ declarations of achieving anything positive whatsoever. 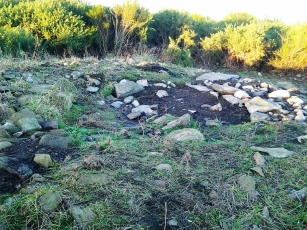 It is worth noting seabird populations in the area are down more than 50% since the 1970s; the loss of even more gorse habitat cannot help. Any similar exercise so lacking in public support and with such disastrous outcomes must not be allowed again.

Our intrepid reporter Suzanne Kelly will be writing to the Diamond Jubilee Woodlands Trust and Princess Anne’s secretary, including ‘before’ and ‘after’ photos of the devastation, details of the finances involved and proof of the lack of public support. She invites other interested parties to join her.

“I have absolutely nothing against trees or any well thought out environmental improvement scheme. But the Tree for Every Citizen project was carried out not only at all costs but against residents’ wishes, against the advice of experts and against the existing ecosystem that was in place.

“We now have a badly damaged meadowland, and meadowland is the fastest-disappearing type of ecosystem in the UK. In Aberdeen. I’ve seen meadows given up for development at an alarming pace while empty brownfield sites lie undeveloped.

“This situation needs to be addressed and in future the needs of all stakeholders taken into account. There must never be another ill-conceived, ego-driven, sorry excuse for environmental improvement like this again.”

P.S. CJ Piper, a company paid over £40,000 for its part in this scheme, helped prepare a report to the Forestry Commission which claimed only a ‘vociferous minority’ opposed the scheme; in it, proprietor Mr Piper suggested this ‘minority’ would quieten down after the deer were shot.

13 Responses to “Tree For Every Citizen: Award Winner Or Disaster?”