Dave Watt presents the second article of a series of 3 concerning ‘strops and arguments’ in the olympics.

May joy and good fellowship reign, and in this manner, may the Olympic Torch pursue its way through ages, increasing friendly understanding among nations, for the good of a humanity always more enthusiastic, more courageous and more pure : – Baron Pierre de Coubertin – founder of the modern Olympics. Athens 1896 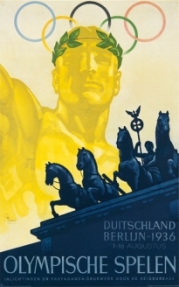 After some discussion in which the Germans put in a spirited bid Stockholm in Sweden was awarded the 1912 Olympiad with the unlucky Germans being promised the 1916 Games.

Stockholm introduced a series of firsts to the Olympics with the introduction of a electronic timing, a public address system and female athletes in the swimming and diving competitions with the last innovation causing an  Australian journalist to worry that the sight of women in bathing suits might incite lust amongst the spectators causing them to behave like ‘primitive blacks’.

The Swedish organisers banned boxing on humanitarian grounds but introduced the highly militaristic pentathlon in which the future megalomaniac George S Patton finished a disappointing fifth despite a diet of raw steak, salad and opium.

The usual growls and snarls began at the opening ceremony with the Finns opting out of the Russian team, the Czechs marching separately from their fellow Austro-Hungarian subject races and the Germans tramping around in formation eliciting boos and cries of ‘Prussian Militarism’ from the Swedes.

The usual racism was also on display with the US’s commendably diverse team being the subject of protests at non-white athletes ‘violating the Olympic ethos’ by having too much melanin in their skins.

Owing to World War One (having been unsuccessfully marketed as the ‘War to End Wars’ and the ‘War for Civilisation’ but eventually having to settle for the more prosaic ‘Great War’) the Berlin Olympiad didn’t materialise. The Germans consoled themselves by invading Belgium where, according to Allied propaganda, they bayoneted babies, raped nuns, shot civilians and threw poison gas around willy-nilly by way of endearing themselves to the locals.

Not surprisingly, the 1920 Olympiad, held in war-damaged Antwerp was rather low key and the Germans along with the Austrians, Turks, Bulgarians and Hungarians were all banned for picking the wrong side in the war and the Soviet Union was banned for presumably not having anyone closely related to Queen Victoria running their country. 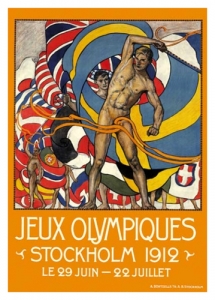 The first five were also banned from the 1924 games as well (not that the IOC are ones to bear a grudge) but the Soviets were sportingly allowed to eventually compete in 1952 whereupon they wiped the floor with every other country in the medals haul until they returned to the wonderful paradise that is free-market capitalism in 1990.

Having participated in a four year bloodbath the few participants in Antwerp games were pretty matey all round with the US bagging most of the medals and the newly independent Finland coming second with the legendary Paavo Nurmi taking three track golds.

The 1924 Paris Olympiad.  Eh…Eric Liddell not running on a Sunday, Harold Abrahams, Chariots of Fire, men running along beach in vest and pants, blah, blah blah.

While this delightful piece of Anglocentric nostalgia was going on the Finns bagged thirteen gold, thirteen silver and five gold medals which isn’t bad for a country which has roughly the same population as Scotland but is obviously less devoted to Scotch pies and crap lager.

Needless to say, the usual deranged elements in the European press obligingly attributed the Finns success to the ‘wild mongol strain’ of their savage ancestors.

Love and international understanding reasserted itself when a Frenchman severely thrashed an enthusiastic American fan with a cane during the Franco-American rugby match and William DeHart became the first black athlete to win an individual gold amidst the usual grumblings about non-whites participating.

Having pocketed two Olympiads the French decided to outsource the Olympics to Amsterdam in the Netherlands in 1928 which saw the introduction of the five rings Olympic symbol for the first time.

The huge US team garnered most of the medals despite being managed by another megalomaniac in the shape of Douglas McArthur who kept the athletes marooned on board a liner/prison hulk from which they were only allowed ashore to compete.

The re-instated Germans, having presumably promised that they would behave much better in any future wars, performed exceptionally well with eleven gold, nine silver and nineteen bronze medals, coming second in the medals haul.

Not surprisingly, this led to protests by impoverished and hungry people turning up bearing banners proclaiming ‘Groceries Not Games’.

After ‘some discussion’ the Olympic committee settled on Los Angeles for the 1932 Olympiad which saw the introduction of the first Olympic Village and the first major anti-Olympic protest over the games being held at all. In 1931, with a million unemployed in California and soup kitchens springing up all over the state, a massive press campaign gulled local voters into voting for huge funding for expanding and improving the Olympic facilities.

Not surprisingly, this led to protests by impoverished and hungry people turning up bearing banners proclaiming ‘Groceries Not Games’. One can sympathise with their point of view – I mean, what kind of idiots would spend millions on a pointless sports junket in the midst of a huge recession and massive poverty………..?

Thirty four nations turned up including a rather unpopular entrant in the shape of Japan which was engaged in the conquest of Manchuria at the time and attempted to hijack a a formidable Chinese sprinter resident there to run for their puppet state of Manchukuo.

The sprinter, Liu Changchun refused to run replying that “he would never betray his own nation to serve others like a horse or a cow” which is obviously not the view of the Scottish footballers in Team GB.

Predictably the US won forty-one gold medals but the surprise teams were the Italians who came second in the medals table and the Japanese who dominated the men’s swimming events.

Berlin 1936. When Germany was initially chosen to host the 1936 Olympiad it was a liberal democracy but by 1935, with the games one year off, Germany was a Nazi dictatorship with the racist Nuremberg Laws banning Jews from all aspects of civil life and attacks on their shops homes and persons becoming ever more frequent and ever more violent.

Consequently a great deal of soul-searching went on, particularly in the US, about the morality of sending a multi-racial team to the Berlin Olympics. There were campaigns for a boycott of the games both in the US and Europe while the Germans fudged the implications of their racial laws and hinted that Jewish athletes would be eligible for selection.

From the Nazis’ point of view Brundage was the ideal choice

However, as they were banned from participating in the qualifying events as they weren’t members of German sporting clubs having been expelled early in Hitler’s reign this wasn’t very likely.

Eventually, the IOC in the US sent Avery Brundage to discuss the situation with Hitler’s ’regime. From the Nazis’ point of view Brundage was the ideal choice as his bigoted and racist views permeated the Olympics (a bit like a polluted stream running through a children’s play park) for nearly forty years.

On arriving in Germany Brundage set out the ground rules early on by proudly announcing that he was a member of several clubs that barred Jews from their membership thus indicating that he wasn’t going to be too hard to deal with.

Despite Hitler’s previous assertion that the Olympics were ‘a plot by Freemasons and Jews’ the Nazi regime was very interested in holding the games and assurances that multi-racial teams would be welcomed and treated equally were forthcoming.

This turned out to be quite genuine and black athletes like Jesse Owens and high jumper David Albritton were accommodated in the Olympic Village whereas they weren’t allowed to live on the campus where they studied at Ohio State University.

The Jewish athletes competing for Germany was more problematical when the world-rated Gretel Bergmann (classified as a full Jew by the Nuremberg laws) was told that her qualifying jumps were not of sufficient quality to allow her into the national team. As she emigrated to the US and won successive trophies there it’s a pretty fair bet that she could have qualified for the rather poor German womens high jump team if she’d jumped while carrying her week’s shopping.

A compromise was reached whereby blonde haired, green-eyed Helene Mayer, rated as only a half-Jew and resident in the US was allowed to compete as an honorary Aryan for the duration of the games where she won a silver medal.

In a little known attempt to “clean up” Berlin (which would surely endear him to the leader writers of a certain present-day local rag) , the German Ministry of the Interior authorized the chief of police to arrest all Romani/Gypsies and keep them in the Berlin-Marzahn concentration camp during the games.

Protests about the games in Britain were more subdued and Harold Abrahams, winner of the 1924 100 metres, undertook a lot of work to persuade fellow Jews in the country not to boycott the Nazi games. Presumably, he spent much of 1945 removing these particular endeavours from his CV.

Anyway, the Berlin Games went ahead with forty-nine nations competing, Germany winning 89 medals, including 33 golds and the whole event was wonderfully filmed by Leni Reifenstahl who was very pleased with her cinematic efforts until she discovered that Hitler was a Nazi in 1983.

Contrary to popular belief about the Berlin Olympics Hitler did not actually snub Jesse Owens. Hitler had greeted all the winning German athletes on the first day with a handshake and some Fuhrerly chit-chat but was told by the Olympic Committee that he either had to personally greet all of the winning athletes or none of them and he chose the latter course.

Consequently we can excuse Adolf from that particular breach of good manners – however, on the down side, there is just that little matter of fifty million war dead.