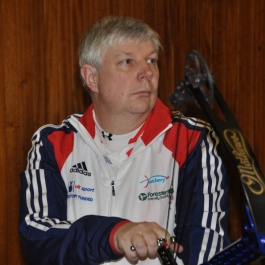 Turriff’s Alasdair Hamilton will have to wait until the middle of May to find out whether he has made it in his quest for a place in the Great Britain Archery Squad for the London 2012 Paralympics later in the year.

The squad was due to be finalised at Lilleshall National Sports Centre in Shropshire over the weekend – only for atrocious weather conditions to force the cancellation of the second day’s action.

Broch Archery Club member Alasdair is one of four men competing for just two places in the men’s compound, and the selection shoot will now resume at the same venue of the weekend of 19th and 20th May.  After the opening day, Alasdair is in third position on 1269, just behind Richard Hennahane on 1279, with fellow Englishman John Stubs leading on 1348.

“It’s really disappointing, but we simply had no choice but to call it off as what we don’t want is anyone picking up an injury, or a cold, by being out in the rain all day.”

No sport has as great a Paralympic history as Archery. It featured at the first Stoke Mandeville Games in 1948, the modern Paralympic Games’ predecessor, and has featured on every Paralympic programme since the first Games in 1960.

Although Archery was originally developed as a means of rehabilitation and recreation for people with a physical disability, it rapidly evolved into the internationally competitive sport on show at the Games today. The competition procedures and rules for Paralympic Archery are nearly identical to those used in able-bodied competition.