Mike Shepherd has  lodged a complaint in a letter to Aberdeen City Council Chief Executive Valerie Watts regarding the recently published TIF business case. Mike shares the content of the letter with Aberdeen Voice readers. 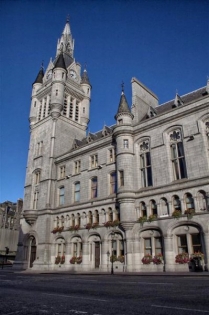 To The Chief Executive, Aberdeen Council

I am lodging a complaint about the TIF Business Case “Aberdeen City Centre Regeneration Scheme” which has been written as a report to inform a council vote in August. This document should be a disinterested analysis of the case, or otherwise, for Aberdeen Council borrowing £92 million through Tax Incremental Financing (TIF).

It is not. The report is a constructed narrative that contains major factual mistakes, errors of omission, false statements and flawed data. It is not credible.

The key argument of the report is based on input by private developers and their advisors who have a clear interest in a positive outcome to the council vote.  The conclusions of the report are therefore incompetent.

I request that Aberdeen Council withdraw the TIF business case as unfit for purpose.
http://www.aberdeencity.gov.uk/TIF_business_case

The details of my complaint are as follows:

“It is expected that a further £20 million of funding will be secured via Grants and other funding mechanisms to enable the City Art Gallery Redevelopment.”

This is incorrect. There is no identified £20 million funding for the Art Gallery. Council minutes show that the appropriate figure is £4 million.

The £20 million figure stems from an unrealistic aspiration to apply for funding from the Scottish Heritage Lottery Fund (SHLF):

“Both the Art Gallery redevelopment and a Museums Collection Centre would be eligible to apply for Heritage Fund Lottery grants, although the value the City Council would wish is beyond the annual allocation, which for all of Scotland is currently £20 million.”
http://committees.aberdeencity.gov.uk/mgConvert2PDF.aspx?ID=7314

The Council have yet to apply for funding from the SHLF and intend to do so later this year, in November. They have approached the SHLF:

“Officers have also discussed the current status of the project with the Scottish office of the Heritage Lottery Fund; the Fund advises that if matched funding can be raised within the City, then their Board would accept this as the Council’s contribution to the project within the application.

“The Art Gallery redevelopment is also included as one of the projects within the Tax Incremental Fund BID to the Scottish Government and if this is successful, that funding can be counted as part of the city’s contribution.”
http://committees.aberdeencity.gov.uk/mgConvert2PDF.aspx?ID=18050

The Art Gallery component of the TIF application is for £4 million (Ref: Table on page 42).  Matched funding from the SLHF for the TIF sum would be £4 million, not £20 million.

In the table on page 42 it is also stated:

“The TIF Scheme creates the opportunity to invest in the City Art Gallery and even if after this investment the City of Culture bid is unsuccessful, the City will still have a state of the art asset for future generations to enjoy, as a result of the TIF mechanism.”

This is misleading. The Art Gallery redevelopment costings are as follows:

“The Development Study was fully funded by the Marguerite McBey Trust. Gareth Hoskins Architects provided an options appraisal in 2010 outlining 5 schemes ranging in scale and costs from £15.7m to £24.3m [2010 prices].”

TIF plus matched funding from the SHLF would only account for £8 million of the total sum required. The conclusion that “the City will still have a state of the art asset for future generations to enjoy, as a result of the TIF mechanism” is false and incompetent.

On page 11 there is a statement concerning private funding for the City Garden Project:

“This includes £55 million that has already been pledged to the City Garden Project by private donors and a further £15 million to be raised”.

It is also mentioned that Aberdeen Council are confident that the extra £15 million can be found even though that this has been an unfulfilled aspiration for the last two years. Although the full £70 million has not been pledged, this figure has been assumed as valid for the rest of the report.

By page 42 this has become “funding identified from existing sources: £70 million.” This is incorrect, only £55 million has been identified.

On page 89 the conclusion states:

“The estimated total cost of the assets and enabling infrastructure for the TIF Scheme is £182 million.

“Pledged donations towards the City Garden Project of £70 million and potential grants for the City Art Gallery of £20 million creates a public sector investment requirement of £92 million, or marginally over 50% of the total cost, which will be borrowed by ACC as part of the proposed TIF Scheme.”

This conclusion is incompetent. The sums are wrong.  A consequence of this blunder is that Aberdeen Council may be required to borrow more than £92 million to ensure that the ‘city centre regeneration project’ is enabled.

The report quotes extensively from the conditions voted through at the January 25th Council meeting. However, I have failed to find the following information mentioned.

From the report to Council of 25th January and voted through:

“Instructs officers to enter into negotiations with a view to putting in place a development agreement with Aberdeen City Garden Trust (ACGT) and/or their representatives, which sets out the terms upon which Aberdeen City Council (ACC) would be prepared to make necessary Council owned land available, to realise the proposed development described in Appendix 1 of this report after 1st March subject to;

“(x) Requires ACGT to confirm, in a legally binding form, that they have access to at least £70 million of private sector funds to invest in the CGP, prior to the signing of;

“a. An appropriate Development Agreement, and

“b. A TIF agreement confirming ACC’s ability to invest at least £70 million in enabling infrastructure related to the CGP. “

In other words, councillors have already decided that if the extra £15 million of private investment is not guaranteed, they are not going to apply for TIF funding. This should have been stated in the business case.

Part of the justification for the City Garden Project is based on a questionnaire that was sent out to two selected groups in Aberdeen. This covers several pages of the report. One ‘cohort’ was a small group of 35 developers, landowners and agents in the City Centre area; the second comprised

They got no replies from the first group (“a small response”), and later tried to phone them to get any views at all. Eventually seven people replied and several pages of analysis ensues in the report based on the comments of only seven individuals. There was a bit more interest from the second group, a group that included me.

I found that the questions were framed in such a way that it was virtually impossible to register any negative opinions about the City Garden Project. By dint of answering almost all the questions you ended up agreeing that the project was worthwhile.

“Considering each of the development schemes, which of the following benefits do you envisage they might deliver to the wider Aberdeen City economy?”

There is a clear intentional bias to the questionnaire that looks designed to elicit positive statements in favour of the City Garden Project. My opinion is that this is propaganda not data, and it should have no place in what should have been a dispassionate report informing councillors regarding the decision they have to make about the TIF business case.

The bottom line of the business case is that the City Garden Project will “will act as a catalyst for regeneration and economic growth” in Aberdeen and gives “The potential to unlock significant private sector investment and generate up to 8121 jobs and an average of £142.0 million per annum of economic growth over 25 years.”

The business justification is that take up of commercial space in two large business parks being built in the north of the city will be significantly under-subscribed unless the City Garden Project is built. An additional assumption concerns extra business activity in the city centre.

There is no discussion concerning how these assumptions have been made, yet this is the crux of the business case. We are being asked to trust that these assumptions are valid without any cogent analysis provided.

Yet, trust is a major issue concerning these assumptions. On page 74 under the section “ASSESSMENT OF NEW DEVELOPMENT AND BUSINESS RATES UPLIFT” we read that:

“In undertaking this assessment of development uplift ACC has received specialist research support from property advisors CB Richard Ellis as well as input from ACGT and PwC.”

The relationship between CB Richard Ellis, PwC and the Aberdeen City Garden Trust is made clear on page 52:

“ACC, with support from ACGT Enterprises and their advisers (PwC and CBRE)”

Thus it appears that major input has been provided to the critical argument in the business case by Aberdeen City Garden Trust and their advisors. A private company seeking to take over a lease and operatorship of council property, has been allowed to dictate input to a report recommending that  Aberdeen Council borrow £92 million for a project in which the company has a direct interest. This is entirely inappropriate.

The Aberdeen City Garden Trust has a clear interest in a positive outcome for the City Garden Project. They and their advisors should not have been allowed to have input into this report.

Aberdeen Council operates at both a corporate and political level. Politicians make policy while key council officials provide a detailed examination of the background that commonly informs the decision making process.

In this regard, it is important that council officials provide a rigorous and dispassionate analysis, with any recommendations based on logic and a clear basis for the arguments that have been set out to justify these recommendations. In the report detailing the business case for the City Garden Project and other ancillary schemes, they have failed abysmally.

The most recent version of the business case is a travesty of synthesis and thesis. Rather than setting out a well argued case leading from careful marshalling of data towards a conclusion, the report appears to proceed from conclusion (the City Garden Project is a good thing) via a constructed narrative that includes mistakes, flawed data and wishful thinking.

Given that a consequence of this report is that Aberdeen Council could end up borrowing £92 million on the basis of ‘economic regeneration’, this may result in major reputational and financial damage for the council. The vote to approve submitting the business case to the Scottish Government is likely to take place in August this year.

The TIF business case should be withdrawn immediately as incompetent and unfit for purpose.