What is the probability that the City Garden Project will actually happen? Mike Shepherd looks at some of the obstacles it currently faces.

The City Garden Project cannot proceed if £70 million of private finance is not in place to fund it: 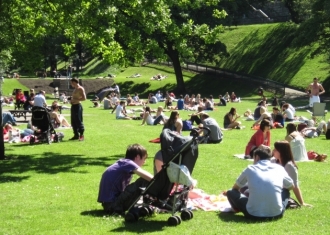 Aberdeen Council voted in January to agree the following:

“Instructs officers to enter into negotiations with a view to putting in place a development agreement with Aberdeen City Garden Trust (ACGT) and/or their representatives, which sets out the terms upon which Aberdeen City Council (ACC) would be prepared to make necessary Council owned land available, to realise the proposed development subject to;

“(x) Requires ACGT to confirm, in a legally binding form, that they have access to at least £70 million of private sector funds to invest in the CGP, prior to the signing of;

a. An appropriate Development Agreement, and

b. A TIF agreement confirming ACC’s ability to invest at least £70 million in enabling infrastructure related to the CGP.”
http://committees.aberdeencity.gov.uk/mgConvert2PDF.aspx?ID=18252

A council vote to give final approval to signing the Tax Incremental Financing (TIF) agreement will probably come up this summer. This is basically a request for a £92 million loan from the Scottish Government, £70 million of which would fund the City Garden Project.

The £55 million of pledged private money has been on the table since early 2010 and the full £70 million remains an unfulfilled aspiration two years later. The funding gap of £15 million will be difficult to make up.

One issue is that big companies who could afford to make donations on the scale of millions may be reluctant to get involved with such a controversial project.  They will not want to come under severe criticism from either the public or their workers.

Sir Ian Wood could come up with the extra £15 million, perhaps anonymously.  This would however be an admission that the project has failed to motivate the business community in the place where it matters: the bank vault.

The TIF business case is risky:

Noted academic Professor Tony McKay has criticised the business case for public funding through TIF as “the worst he’s seen this year”.

Claims that the project will create up to 6500 jobs and add £122 million per year to the city’s economic output are ludicrous, he says. He thinks that the Scottish Government will reject the application for a loan from central funds.
dailyrecord.co.uk/aberdeen-city-garden-business-plan-is-worst-i-ve-seen 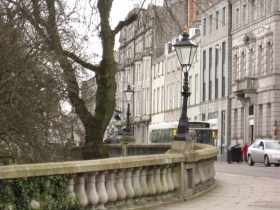 TIF funding is based on the idea that without the core project, new businesses will not happen. These are the “But For” criteria that give the green light for putting a new TIF scheme in place. The new businesses created provide business rates to pay for the loan.

The Aberdeen business case contends that much of the commercial activity in two new business parks in the north of the city, and in the city centre, will not happen without the City Garden Project.

I suspect that few truly believe this, as the new business parks will attract inward investment to the city on the back of a currently resurgent oil industry anyway.

Nevertheless, I suspect that the Scottish Government will give a few knowing nods and winks to the “But For” criteria here. They may be amenable to allowing new business rates to be captured to pay off the Council’s loan of £92 million for the proposed city centre redevelopment.

But will it be enough? The business case makes it clear that the revenue will pay off the £92 million loan and accrued interest with a small margin to spare after 25 years. And required to do this are 6,500 new jobs and £122 million added to the city’s economy each year for the next 25 years, a “ludicrous” estimate as mentioned previously.

Let’s take the lesser case whereby the city gets 5,000 new jobs and about £100 million per year of added value. This would also be miraculous news for Aberdeen if it were to happen, but it would be a disaster for Aberdeen City Council. The council would be left with a shortfall on a very large loan. It might have to sell off assets to pay the difference.

Audit Scotland was aware of these problems when it expressed concerns about the City Garden earlier this year, stating that “a key risk will be the affordability of the project and its impact on the council’s finances”.
[Audit Scotland: ACC Annual Audit Plan 2011/2012 p. 10]
http://committees.aberdeencity.gov.uk/mgConvert2PDF.aspx?ID=18879&txtonly=1

The land issues are complex:

At some point Aberdeen Council will have to approve a deal transferring property rights to the Aberdeen City Garden Trust (or its equivalent). This deal would be likely to involve assigning a long-term lease, and the council have said that they will not sell the land.

There are major issues here, not least those arising from transferring what would be a property lease for public land, potentially worth millions, to a limited company.

Union Terrace Gardens lies on Common Good land and at some point the Council would have to apply to a Court of Session to allow development to take place.  Additionally, there are contracts in place for the use of Union Terrace Gardens as a park. A legal document from 1871 states that the area of  Union Terrace Gardens should on no account “be appropriated to any other use than that of a recreation ground for the public.”

“The gardens will be run on a not for profit basis. All income will be put back into the running costs for ongoing upkeep and improvement of the gardens. The City Gardens will be able to generate income through activities held within the park; exhibitions, conferences and returns from coffee shops and restaurants.”
http://www.thecitygardenproject.com/faq.htm

I’m not a lawyer, but these issues look to be somewhat contentious. The January council meeting approved the allocation of up to £300,000 of council money to be spent on carrying out legal due diligence for the City Garden Project. The council lawyers must be very worried.

The new council make-up is not favourable to the City Garden Project:

The last council progressed the City Garden Project through its voting procedure with a comfortable majority on most occasions. 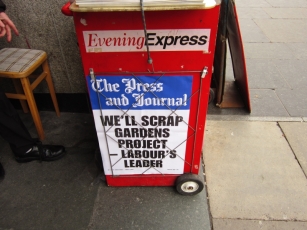 The new council looks to have an almost equal split between the ‘pros’ and the ‘antis’.
In addition, the Labour Party leading the new council administration has pledged to kill the City Garden Project.

There will be several votes to come, including a likely knock-out vote at the full Council meeting on August 22nd.

The City Garden Project will also need to survive the TIF business case approval, the development agreement and the planning submission.

This is an administration that will have other concerns. I’m told that central funding for Scottish councils is being cut by millions over the next three years, yet only 18% of the cuts have come through so far. The last thing any new administration will want is the divisive distraction of the City Garden Project and its potential to suck much-needed resources out of the council, for example the £300,000 on legal fees.

The City Garden Project could itself be described as a cuckoo in the nest; its big yawning mouth crying to be fed with big gobbets of public money while other more deserving mouths lack succour. A hard landing beckons for this particular cuckoo.

39 Responses to “Cuckoos In The Nest: Latest In Aberdeen Gardens War.”