Gubby Plenderleith, our Special Correspondent for Arts, Culture and the Media, reports on the ground-breaking pilot for a new reality TV show. 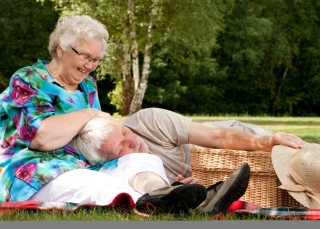 It’s forty four years since Andy Warhol first forecast the future in which everybody would be famous for fifteen minutes.
That future has well and truly come and while not everyone has achieved fame, the current crop of reality TV shows has ensured that far more people than ever have realised a degree of celebrity that could never have been envisaged in 1968.

But while reality TV to date has favoured the younger members of its audience – the Club 18 to 30 of society if you like – production company Endthemall is currently piloting a show where the stars will all be senior citizens.

The idea of the show is for a group of pensioners to share a house for two weeks, with a range of tasks, treats and penalties being administered by ‘Big Daddy’ in order to see how they interact.

The working title for the show is Grandad’s House and, having been lucky enough to be invited to view some of the footage which has already been recorded, I offer you below a taster of what we can expect to see when the show is aired nationwide.

6.13 pm     Bill and Gladys are tidying up in the kitchen.  Rose prepared the tea tonight – sausage rolls and alphabetti spaghetti – and is now fast asleep on the couch beside Tom, who’s slowly packing the few remaining strands of what’s still left of this week’s Tam o’ Shanter into his pipe.  Meanwhile, in the boys’ bedroom, Jack has stretched out on the top of his bed and snores gently, the gentle rhythm broken only by the occasional expulsion of flatulence.

6.42 pm     Bill and Gladys have finished in the kitchen and gone into the garden.  Bill’s trying to play bowls, but the chickens keep escaping from their pen and cluster around the jack.

Maggie, who’s been trying all week to get one of the boys to hold his hands out in the regulation manner in order that she can wind her wool, has given up and sits quietly on the deck area.

“Have I?” asks Matt and tells them again.

7.02 pm     The Housechums, having successfully completed this week’s task – staying in bed until 7 o’clock on at least one morning – are putting together their shopping list.  Gladys is again lobbying for an extra bottle of Sanatogen Wine, while Matt reminds everyone that the ten cartons of Steradent they ordered last week have already run out.

7.11 pm     Jack appears in the living room and tells everyone that there must be something wrong with the drains.  They ask him why and he tells them that there’s one hell of a smell in the bedroom.

7.14 pm     Maggie shuffles into the living room and asks if anyone knows where the Rennies are.  Jean, who’s been sleeping quietly in the corners, wakes up tells her they’re where they always-bloody-are!  Maggie asks her where that is and Jean tells her she knows damned fine before nodding off again.

Matt starts to tell her about a sergeant named Rennie who was in the Black Watch with him, but she tells him not to start and waddles off to the girls’ bedroom.

7.21 pm     Matt asks Gladys if it’s time for tea yet and Jack tells him they’ve already had their tea.  Matt asks him what he had and whether he enjoyed it.

7.27 pm     Big Daddy tells the Housechums that, as a special treat, they’re to be allowed to watch Coronation street tonight.  Maggie and Gladys both tell everyone that it’s their favourite programme and how that Gail Tilsley’s no better than she should be.  Jack says it’s a load of pish and Matt starts to tell them how old he is but falls asleep before he finishes the sentence.

7.34 pm     Gladys, Maggie and Jean sit watching television when Bill wanders in from the garden and ask them what crap’s on the telly now.  They tell him that Big Daddy is letting the Housechums watch Coronation Street as a special treat.

Bill tells them that the only reason he came into the Grandad’s House was to get away from bloody Coronation Street, bloody East Enders and bloody Emmerdale.  They tell him that he missed out River City and he tells them that it’s the best bloody programme on the bloody telly and how he’s always been interested in boats and sailing before going back out to the garden.

7.42 pm      During the commercial break Jean goes into the kitchen to put the kettle on while Jack and Tom get up to go to the toilet.  Maggie asks them where they’re going and, when they tell her, she reminds them that this will be the third time they’ve gone in the last hour.

Matt tells them how convenient his colostomy bag is.

7.57 pm     With Coronation Street finished, the Housemates hope that Big Daddy will let them watch the next programme but the screen goes blank.

8.02 pm     The Housechums have returned to compiling this week’s shopping list.  Maggie and Jean are discussing the relative merit of two different brands of pork luncheon meat, while Jack tells them not to get any eggs as he’s been bound for the last five days.

8.13 pm     Bill comes in from the garden and announces that he’s going to his bed.  The Housechums all agree that this is an excellent idea as they’ve got to be up early in the morning and join him.

Clearly Endthemall have worked their particular brand of magic again and we can look forward to yet another example of the kind of reality TV that has made British broadcasting what it is today.