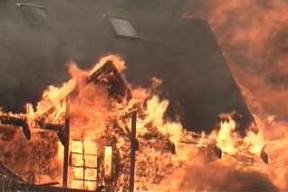 All nuclear bomb explosions cause many small fires; these can coalesce into one massive fire known as a firestorm.

As the fire heats the air it causes winds of hurricane strength directed inward towards the fire, and this in turn fans the flames.

In Hiroshima a firestorm developed. About 4.4 square miles were utterly destroyed.