In the wake of the local council elections in which the issue of developing Union Terrace Gardens appeared to play a major role, Craig Adams was compelled to write to the newly elected council ahead of a meeting which may well determine the progress of the City Garden Project. Craig shares his letter with Aberdeen Voice readers. 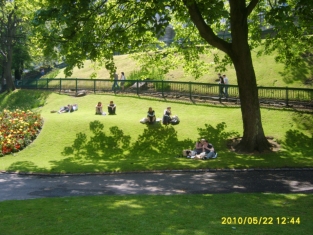 I am writing to you with regard to the upcoming vote on The City Garden Project. The issues surrounding this project have been extensively debated, and to revisit them would be a waste of an email.
I’m guessing that many of you will long ago have formed your own personal opinion on the project, whilst others will, like your constituents, remain in two minds.

Instead, this email will concentrate on issues surrounding the recent public referendum.

I am not a supporter of any particular political party. At local elections I vote solely on the credibility and apparent integrity on the individual candidates. In national elections I usually spoil my ballot paper (and make no excuses for doing so). There is no political agenda here.

Many experts are sceptical of referendums, a view that some of you no doubt share. The purpose of representative democracy is largely to ensure that the people taking the decisions have thoroughly researched the details. Few people voting in a referendum are unlikely to be as well – informed.

It’s somewhat counter-intuitive that the larger the response to a referendum, the less informed the decision is likely to be. While referendums are a necessary part of democracy they are only appropriate under certain circumstances, and must be applied with great discretion.

Referendums work best when the facts are few and the choice is simple. A divided result is not a good outcome. There also needs to be a clearly defined winning line, its position determined by the context of what is being proposed.

There were several other issues surrounding the referendum on The City Garden Project, beyond whether or not it was appropriate or conclusive. The first was the wording of the question. I recall as a teenager going shopping with my mother for a new school uniform. The trousers that she picked were unfashionable. She told me “well it’s either those or you go to school in your underpants”.

The referendum question was loaded in a similar way, in that it ignored any option for Union Terrace Gardens other than Sir Ian Wood’s desired outcome. The implication being – this or nothing. The propaganda that followed reinforced the message that Union Terrace Gardens would be left to rot unless the CGP was built. In my experience the electorate were not split into two camps as has been suggested, rather there were those who wanted:

(b) some sort of improvement

(c) any sort of improvement except the CGP

(d) UTG restored and improved or

(e) no money spent at all

You’ve doubtless encountered that same spectrum of views amongst your constituents.

The question was not a good fit for public sentiment. On the subject of Scottish independence it is claimed that minor syntactical changes could be worth a swing of 15%. While it’s debatable whether that figure is accurate, there’s no doubt that choice of wording does exert significant influence. In this case it’s not inconceivable that it exerted enough influence to alter the outcome.

The second issue concerns the fairness of the PR spend. The original consultation process was entirely about The City Garden Project. The design contest was also wholly about the CGP. Both of those exercises were orchestrated by a PR company. There’s also the whole controversy surrounding the ‘unregistered CGP campaign group'(?) who leafleted every home in the city.

Taking everything into account it’s clear that there was a substantial disparity in PR spend, and that is simply not fair. The problem with this is that it gives the wealthy and powerful the impression that PR companies can engineer referendums to produce specific outcomes, and that it boils down to a matter of risk vs. reward. Allowing that to pass without comment introduces a dangerous precedent.

Finally there is the issue around the integrity of the result. The Returning Officer has not permitted anyone to examine the marked register. While that position may comply with the specific lettering of ‘a law’, it certainly does not adhere to the spirit of The Law. This is extremely pertinent as the result was close and there is considerable contention surrounding various aspects of the voting.

For those reasons I’d like to make two basic points surrounding the referendum on The City Garden Project:

1) A referendum was not appropriate in this instance.

2) A poorly fitting, badly worded question and one-sided PR spend, resulted in an outcome that was far from conclusive.

Based on the above, and also taking into account questions over the integrity of the vote, it is clear that the course of this referendum was perverted. In my opinion, the closeness of the result, combined with disagreement over what constitutes conclusive, and the questions surrounding it’s integrity, effectively render the outcome of the referendum invalid…

…however from the result it can be inferred that the public are in favour of improving the gardens – just as they are generally in favour of regenerating the rest of the city centre, but we didn’t really need a referendum to discern that truth.

What I’m asking you to do, is to set aside the outcome of this disastrous referendum when you vote on the future of Union Terrace Gardens, and instead vote for whatever you believe is both right for this city, and truly representative of what people want. That’s why we elected you.

Walk in the Light
Craig Adams