Anthony Baxter takes time out again from promoting his film to update Aberdeen Voice readers.  Don’t look for the story in the Press & Journal.
Don’t look for any updates in the Evening Express.  Except for STV, Northsound, and of course the Voice – as far as the local press is concerned, IT NEVER HAPPENED.  Now read on… 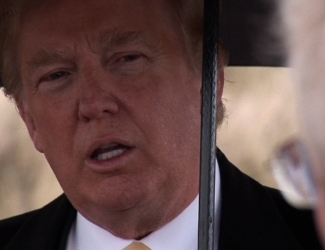 The Scottish-made documentary ‘You’ve Been Trumped’ scooped its second major film festival award in as many months after clinching the Special Jury Prize at Michael Moore’s prestigious Traverse City Film  Festival, which has just drawn to a close in Michigan, USA. Oscar-winning director Moore was present for the awards at the City’s famous State Theatre – a renovated classic cinema dating back to 1916.

“This is a huge honour and we’re delighted to accept this award,” said Anthony Baxter.

Producer Richard Phinney also attended the ceremony – the filmmakers were among a record 100 brought to Michigan with the help of a grant to the festival from the Academy of Motion Pictures Arts and Sciences. 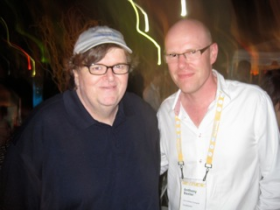 The festival was founded by Academy Award-winning Director Michael Moore, who runs the festival and serves as president of its board of directors.

The 95-minute feature documentary You’ve Been Trumped tells the story of the American  tycoon Donald Trump building a golf course resort on one of Scotland’s last wilderness areas north of Aberdeen.

Branded ‘a failure’ by the Trump Organisation, You’ve Been Trumped proved to be a sell-out hit at its World Premiere at Hot Docs in Toronto in May (despite claims from Creative Scotland that ‘nobody would watch it’).

The film has since played to packed cinemas through special preview screenings in major cities across Scotland in association with Take One Action and also as part of the acclaimed Stranger than Fiction series at New York’s IFC Center.  Further screenings are on the way (see last week’s Voice for listings).

Taking to the stage in Traverse City with fellow filmmaker Phinney to receive the award, Baxter thanked the hundreds of crowd-funders who had supported the film.

“We were refused all funding to make You’ve Been Trumped and so I’d like to say a special thank you to the hundreds of people from around the world who enabled us to finish the film with donations from twenty countries.”

A tribute was also paid to Michael Moore for inviting the film to the festival along with dozens of other world-class award-winning documentaries – as well as to the 1300 volunteers who made the seventh outing for the Traverse City Film Fest was the biggest yet.

Other Traverse City Film Festival documentary winners included HBO hit Hot Coffee (The Documentary Everyone in America Should See Award) whilst Best Activism in a  Foreign Documentary went to BBC Storyville‘s Give Up Tomorrow. 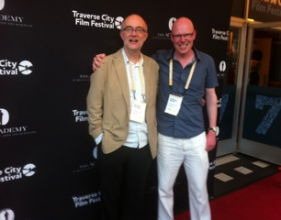 Nearly 130,000 people flocked to watch ‘Just Great Movies’ across the six-day Traverse City Film Festival where George Lucas gave special permission for crowd-puller Star Wars Episode V: The Empire Strikes Back to be screened in the open air for the very first time in front of thousands of film fans from around the world.

The Special Jury Prize for You’ve Been Trumped comes just a month after the film won Britain’s top environmental prize for documentaries with the Green Award at the Sheffield International Documentary Festival (Sheffield Doc/Fest).  Then, the international jury lauded the film for:

“exposing one of the worst environmental crimes in recent UK history.”

(No word yet as to whether the Press & Journal or its sister paper have discovered the existence of ‘you’ve been trumped.’)

The Traverse City Film Festival is a charitable, educational, non-profit organisation committed to showing “Just Great Movies” and helping to save one of America’s few indigenous art forms – the cinema.  The festival brings films and filmmakers from around the world to northern Michigan for the annual film festival in late July. It was instrumental in renovating a shuttered historical downtown movie house, the State Theatre, which it continues to own and operate as a year-round,
community-based, mission-driven and volunteer-staffed art house movie theater.  A full list of award winners can be seen here.

You’ve Been Trumped will now receive a special London preview at the Frontline Club (12 August) and will be screening for a week at the DCA Dundee later this month (19-25 August) before going on to the Sidewalk Moving Picture Festival in Birmingham, Alabama (26-27)
August.  The film will also headline the Edindocs film festival (16th September) and a screening is being planned for the Scottish Parliament.