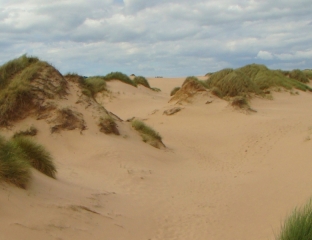 Money talks, but of late the people of Scotland have been notably quiet. Few people have been unaffected by the recession and the country is bracing itself for the looming cuts within the public sector. The people of the Northeast however can take some solace from the fact that their main industry for the last couple of decades is still going strong.

I often wonder what would have become of Aberdeen and its surrounding area had ‘Black Gold’ not been discovered, what with the demise of fishing, and a tourism industry that is still struggling to take off. Corporate machines flocked to the area to cash in on our newfound discovery and the good people of Aberdeen welcomed them with one hand and grabbed a fistful of dollars with the other.

I do not condone Donald Trump’s bullying tactics, but have the foresight to see that this is an opportunity that cannot go a begging

Aberdeen is now one of the most affluent areas in Scotland if not the UK, and the rest of the country look on with glowing green eyes. Yet we have been repeatedly warned that these good times will not last forever and in the next 20 years or so, if experts are to be believed, oil related employment will continue to fall and signal the exodus of Johnny Foreigner and his Yankee Dollar.

A stroke of luck then that an American Billionaire has chosen ‘God’s Country’ to host one of the world’s premium golf developments. Not so, according to a small minority who would rather reject any form of investment in order to get their faces in the national press.

Whilst I feel slightly sorry for Mr Forbes et al at facing the prospect of a CPO, any sympathy I have is outweighed by the prospect of the area that I was born in and raised being decimated by a lack of investment and surely going the same way as some of the impoverished areas in the north of England.

I do not condone Donald Trump’s bullying tactics, but have the foresight to see that this is an opportunity that cannot go a begging. Did the people who so vehemently oppose Trump and his millions also stand up and react so vocally against Shell, BP, Chevron etc, the masters in bullying and harassment of people and governments?

The simple fact is that investment of this magnitude should not be sniffed at. The doors that this development will open could provide a significant and sustained income for the region and may allow the good times to continue.