Last week in Aberdeen Voice brought you part one of Alan Gatt’s examination of where Aberdeen and Aberdonians are going wrong, and focussed on flexicurity. This week, in part two Alan looks at how the city may be affected by the Dutch Disease, Affluenza and Hyperreality. 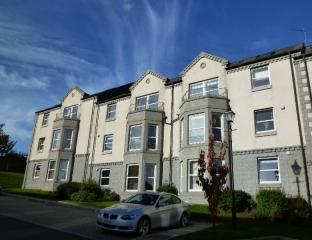 There’s a concept in economics called the Dutch Disease – which explains how the development of a natural resource extraction business sector (like oil and gas) and its associated economic boom can over-balance an economy, causing decline in non-extractive value-adding sectors – particularly the manufacturing sector, but also in agriculture.

The pathology of the Dutch Disease is accompanied by moral decline in the personal sphere – affluenza – and turpitude in the public sector and government as they becomes entangled with big-money business interests. Hmm… sounds familiar.

The term was coined to describe the decline of the manufacturing sector and moral fall-out in the Netherlands in the 1970’s following the discovery and exploitation of the gigantic Groningen gas field. The worlds largest ever public-private-partnership (Gasunie) was formed by Shell, Esso and the Dutch State to exploit this resource. At its height, it was not possible to say where the state ended and Gasunie began. Or vice versa. The question was meaningless.

The booming sector (resource extraction) increases the demand for labour and capital which in turn causes the movement of production away from other sectors (in particular, away from value-creating manufacturing and agriculture).

This is compounded by what some economists call the ‘spending effect’: As personal wealth (for some) increases, it causes an increase in demand for capital and labour to be directed towards the service sectors (including business and personal services, catering, retail and real estate). This, of course, further draws production away from the manufacturing sector and agriculture.

Moreover, this increased demand for service sector goods leads to an increase in prices for these goods and services. The price for the primary resource in the booming resource sector (in our case oil and gas) is set internationally, and so cannot be affected by local economic factors. As price levels for service sector goods and real estate in the local economy boom, this increases the effective exchange rate for individuals and enterprises looking to move into or out of the area. Of course, we are part of the UK and use GB Pounds Sterling as our medium of exchange, it’s just that, in this town your GB Pounds exchange for fewer service-sector goods (from haircuts to pints in the pub to real estate) than they do in most of the rest of Scotland.

It operates like the event horizon of a black hole; there comes a point of no return – a point where it becomes almost impossible to do anything within the local economy which is not in some way dependent upon flows of cash from Oil and Gas. “Prosperity without freedom is just another form of poverty”.

One of the first answers to the question “where is Aberdeen going wrong?” is to question the question itself. Is Aberdeen, indeed, going wrong? Or is there something else? As I type this, I’m looking out of a north-facing window which overlooks the rooftops of Rubislaw, the sun is low and dramatically highlighting the teracotta chimeypots and grey slate roofs and silver-grey gables of the west end. Contrasting with the azure blue sky and puffy white clouds and highlighted by the remaining copper-gold leaves clinging to the serried trees which line the many stately avenues of the Victorian town, nothing much seems very “wrong” with Aberdeen from here. It’s gorgeous.

All very picture-postcard, but a nice view doesn’t mean that all’s well behind closed doors. In new-build housing we see a sort of sickly pastiche of past glories, and so we wonder to ourselves why people find themselves drawn to that style; who controls the message? Let’s consider the life of someone I know (it’s not really anyone in particular, rather it’s a hybrid, a composite – made up of many individuals and actions – some of which are me and mine, from a past life). This is a man who recently bought just such a ‘traditional’ (pastiche) house in one of Aberdeen’s metastasising exurbs. Maybe the question should be not “where is Aberdeen going wrong?”, but rather “where are Aberdonians going wrong?” His is a story which is all about ‘messages’: 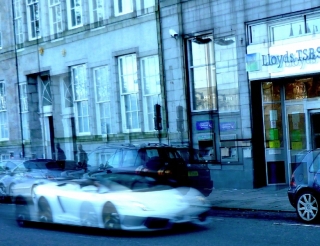 The exterior of his new house is a message, his brand new possessions contained within the interior and the fresh interior scheme itself are laden with messages. His car is marque “x” which says “y” about him. He reckons it says “y” about him, ‘cos the advert and the carsalesman (his great annual friend) implied heavily that it would. It also lets everyone know what his paygrade is. That’s very important. By the badges of their cars they keep their scores in the hierarchies.

All these things are signifiers of ‘him’, but, although he exercised the final and one true freedom of consumer choice, he did not truly choose them – rather they were chosen for him; they chose him.Unheedingly he spins the hamsterwheel on the neverending upgrade cycle.Surely the next upgrade/iteration of his chosen phone/car/gamesconsole/kitchen appliance/laptop/holiday package/tv broadcasting standard/whatever will be the one which will make his life complete! He doesn’t care that the upgrade cycle has effectively rendered the ownership of his possessions merely short term leases towards planned obsolescence – that’s OK! The subscription model embraces and guides him towards a future on the upgrade path, the roadmap to forever, the added functionality, the software/hardware nexus. Mobile phone teleco business models lead the way to the free provision of hardware in return for a monthly subscription fee. The more he pays, the quicker he get upgraded to newer more functional flashier hardware which he displays visibly to the chagrin of his inferiors in the lounge bar/restaurant/leisure & retail destination (all are now one and the same).

Does it trouble him that, seen from the other end of the telescope, he is in fact the product which has been manufactured conditioned moulded and finalised by his compliant vacuous consumption of advertising media (the adverts are sometimes better than the programmes!). The living room was the factory – the product being manufactured was him. He has been told what to want, told when to want it, but never told why. A pre-indebted fully conditioned compliant producer-consumer, he is passed around by the corporations like a party whore; his contract is negotiable. He is the ‘installed base’ which the providers want to ‘upsell’ to. His eyes are the eyes delivered to the advertisers by his media provider. His subscription is the unarguably certain future revenue upon which the media providers base their corporate profitability forecasts as they strategise and organise: the world and its minds being theirs to homogenise.

A pre-indebted fully conditioned compliant producer-consumer, he is passed around by the corporations like a party whore

So does it trouble him? No, he’s too tired: crushed by the unhuman commute, enriching far-off faceless investors by his toils. That is when he’s not going through the motions with displacement activity and clock-watching till 5 o’clock and the tea-time pint (or two or three) which he’s convinced himself that he deserves; digging ever deeper into the easy-credit overdraft of ersatz happiness and good cheer from the bank of Boozy Britain. Then an exhausted evening slumped in front of the plasma, ready-meal in one hand, continental lager in the other; conditioned by advertising-funded broadcasting to be a good consumer – a commercial commodity, bought, sold and delivered gift-wrapped to the corporations; endentured, bonded, enslaved by the upgrade cycle. Then the same again tomorrow. Is this man free? No, indeed he is not. “Prosperity without freedom is just another form of poverty”.

But the exterior of his house screams of a “traditional” and pre-consumerism era. It is a hyperreal simulacrum. Aha! Hyperreality can be thought of as a sort of reality by proxy – where the real world or experience has been replaced by a simulation at surface level only: a “real fake” which is “even better than the real thing”. Indeed, the condition of hyperreality which now permeates Aberdeen and Aberdonians is indicated by this confusion between surface and substance. The same condition of hyperreality causes our posited Aberdonian to mistake buying a “lifestyle” for actually living a life. The same confusion is seen over and over throughout Aberdeen, Scotland, the UK and the Anglosphere – we have mistaken affluence for wealth. Some commentators call this affluenza, and we’ve got a bad case of it in Aberdeen.