The Belmont Cinema has held ‘you’ve been trumped’ over for two more weeks due to popular demand writes Voice’s Suzanne Kelly. 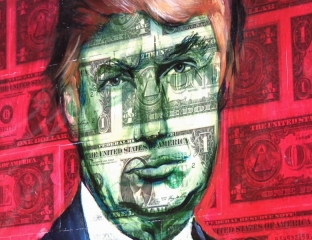 Three more screenings have been scheduled over the coming weekend to cater for the sustained public interest in the film.
I attended it again last Sunday; Director Anthony Baxter was present and held another Q&A session after the film.  This session overran with many people staying behind in the bar to discuss the issues with him.

Long-term Menie resident Susan Munro was also present, and answered several questions.  Since filming, Ms Munro’s garden and car have been affected by a huge mound of sand which the construction engineers left very close to her property.

This will be the second consecutive weekend that the Belmont Picturehouse has added screenings of ‘You’ve Been Trumped’ to their schedule since it’s City premiere on June 17. Such has been the demand.

“We do screen quite a few documentaries, but interest for this film has been overwhelming.  We are very happy to have been able to add more screenings.”

In the current issue of Aberdeen Voice, you can read my review of Anthony Baxter’s award winning film.
See: youve-been-trumped-suzanne-kelly-reviews/

Since writing this review, major newspapers The Guardian and The Daily Mail have expressed interest in the Trump development.  They report Donald Trump has expressed concerns that ‘the world has changed’ since he bought land at Menie and has asked ‘where’s the market?’

The additional screenings will be held

Additional information on the film can be found here:
www.youvebeentrumped.com
http://www.facebook.com/pages/Youve-Been-Trumped/187472834621346

Documentaries on the whole can be, well boring to tell the truth.  They have to tell you what’s going on and why, and/or teach you something.  They are factual and more often than not dry.  Voice’s Suzanne Kelly watched  ‘you’ve been trumped’ which in the simplest terms tells the story of Donald Trump’s building of  ‘the world’s greatest golf course’ at the Menie Estate in Aberdeenshire.

If you thought this meant a few stubborn local people were being unreasonable, then this film will grab you by the shoulders and shake you.  If you thought what was going on at Menie was undemocratic and environmentally dubious, you will be shocked at  how very, very much worse things are than you had ever imagined.  (I had tried to keep up with developments; this documentary has opened my eyes).

Baxter opens and closes his film with cuts from the classic cult film set in Pennan, ‘Local Hero.’ His re-enactment of the phone box scene is already being hailed as iconic (I shan’t spoil it for you – go see it).

If ‘Local Hero’ had been written today, you would think it was paying homage to what’s going on at Menie.  In the cult classic ‘Local Hero’, a lone man refuses to leave his Scottish coastal property and is thus halting big business from ruining the environment with a destructive, massive building plan.

Sadly, the Menie saga will not get the happy ending ‘Local Hero’ gave us.  The dunes are wrecked, the landscape forever altered by a flotilla of bulldozers.

Of particular concern to ecologists and scientists was the fate of the moveable sand dune system –  the last one in Scotland if you are interested – which is no more.  Trump has, as he put it ‘stabilised’ it.  This unique ecosystem, once a ‘Site of Specific Interest’ (SSI) is now a giant, barren sandbox filled with diggers.

Trees were filmed as they were torn from the earth and buried – several hundred of them it seemed.  Baxter interviews a scientist, who lets us know in no uncertain terms that this is an environmental disaster (a SSI is the highest level of protection a site can be given.  The Government decided it was not as important as ‘jobs creation’).  The scenes of coastal countryside bliss early in the film are followed by earthmoving equipment destroying the ecosystems – you don’t need a degree in environmental studies to see how terrible a thing this is, you just need eyes.

The film also uses some beautiful animation sequences of animal life superimposed over the pristine landscape that used to be the home of the Menie families.  There are very poignant scenes involving many of the residents, but particularly moving are scenes of life-long resident Molly Forbes tending her garden and chickens. 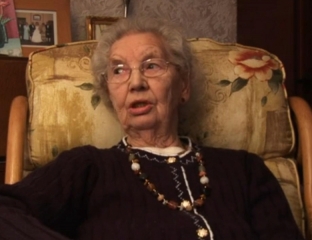 She is also pivotal in Baxter’s incorporating old movie footage (pre WWII if I am not mistaken) of the area.  There are scenes of the agricultural and fishing heritage which is being swept away by both by ‘progress’ and Trump’s pursuit of what he calls ‘the world’s greatest golf course’.

Those residents being filmed retain their outward self-possession, but Baxter captures the frustration, sadness and fear which Trump brought to them with his construction tactics.

Over the months of filming you feel the anxiety and tension build.  An art event is held which adds optimism and shows local resistance.  However, the threat of compulsory purchase orders (where the Government could claim their land and force them out) lingered for a long and clearly took its toll on the residents.  So did having to go without water for over a week (a construction-related deprivation), losing a power line (snapped by a Trump earthmover), and ever-present private Trump security.

The viewer is amazed this relatively small number of residents handle it as well as they do.  The photographic documentation of these events is incontrovertible and extremely moving.  The Trump organisation derides Baxter as a ‘fraud’ and ‘failure’.

I never before found myself shouting and making comments during a documentary, but I was far from alone in doing so; the theatre echoed with shouts and indignant cries.  Baxter has grabbed his audience, and they wait for the next development eagerly and angrily.  He is not being sensationalist:  he is documenting and we are reacting.

A word on Mr Donald Trump is called for.  If Baxter’s film had been fiction, it would have been universally criticised for inventing (what is in my opinion) such an extremely pompous, deceitful, greedy, sexist megalomaniac villain.

When we first see Trump, nearly the first thing he does is try to hire some beauty competition winner (Miss Glasgow or some such thing) who had been invited to his press launch.

“She’s beautiful…. very nice…  Maybe she wants a job in marketing or something.” The Donald seems to direct at one of his staff.

Exactly how this gigantic housing development, resort and golf club got planning permission is a mystery only a few people can explain – and they are not talking.

Mr Salmond, our SNP Scottish leader, was by all accounts meeting Mr Trump for dinner and such.  Before anyone knew what had happened, the Scottish Parliament did what had never been done before:  it called the rejected application in, and gave it the green light.  Salmond is shown explaining how the ‘economic benefits’ and ‘job creation’ promised exceeded the value of our environment.  A subsequent interview with a London School of Economics seems to be the only critique performed on Trump’s figures.  Suffice it to say that the LSE expert had more than a few doubts.

Baxter uses these experts to illustrate the issues and gives us the sequence of events.  There are interviews with  the key players – including a reluctant Trump who is confronted by Baxter at the RGU press conference.  Trump was rattled.  Robert Gordon University awarded ‘The Donald’ an honorary Doctorate.  One of the most powerful scenes in the documentary is when Dr Kennedy, the first principal of RGU, returns his degree.

In a passionate speech Kennedy declares:

“Don’t trample your neighbours; don’t destroy the environment…Somebody’s got to stand up to this….”

When you see this documentary, you will see what kinds of pressures were and still are exerted on the residents and the documentary makers for standing up.  Perhaps the scene most fraught with tension is when Baxter has little control over the filming – as he is being arrested in an outrageous fashion by Grampian Police, virtually attacked, cuffed and thrown in a police car.

Whatever warranted this physical mistreatment?  There is no trace of cause in the events leading to the arrests.  Four hours later he and Phinney are released; their film is held for one week by the authorities.  Welcome to 21st Century Scotland.  We are ‘open for business’.

Coda:  Donald Trump arrived in Aberdeen last week on his partially gold-plated jet; he wants Alex Salmond and/or Sean Connery to open his resort.  On 7 July ‘you’ve been trumped’ will show in New York City:  I await audience and press reaction eagerly.

Watch this space; watch this film.

In contrast to the local established press’s slavering over the crazy golf antics at Menie, Andrew Baxter’s film You’ve Been Trumped, premiered at The Belmont Cinema last Friday, gets behind the hype to expose the darker side of the saga. This is Sean Ashley‘s view. 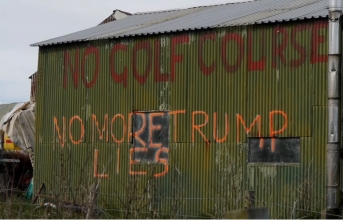 Last Friday evening I was very lucky in being able to attend the Scottish premiere of You’ve Been Trumped.

Tickets had sold out very quickly and although the Belmont Cinema had laid on an extra screening the following day, I wanted to be there for the premiere.

It was indeed exciting.

The film, produced by Richard Phinney and directed by Anthony Baxter, tells the story of unprecedented environmental destruction and the effect on families by the development of Donald Trump’s golf resort at Menie.

In NE Scotland, the reality of what has been happening has often failed to be published by the local press and I wanted to see with my own eyes a truthful description of events.

The film began with a look at the family history of Molly Forbes, her son Michael and their close connection to the land and sea in this part of Scotland. This, if I were to be asked, was my favourite part of the film as it reminded me of Scotland’s heritage and identity which could easily be forgotten if it were not for old sepia pictures and film stills, and, more importantly, memories of folk like Molly.

Further on in the film I witnessed the bullying and intimidation experienced by the families living in their own homes, but surrounded by Trump’s estate. The level of contempt held by the Trump Organisation towards their peaceful living neighbours was astonishing.

Whilst watching, I felt angry and upset at the injustice the Forbes, Milne and Munro families experienced. Care and support for them from the authorities was blatantly non-existent.

I was also touched by the dignity of the residents and the suffering they have endured, often  unreported, but am very glad their voices have been allowed to be heard through this documentary.

I hope You’ve Been Trumped will be seen by many, many people. 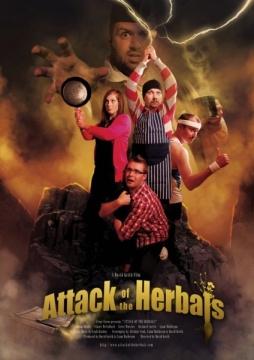 Attack Of The Herbals is a low-budget and independently-produced horror comedy film – think Shaun of the Dead meets Evil Dead – set in NE Scotland, shooting primarily in Newtonhill and Johnshaven.