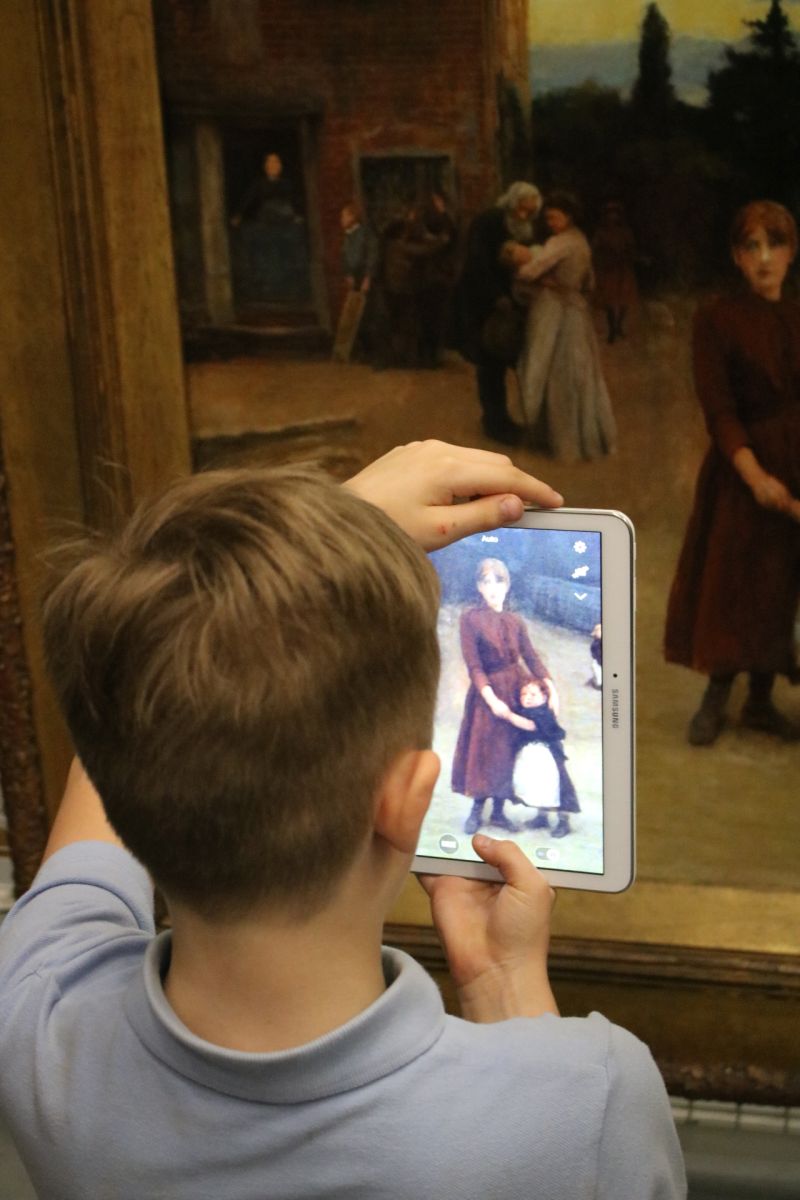 Nuart Aberdeen has finally arrived. A first for the city, sees a collection of street artists, organised by Aberdeen Inspired gather to paint, talk and show films etc over the Easter

Old and rarely used doors on the streets within the city centre, mainly around the Merchant Quarter, are being painted in different styles by different artists.

Among the artists participating in this current international project is Julien de Casabianca, a French/Corsican artist.

His Outgoing project features images of paintings in art galleries, often taken by members of the public on their phones, the main subject from said painting isolated via photoshop, then printed onto paper.

This paper is then pasted on buildings, walls etc in public spaces.

To this end various primary schools were invited to send a group of children to Aberdeen Museum Treasure Hub in Northfield, a building which stores many of the works of art that have been relocated from the Art Gallery during the refurbishment that is currently ongoing.

I was in invited by Aberdeen Inspired and NuArt to catalogue this process, working with Manor Park, Riverbank and Walker Road schools.

On arrival, the children were told what the general purpose of their visit would entail, before being split into two or three groups. I would stick with one of the groups each time. This took place on three Thursdays in March.

In the first part of their session, the children would be in an almost classroom like situation where they were given practically free rein to express themselves art wise.

They had a large wall mounted monitor complete with a white screen where they could copy images from the Art Gallery’s digital representation of the art works in it’s collection, or just draw whatever they wished; there were props and dressing up clothes so they could utilise and get their friends to take photos of themselves, or take selfies, with their iPads.

Also, there were word searches and sheets of A4 paper which had a pre-printed frame on, so they could draw whatever took their fancy. It was interesting to watch and see how they reacted and the choice they made. Some would throw themselves wholeheartedly into it, others just sat quietly and concentrated on drawing.

After about 45 minutes, the group I was with were taken through into the first of two storage rooms, with their iPads, to view and photograph the paintings, or rather, parts of paintings, be it a figure, an animal or something like a tree.

the youngsters had ever seen such paintings, and they were quite amazed

This room contained paintings of various sizes and from various eras, stored in racks which slid out when pulled. These works of art were paintings done on either canvas or or other fabrics, but not paper.

Some of the works they weren’t able to capture because they are still under copyright, or were covered in protective tape and plastic, but many others were available.

This was the first time that many of  and interested in them. I had to explain to them that they should concentrate on just part of a painting, and not fill their screen with the whole thing, some of which, as you can imagine were rather large.

After that they were led into a smaller room where paintings and drawings done on paper, were stored in drawers. Some of these drawers were already pulled out and at just the right height for the children to stand over, making sure that their device covers were either removed or held securely up, and snap until their hearts’ content.

The net result is that selected photographs the children have taken will be chosen to be the ones used by Julian to paste up in the East Green – an area other artists will be utilising, and where the official opening ceremony on Saturday 15th April will take place.

This part of he city already has several doors from the Painted Doors project already in situ. So it is the perfect location for the hub of the event.

Saying that, there will be several events taking place in the few days leading up to that. See the NuArt website for details.

All in all it was a pleasure to be involved with the schoolchildren.

The Treasure Hub is available for group and organisation tours. It is well worth visiting. So, this coming week get out and about in the city centre and see this unique event. 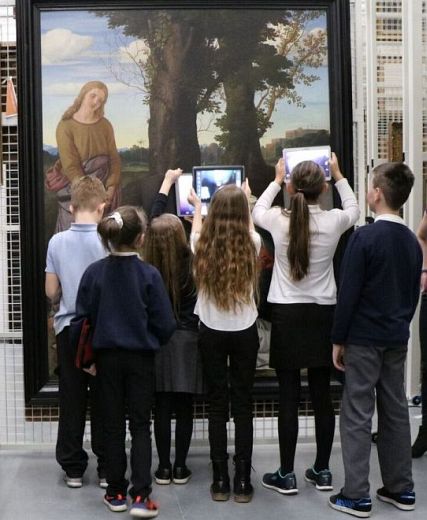 Youngsters from Aberdeen schools have delved into the city’s prestigious art collection to get inspiration for their special involvement in Nuart Aberdeen.
Pupils from Manor Park, Woodside, Riverbank, Seaton and Walker Road primary schools got the opportunity to explore a wide range of art at the Treasure Hub in Northfield, currently being kept in safe storage while the Aberdeen Art Gallery undergoes its multi-million pound redevelopment.

The sessions were held as part of The Outings Project, a participatory public art project founded by the globally renowned artist Julian de Casabianca.

The artist, who is participating in the inaugural Nuart Aberdeen festival, will work with the youngsters to paste their selected characters at specific sites in Aberdeen city centre.

Pupils had the opportunity to examine a number of paintings from the Aberdeen Art Gallery and Museums Collections, from Portrait of a Lady (The Artist’s Wife) by William Dyce to La Perla de Triana by John Phillip, among others, choosing and photographing their favourite characters to share with the Aberdeen public.

They will then enlarge and paste them up in the city centre under the guidance of Julian, as well as in their own schools and neighbourhoods – getting the change to turn the streets into temporary art galleries during the festival, which is taking place from Friday April 14 to Sunday April 16.

The artworks that the children accessed for this project aren’t currently on display, giving the public a wonderful opportunity to enjoy them in a new way.

It is hoped that the project will help children feel involved in the festival, especially as their efforts will also be displayed in their local areas, as well as encourage new audiences to engage with the Aberdeen Art Gallery and Museums collection.

There are a number of fun ways for youngsters and families to get involved in Nuart Aberdeen including street printing and chalk drawing workshops, walking tours and an Easter Sunday Street Art hunt.

Nuart Aberdeen will officially open on Saturday April 15, when Herakut’s monumental mural on the façade of Aberdeen Market will be unveiled before the guided Street Art tours begin.

Also on Saturday, the street printing workshop with Berlin-based collective Raubdruckerin will teach participants how to transform old clothes with street inspired graphic designs from the area in and around Castlegate.

The Chalk Don’t Chalk workshop, being held on St Nicholas Centre’s Rooftop Garden on Sunday April 16, gives children of all ages the “freedom of the city” to create their own chalk street art pieces, with professional artists on hand to teach and guide children on their designs.

“It was wonderful to see the children enjoying the sessions at The Treasure Hub and getting so involved. Nuart Aberdeen is a legacy project for us and we are really looking forward to seeing their paste-ups in the city centre and their local communities.

“This particular project was the brainchild of Julian de Casabianca and it was intended for local children to feel ownership of these images. It is also hoped that they will bring their families to enjoy the Art Gallery when it re-opens in 2018/19 because it will feel, quite rightly, as if they are artists, in the same way as those displayed in our local art space are.

“We would like to extend our thanks to Aberdeen City Council for supporting school staff during these project, as well as community staff who will help with the next stage, and of course, the Aberdeen Art Gallery staff who facilitated the sessions at the Treasure Hub.

“There will be a range of fun events that youngsters and their families can take advantage of during Nuart Aberdeen and I would urge everyone to check out the programme and enjoy what is on offer.”

“We are absolutely delighted that our schools and pupils are participating so enthusiastically in the latest festival offering in Aberdeen’s cultural calendar. We have placed a huge emphasis on culture and education and to bring the two together at the Treasure Hub and for the children to work with a globally renowned artist is absolutely fantastic.”