In collaboration with New Moves International, Peacock Visual Arts and Citymoves Dance Agency present ‘This Is Performance Art’ (TIPA), a four-day festival featuring some of the most exciting and influential performance artists in the world. 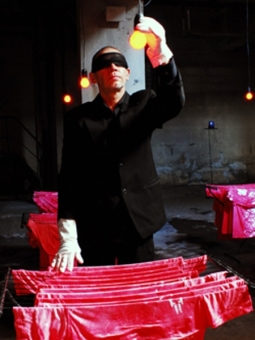 The festival includes performances, installations and a workshop, as well as an opportunity to meet the artists on their arrival into Aberdeen at a discussion chaired by Lindsay Gordon, Director of Peacock Visual Arts

ALICIA BRUCE // Menie: a portrait of a North-East coastal community in conflict
Award winning photographer Alicia Bruce spent the summer of 2010 collaborating with residents of the Menie estate, an area of outstanding natural beauty and a Site of Special Scientific Interest (SSSI) situated 20 minutes north of Aberdeen. The residents’ homes are under threat of compulsory purchase as Trump International starts construction of a golf course, hotel and housing development with plans to re-name Menie ‘The Great Dunes of Scotland’.
The exhibition showcases a stunning array of photographic and moving image works that present a humane story about people and place – an observance of conflicted territory and those who inhabit it.

ANITA JEAN STEWART // Mounthooly in May
Last May Mounthooly roundabout has a change of identity. Artist Anita-Jean Stewart, along with her trusty mobile studio, took up residency on Aberdeen’s renowned traffic island bringing with her; shadow-shows, tea-parties, poetry, glitter-balls, gigs, hula-hoops and artist’s talks. Stewart successfully transformed the roundabout into a creative bubble for the month of May, the results of which can be seen at Peacock Visual Arts in January. So if you missed out last spring – there’s another chance to relive the excitement of Mounthooly in May.

TASTE BUDS // Jay Koh + Chu Yuan
Sweet, sour, bitter, salty, pungent…what does each taste evoke for you? Artists Jay Koh and Chu Yuan invite you to join them in this public participation art project to discover the multi-dimensions of tastes. They will be at Pad Thai café in the Aberdeen Market every Tuesday and Thursday afternoon, from 8 February – 3 March, to discuss the diversity of different tastes.This project is part of a Cultural Diversity Fellowship by Peacock Visual Arts with support from Creative Scotland.

Screenprinting Weekend Workshop with Ailsa McWilliam
Explore the possibilities of this colourful, graphic and immediate approach to making repeat prints. No experience is necessary – just a few images and a bit of creativity.

Etching Weekend Workshop with Michael Waight
Learn the techniques and processes that are involved in the traditional art of etching. No experience necessary.

Photo Etching Weekend Workshop with Michael Waight
Ideal for those with some etching skills. It will show you how to work with transparencies, photographic or hand drawn, and to work in more direct and playful ways with the plates you make. 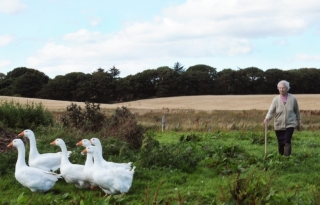 Alicia Bruce spent the summer of 2010 collaborating with residents of the Menie estate, an area of outstanding natural beauty and a Site of Special Scientific Interest (SSSI) situated twenty minutes north of Aberdeen.

The resident’s family homes are currently under threat of compulsory purchase as Trump International starts construction of a golf course, hotel, and private housing development with plans to re-name Menie ‘The Great Dunes of Scotland’.

Through socially engaging and interacting with the residents of the estate, Bruce has produced a stunning body of photographic and moving image works that present a humane story about people and place – an observance of conflicted territory and those who inhabit it.

A number of the works within the exhibition are staged photographs referencing artworks from Aberdeen Art Gallery’s permanent collection. With the Menie estate in the background and the residents as the subjects these respond to the subjects and create not only a reference to the original artworks, but a portrayal of the subjects in the photographs and the ordeal they are currently facing.

Bruce, an Edinburgh Napier University 2006 PFI Graduate, was previously awarded an Artist in Residence at Aberdeen Arts Centre in 2008 where she spent her time creating new work responding to the city of Aberdeen as well as teaching a series of community based workshops.

Her photograph Flood in the Highlands after Sir Edwin Landseer, has gained international recognition winning several awards and bursaries.  This image has been exhibited at the City Art Centre, Edinburgh, Aberdeen Art Gallery and Rhubarb-Rhubarb International Review. Made possible with the financial assistance of the Aberdeen Visual Arts Award, Bruce now returns to the Northeast to exhibit in the city’s centre for contemporary art – Peacock Visual Arts.

With support from Street Level Photoworks, Glasgow, Bruce predominantly works in photography and moving image. She describes her work as a collaborative process with the subjects she  photographs, with the photographic portrait being a key aspect of her work.

“This exhibition is a humane story of a conflicted territory and those who inhabit it” says Alicia.

“I was deeply upset to see the harassment the residents of Menie undertook simply for wishing to remain in their family homes. If these compulsory purchase orders go ahead no home in Scotland would be safe.

“Menie is a stunning piece of coastline and, in spite of living in constant threat the residents welcomed me with hospitality and above all dignity.

“We short listed paintings we saw in Aberdeen Art Gallery and restaged these as large-scale photographs outside the resident’s homes with them as the subjects.  We drew parallels with the artworks and the current situation in Menie. The image in the show of 86 year old Molly Forbes was her tenth day without running water.”

“Peacock’s exhibitions often highlight very relevant topics and with this exhibition Alicia has managed to capture the stunning landscape of the Menie Estate whilst sympathetically telling the story of the residents who live there. At a time where the future of the area is such a pertinent topic we feel bringing the issues of the development to the attention of our audience to be very important. The exhibition can be appreciated by all, from those interested in the current situation to those who just want to view the captivating works that Alicia has produced.”

“This exhibition shows us the real residents of Menie, around our homes and in the environment we love and cherish and now have to fight for the basic right of staying in.”

Running in conjunction with  ‘Menie: a portrait of a North-East coastal community in conflict’, is an exhibition displaying the results of an off-site project carried out on the city’s renowned traffic island, Mounthooly Roundabout.

Last May artist Anita Jean Stewart changed the identity of the roundabout by taking up residency, along with her trusty mobile studio, and bringing with her; shadow-shows, tea-parties, poetry, glitter-balls, gigs, hula-hoops and artist’s talks.

Stewart successfully transformed the roundabout into a creative bubble for the month of May, the results of which can be seen at Peacock Visual Arts from January 14th. So if you missed out last spring – there is another chance to re-live the excitement of Mounthooly in May.

‘Menie: a portrait of a Northeast coastal community in conflict’ and ‘Mounthooly in May’ both launch on Friday 14th January, all welcome.