Aberdeen Voice’s Fred Wilkinson and Suzanne Kelly spend a night at the Theatre; Krakatoa erupted (glad to get that bad pun out of the way) with possibly its most high voltage show and hyper audience ever. Photographed beautifully by Dod Morrison. 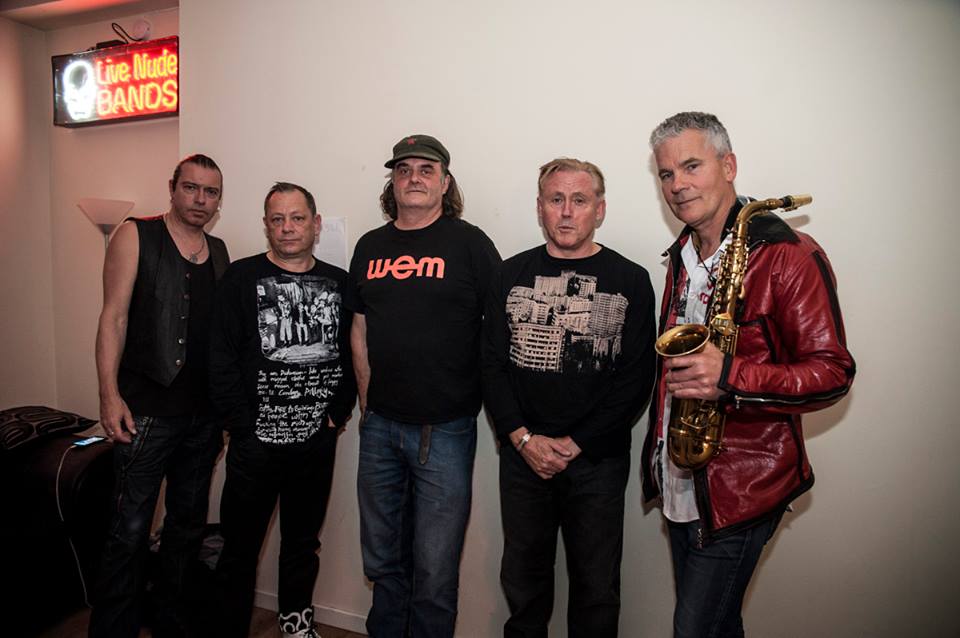 Feel sorry for yourself if you didn’t get into Theatre of Hate’s sold-out show if you love music, because it was one of those nights that will go down as legendary in Aberdeen’s live music history.
Theatre of Hate returned to The Granite City after a 30-something year absence touring new album, Kinshi, and we all went mad for it.

Theatre of Hate is Kirk Brandon (lead vocals, guitar, otherworldly stage moves); Adrian Portas (guitars; tonight, looming on a platform over the others on stage); Stan Stammers (bass guitarist whose playing flows like fine wine); John Lennard (saxophone – the most expressive you’d hope to hear) and percussionist Chris Bellcafe giving it his all.

The band formed in the early 80s, eventually morphing into Spear of Destiny.  In 2014 they appeared for the first time in decades with a new EP of four diverse and powerful tracks which eventually led to…

Kinshi is Japanese for prohibited. The album artwork shows samurai warriors whose world and way of life was soon to be outlawed.  While the samurai ways passed into legend, their warrior tradition persists – read into that what you will. The four songs from the EP included ‘Venice’ – a haunting/haunted ballroom love/break-up waltz.

The pre-apocalypse, politically volatile ‘Day of the Dog’s’ lyrics ask questions of East and West in terms of dogma and suffering:

“Breaking point / The Gateway to the West / Unhinged, broken / Flood makes the journey / Meanwhile warmongers / 7th century / Thirst for blood / All in the name of” (with ‘God’ being the unspoken name I conclude). 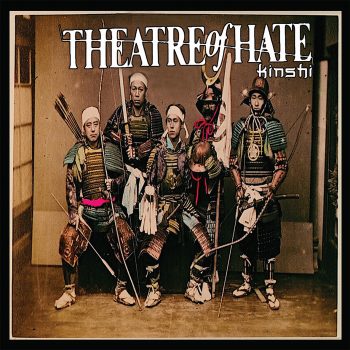 It makes me question our volatile world situation (God – if you’re reading feel free to weigh in).

It also makes me wonder why, when there is so much that needs to be said today, mainstream music shies away from reality and goes with safe, bankable lyrics and anodyne acts, or pointlessly salacious and pointlessly high-budget tracks (‘Bitch better have my money’ – thank you Rihanna). But I digress.

My favourite song from the EP and the album is ‘Slave’ – hypnotic rhythm leads to a great crescendo of guitar/bass/drum/sax with Brandon’s vocals riding the curl of this rich wave of sound.

Theatre of Hate have this amazing sax and guitar layering over bass/drum no outfit I know can approach.  The song  is a surprisingly accurate insight into the pressures on women to conform to the media’s Barbie-doll beauty ideal – physically impossible of course. ToH’s ‘Slave’ offers further keen observations on the thoughts an ageing starlet or model might have; am astonished by these insights into women’s issues.

“She woke this morning / put on slave paint / living the life of glamour / the Hollywood land ideal… Self love and pity from a bottle / the media play the woman game.”

Then Brandon’s lyrics widen out to perhaps the moral of the song (well, for me anyway), as he invokes the famous Rubaiyat of  Omar Kayyam:

“The moving finger writes; and, having writ, moves on: nor all thy piety nor wit shall lure it back to cancel half a line, nor all thy tears wash out a word of it.”

“No one can stop the clock that ticks / Or halt the calendar page / Fear itself, has made her slave / She’s the fashion, of her age – SLAVE.”

Ten points for including a beautifully illustrated booklet with lyrics with this album, and another ten points for Theatre of Hate for showing such understanding of the pressures the media and society put on women, particularly physically beautiful women to remain beautiful while time makes the feat impossible – it makes some of them slaves to vanity.  ‘Slave’ is hypnotic; the way it builds is gorgeous – the album version is beautifully worked – and I can’t stop listening to it.

Back to the rest of the album. ‘Mr Mendacity’ is illustrated with an image of everyone’s least-favourite POTUS candidate, Mr Drumpf.

This timely piece of protest music is going down very well with anti-Trump factions (I wish it were on Youtube or somewhere I could share it more – hint hint) and reminds us what a good protest song can and should do.

“He’s got an ego, the size of his house / He’s got the money and he’s got a mouth / Flannels everyone he’s talking so loud / Suitably self impressed, working his muppet crowd” – and there in a few lines is a summary of a man no one should be taken in by.

There is a dub version of the album as well; I can’t wait to hear it. The project was crowdfunded, and contributors chose from a range of rewards and enjoyed periodic updates and tracks. Too late to be a crowd funder, but it’s not too late to order Kinshi, and from the look of how they were flying off the merchandise stall last night, looks like some of you are way ahead of me on the point. 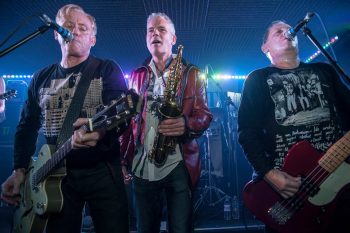 There is a faithful core of people in Aberdeen who follow Spear of Destiny and Theatre of Hate; this first appearance in Aberdeen (last was apparently 30 years ago in Fusion) was highly anticipated, and there was an energy and enthusiasm in the crowded bar that night before the show started.
‘Black Irony’ was the first song of this set which balanced old and iconic ToH pieces perfectly.

The set was long and must have been gruelling, not least for Brandon whose operatic range and preternatural ability to sustain notes is well known – but it also all seemed to end far too soon. Twenty songs – or was it twenty-two? – filled the venue, and the crowd were ecstatic.

‘Black Irony’ is a dark, sinister indictment of western values :

“I believe in Micky Mouse, Snow White and the 7 dwarves / Snowden & Assange / I believe in Dr Strange”

Brandon menacingly intones; the sax is sultry, more than a bit sordid. Splendid work, and the crowd is responding to the new material, with many people already aware of the lyrics.

Towards the start of the set are ‘Americanos’ and ‘The Hop’ – clearly favourite songs of many people here. After ‘Ukraine Girl’ from the new album with its 1960s feel beat, things are calmed down with another haunting number this time classic ‘Love is as Ghost’. Loss, love, suicide, and pain in the lyrics are beautifully matched by the music, and the sax is mournful. Sticking to the dark side of romance is the classic (but angrier) Incinerator. The audience is very much there with them.

‘Conquistador’ then brings the set to ‘Mr Mendacity’ – and for a while I’m lost from my attempts to make notes on the night to just enjoying it. Floating along one moment, jolted then by ‘Legion’ and the chanting crowd, I’m enjoying the ride; we all are. Someone’s said to me at the end of ‘Legion’,

“That was a life-changing experience.”

The next thing I know Kirk’s getting everyone to sing ‘Original Sin’ with him. The fever pitch in Krakatoa is like no other night I’ve spent there and everyone’s shouting ‘Do you Believe in the Westworld’ at the top of their lungs before the final encore, ‘Propaganda’. 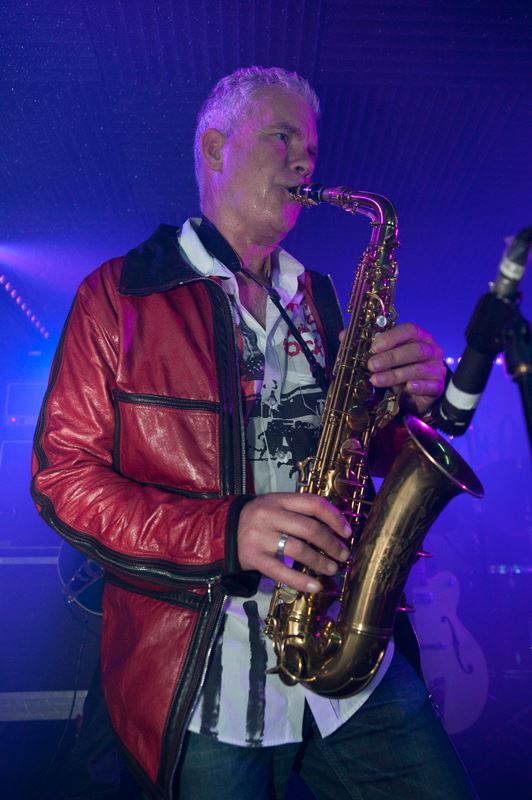 This night would not have hit the heights without Adrian Portas’ talents and Farrant’s percussion. Watching and hearing Portas is a pleasure; wish I could have seen more of Farrant behind the crowd and the guitars – but we all felt and heard his work (must be exhausting mentally as well as physically).

Verdict – virtuoso (yeah an overused word) performances from all, with every member of ToH having moments when they particularly shone as individuals, and a night of wholly original music performed with conviction and spirit of a kind we rarely enjoy. There was one passage where Stan Stammers was remarkable, but as my notes were eventually covered in beer, I can’t quite tell you which bit I’d been particularly struck by.

During one moment of Zeppelin’s film ‘The Song Remains The Same’ Plant is backstage at Madison Square Garden and comes out with an odd statement:

“This is a song that sometimes takes a building in a manner which our forefathers were very used to. Did you hear that? It’s right though, isn’t it? That feeling that’s left everybody, the cosmic energy! Everybody goes yeah! Bash!”

I never knew what he was on about until this show.

Don’t take my word for it:

“They’ve disposed of traditional structures – chorus, middle 8. When you get it, you get it. I can’t predict what they’re going to do next. What an excellent night.” – Fred Wilkinson (Toxik Ephex, Aberdeen Voice editor, said while clutching his copy of Kinshi. Fred also wanted to mention how spot on he found the sound engineer’s work tonight)

“It was triumphant return to Aberdeen for TOH after 34 years and good to see the Aberdeen people come out and support a local venue that is keeping music alive” – Dod Morrison, photographer

On A personal note:

I wish I’d made it to more of these dates; it’s a genuine regret as I’ve read such glowing reports about the shows. Fred Wilkinson wasn’t going to stay at first (he was there for a meeting earlier in the evening, but he was persuaded, and wound up very happy he remained, although when I pointed out the Trump artwork in the Kinshi lyrics, he had a funny turn.

Admission – I was a miserable, useless failed bass student; no matter how hard I practiced scales and lines, whatever I played sounded mechanical and stilted. So it was absolute thrill listening to Stan Stammers make such fluid, melodious, emotive music.

Another admission – I usually don’t like saxophone in rock such as Springsteen – Clements was a huge talent I admit – but there was always something so wholesome, American, clean-cut about most sax in rock that it just left me cold. Lennard’s playing is as far removed from the kind of sax I find cloying as is possible to get, and I loved it.  Lastly I hope Hen is recovering well, and Craig Adams – thanks for yet another great night.

Let’s not leave it so long next time please. Encore.