Voice’s Suzanne Kelly explores the functions of wild meadows in Britain, looks at some of the existing meadows in Aberdeen and what the authorities have planned for those areas. 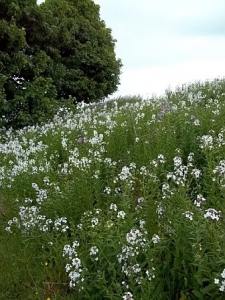 ‘We must have a tree for every citizen” is the battle cry of Aileen Malone, a ranger or two (who also think we will make money from the trees), one or two people who are involved with the forestry industry and some political pundits.

They are willing to kill the Tullos Hill Roe deer, discard our bronze age (and later) archaeology, displace birds and insects, remove gorse and wildflowers from Tullos Hill, and spray weed-killer for 2-3 years.

Never mind that they have previously failed.

Forget that Mother Nature has left this windswept, exposed hill as a grassy meadow:  these experts will try a second time with our tax money to impose a new biosystem over the biosystem which exists on Tullos.

They consulted experts, so Valerie Watts, Peter Leonard and Aileen Malone keep insisting, and no other experts’ opinions (however valid, whether freely offered or not) are wanted.  This refusal to entertain other advice or to compromise whatsoever calls into question their claim to scientific superiority.  Additional flaws and omissions from initial submissions leak out constantly, but the tree and cull proponents will not budge.  Not willingly anyway.

But what other options are there for Tullos Hill and for Aberdeen?

There is a new breed of expert and new school of thought, backed by virtually every environmental agency in the UK and by Europe.  This wave of expert opinion says that our meadows and grasslands are absolutely vital. 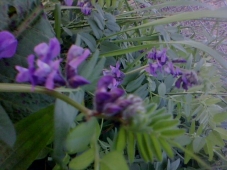 So before we allow politicians and career-builders decide the fate of Tullos Hill, its flora, fauna and archaeology, let’s just for a moment or two entertain a different vision for Tullos:  a meadow and deer park, enhanced with more wildflowers and plants, and with protection from arsonists increased.

It is not impossible; it certainly would not be as expensive as imposing 89,000 trees.

By the way, the deer cull is not enough.  Weed killers – we don’t know what kind or how toxic – are recommended by one arm of experts for two to three years.  Cost:  unknown.  Toxicity:  unknown.  Effectiveness:  unknown.

Who are these people claiming meadows and grasslands are not only desirable but definitely essential?

Since the 1930s, we have lost 98% (over three million hectares) of wildflower meadows across England and Wales

Plantlife (www.plantlife.org.uk ) is the UK’s leading charity working to protect wild plants and their habitats.

They identify and conserve sites of exceptional importance, rescue wild plants from the brink of extinction, and ensure that common plants do not become rare in the wild.

Here is what they have to say on the importance of meadows and grasslands – like Tullos Hill:

“These are arguably the UK’s most threatened habitats. They are rich in wildlife, landscape character, folklore and archaeology, and they offer a range of ‘services’ to society and the environment. Despite this, our wildflower meadows have suffered catastrophic declines over the past century and intense pressures continue to threaten those that remain.

“Despite some good work being carried out to restore wildflower meadows, the trend continues to be an overall decline in extent and condition of these habitats. The Countryside Survey 2000 showed a decrease of a further 280,000 hectares of wildflower meadows in the UK between 1990 and 1998. The survey also showed a continuing decline in the species diversity of these habitats.

“Once lost, our species-rich meadows and grasslands cannot easily be restored.

Susan Kerry Bedell, Funding Manager for Saving Our Magnificent Meadows, has corresponded with me about the need for protecting our remaining meadow lands.  She has sent me a summary document which can be found at

[http://www.plantlife.org.uk/campaigns/saving_our_magnificent_meadows/ (NB The summary will be put up in the next couple of weeks).  The summary paper stems from a three-year project funded by Natural England, Countryside Council for Wales, Scottish Natural Heritage, Northern Ireland Environment Agency and Plantlife.  Some of its key messages are:-

Despite their high nature conservation value, our wildflower-rich grasslands are in decline, both in extent and in quality. Many of our meadows in the UK were lost during the last century. 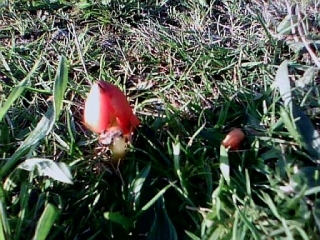 Intense pressure, particularly from changes in farming practices, as well as development and neglect, continue to impact on the remaining areas. Between 1930s and 1980s, 98% (three million hectares) of wildflower-rich grasslands in England and Wales were lost.

Once lost, these species-rich meadows cannot easily be recreated.

What can you do to help reverse this decline in meadowlands and grasslands?

Forests are wonderful.  And so are Meadows.  We need both, and not just one or the other.

Finally, I am launching a petition to keep Tullos Hill the wildlife-supporting meadow it is, stop the tree planting scheme, and to stop any cull.  If you would like to sign, or get a copy of the petition to collect signatures on, please contact me via Aberdeen Voice ( Link ) 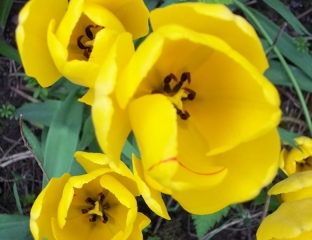 Spring has sprung and the weather’s glorious:  it’s garden time.  Some of us will take strimmer, mower and other power tools to our gardens until there isn’t a weed in sight. But before you chop down that tree or cut all of your long grass, here’s something to consider.  Aberdeen City and shire are losing green space at an unbelievable rate; new housing developments are planned for virtually every patch of open land.

We will have to wave goodbye to the meadows near Loirston Loch, and Union Terrace Gardens are a stone’s throw from being filled in with god-knows-what kind of shopping mall/parking area ( ‘it’s only full of grass’ says Councillor John Stewart ).  A massive bypass will cut through pristine shire at some future point and nine hundred homes will be built by future president Trump on what was once a wildlife paradise.

If habitat loss weren’t enough of a problem, climate change is most definitely driving many species into areas they have not previously inhabited.

Where will wildlife go when the habitats go?  It’s a wonder we still have any wildlife at all. Consequently, please consider making part of your garden a wildlife haven.

The long grass you are about to strim is likely providing food and shelter for insects including some of our rarer butterflies and moths. The tree you might prune or cut down is cleaning your air, housing birds, and feeding a host of creatures you might not have considered. If you don’t have to turn your grass into a concrete patio ( sorry, I meant ‘vibrant space’ not concrete patio ), you are again helping the birds by giving them area to look for worms. Bird lovers might want to keep a bird feeder going all year round ( which is current RSPB advice ) and having a small bird bath and a source of drinking water.

My back garden is probably an eyesore in the eyes of my much neater neighbours. There are large sections of dense herbs growing as well as dandelions and plenty of long grass. On the whole, it’s totally none-suburban. On the other hand, it supports a fairly large bee population (there are a few varieties), many kinds of birds, a few butterflies and moths, and one year even a toad took refuge under a tree. 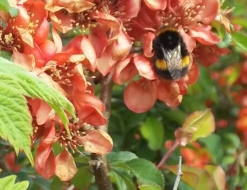 I don’t clear dead leaves and debris away at the first sign of warm weather as there are as likely as not insects and eggs dependent on this temporary mess.

There are many spaces for all kinds of creatures to live, breed and hibernate in a garden like mine and it doesn’t cost all that much in terms of time and money.  In return I get fresh herbs, fruits, amazing flowers – and the knowledge that I’m playing some small part in helping wildlife.

Even if you don’t have much time to devote to gardening ( I definitely don’t ), it’s not hard to grow a few herbs and flowers which will help our dwindling bee, moth and butterfly populations.  There are nurseries such as Poyntzfield on the Black Isle ( http://www.poyntzfieldherbs.co.uk/ ) which can help.  They provide plants which are increasingly rare in the wild, plants native to Scotland and exotics from around the world. Poyntzfield’s outdoor plants are particularly hardy with many of them specifically cultivated to manage in our cold winters.

When buying plants and seeds, you might also want to consider that the EU have just virtually banned herbal remedies  – this could be a good time to start your own backyard collection of traditional medicinal plants such as Echinacea, St John’s Wort, Valerian and so on. Again, Poyntzfield is a great resource for medicinal plants.

The news has been filled with stories about the declining bee population worldwide.

If you can believe it, there are ‘bee rustlers’ stealing bee colonies from bee keepers in parts of Asia; thankfully this is not a problem we have just yet in the Deen. The bees in my garden seem to gravitate towards sage blossoms, quince flowers, roses, lilac and a variety of herbs and heathers. It is best to have flowers supplying nectar for as much of the year as possible. 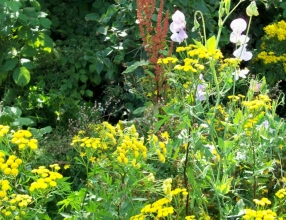 A good nursery or website will tell you what plants flower when, and will be happy to help pick plants for your particular garden.

Small bee habitats can be bought inexpensively or made from hollow reeds bound together (think of those godawful Pan’s pipes that fake South American bands play).

When plants are no longer flowering but bees are still around, leaving sugary water in shallow dishes makes a nectar substitute.

Butterflies thrive on nettles, so if you have a corner where the nettles won’t bother you too much, you’d be helping the butterfly population by growing some (you might even like to try making some nettle soup).  If nettles are a bit too extreme for you, then you might consider buddleia.  Poyntzfield recommend hyssops, mints, rosemary, thymes, lavender and basil for bees and butterflies.

Edible fruiting plants will benefit wildlife as well as you and your family – strawberries, blaeberries, raspberries (which need attention and isolation so that they don’t take over) can with little effort provide you with fresh fruit for most of the summer and early autumn.  When you serve a meal containing herbs you’ve grown or fruits you’ve grown there’s a certain amount of satisfaction to be found.

As well as Poyntzfield, you might want to visit the Organic Growers’ Alliance website at http://www.organicgrowersalliance.co.uk/links There are seeds for sale, courses, and information for all kinds of gardeners from the new to the experienced.

Whatever you choose to do in your garden, please think about attracting wildlife – they need all the help they can get.