The uncertain fate of the ancient elms in Union Terrace Gardens is highlighted by Mike Shepherd. 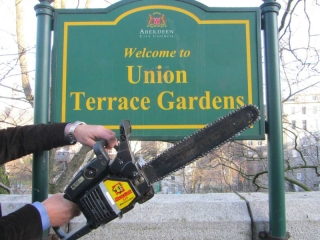 There are 77 mature trees in Union Terrace Gardens and a few more along the adjacent railway line. It is not clear how many of these will be felled during the construction of the proposed City Garden; however most will probably go. An Evening Express article suggested that they will all be removed, whilst it was mentioned at the January council meeting that some of the trees in the north-west corner may be kept.

Rather bizarrely, the same Evening Express article mentions that the wood from the Union Terrace Gardens trees could be recycled for the construction of the City Garden, that is for paths and the wooden roof of the outdoor stage, “keeping them in the garden”.

It is proposed that the new trees in the City Garden will comprise a “mini-forest” of 186 trees, mostly Scots Pines.

The fate of the twelve elms in the park is a highly controversial issue. A handful of these trees are considered by the council to be at least 200 years old. They may be even older. A report gives mention to the planting by the Town Council in 1764 of a thick woodland on the hillside to the west of the Denburn.

The trees in the park are disease-free. Occasional comments made by certain ill-informed councillors that Dutch Elm Disease is present in the Gardens are not true. The trees are inspected from time to time. The symptoms of the disease show up in the summer when leaves turn yellow and fall off early. This has not been seen in any of the Union Terrace Gardens elms.

As far as mature trees in the city are concerned, the council can do what it wants.

The disease, a fungus carried by bark beetles, has devastated elm trees throughout most of the UK. It is estimated that more than 25 million elms have been killed by the disease with very few mature trees left.

The disease spread to the north of Scotland only in the last twenty years and pockets of relatively disease-free elms have survived here. Aberdeen city is one such pocket. The disease has been recorded in only a few trees in the west end of the city, but it is generally absent.

Elsewhere in the north-east, Dutch Elm Disease has recently been killing large swathes of elms. Most, if not all, of the elm trees on Drum Castle Estate have succumbed, for example. It is to be hoped that the city stays relatively clear of the disease for as long as possible.

Aberdeen is said to have “possibly the largest remaining population of elms in Northern Europe that has not yet succumbed to the deadly Dutch Elm Disease.”
http://frontpage.woodland-trust.org.uk/ancient-tree-forum/atfgallery/galleryphotographers/geoffbanks/images/geoffproject.pdf

The mature trees in Union Terrace Gardens have been assigned Tree Preservation Orders by the Council. A document is available online which explains the policy towards protected trees in Aberdeen. The following are quotes from the document:

“A tree preservation order (TPO) is an order made by us, giving legal protection to trees or woodland. A TPO prevents cutting down, uprooting, topping, lopping, wilful damage or destruction of trees (including cutting roots) without the council’s permission.

“The purpose of a TPO is to protect trees that contribute to amenity and the character and attractiveness of a locality. Other factors such as heritage and wildlife value can be taken into account. A TPO gives the council an opportunity to assess the impact of work to trees or proposals which may affect them.” However, it goes on:

“The existence of a TPO can not in itself prevent the development of land taking place, but the council, as planning authority, has a duty to have regard to the preservation and planting of trees and the likely effect of development proposals on trees is a material consideration.”
http://www.aberdeencity.gov.uk/nmsruntime/saveasdialog.asp?lID=25378&sID=13464 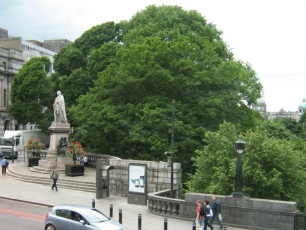 In other words, as far as mature trees in the city are concerned, the council can do what it wants. A tree preservation order on the Union Terrace Gardens elms does not necessarily protect them.

The result of the referendum on the Gardens in March will also decide the fate of the elms. For some in the city, it is a major issue. They see the removal of the trees in Union Terrace Gardens as a crime against nature. These are amongst the last surviving mature elms in the country, Europe even.

For many it would be a sad day if and when they are chopped down. There is an online petition to save the 200-year old elms:
http://www.petitiononline.co.uk/signatures/save-the-200-year-old-elms-in-union-terrace-gardens-aberdeen/4168 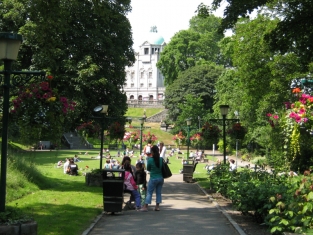 Where’s the money coming from?

Money’s Too Tight To Mention is the title of a 1980’s Valentine Brothers pop song covered by Simply Red.

It is also thematic of the City Garden Project (CGP), the controversial proposal to develop Union Terrace Gardens.

The nominal costs for the project are £140m, of which it has been proposed that the private sector provides £70m and Aberdeen City Council borrows £70m through a tax scheme to fund the rest.

A commonly-asked question over the last three years has been, “Who pays for any cost over-run if the project runs out of money?” It is a question that has never been properly addressed and it now looks as if the answer is: “there is no obvious source of money should the costs exceed £140m”.

At a public meeting at Cults Academy in May 2010, it was stated that the Council would pay any excess costs. A month later, Sue Bruce, the then chief executive, decreed at a council meeting that the Council would most certainly not pay for any cost over-run and put the responsibility on to the private sector. This has been the understanding ever since.

At this stage, there are no identified funds should costs ramp up.

However, the private sector has managed to raise no more than £55m of promised funding for the CGP to date. Assurances have been made to the Council that £70m will be on the table and this sum’s availability is one of the conditions for the CGP progressing to the planning stage.

At last week’s council meeting, the question of potential cost over-run was put to Colin Crosbie of the Aberdeen City Garden Trust, the organisation created to take the CGP through to the construction phase. Colin mentioned that the project costs will be less than the nominal £145m and that this gives a built-in margin. The intention is also to put rigorous project and cost management in place.

There could be a problem in finding funds above the projected £70m private sector input. It appears that local businesses are concerned about public goodwill should they be seen to contribute money for the controversial project.

At this stage, there are no identified funds should costs ramp up. One obvious solution is that Sir Ian Wood could make a guarantee to handle this, but there is no sign of this happening as yet.

Could costs over-run on the City Garden Project?

One group of professionals have expressed severe misgivings about the potential for cost over-run on the City Garden Project. Architects.

Scottish architects met at a convention in 2010, and in a straw poll, almost unanimously rejecting the Aberdeen proposal, stated that:

Neil Baxter, secretary of the RIAS, the professional body for Scottish architects, has also said:

“A further significant concern is the much-publicised budget for this proposal. You will be well aware that the highest profile architectural competition in Scotland in recent years was that for the Scottish Parliament and the lengthy and difficult process which ensued from the risible budget initially set for that endeavour. Considering that, in recent years, buildings of comparable scale in Aberdeen and elsewhere in Scotland on straightforward urban sites have cost easily twice the quoted budget figure for this particularly problematic and challenging site we would be very concerned about launching a competition based upon such a questionable budget.”
– See: http://fraserdenholm.blogspot.com/2010_05_01_archive.html

I talked to one architect who had concerns about the allocated budget for the scheme. He told me that the project has “cost over-run written all over it”. There are two tricky areas:

The latter concern possibly derives from a previous situation in the south of England, where a tunnel built to support a new Tesco store above a railway line collapsed. This caused a five-year delay to the original project.
– See: http://en.wikipedia.org/wiki/Gerrards_Cross_Tunnel

What would happen if costs massively over-run?

As mentioned, there are no obvious sources of funds identified to handle any cost over-run above £140m. Aberdeen City Council certainly can’t afford it and the private sector is cash-limited at present. Should it occur, the most likely situation is, to save costs, not everything would be built. Failing that, the project would come to a halt if there is no money left to proceed.

In this instance, there could be a half-built steel and concrete shell where Union Terrace Gardens used to be, clearly the worst case scenario. This would also have the unfortunate effect of causing the tax scheme, underpinning the council’s borrowing, to collapse. This is based on the CGP creating new businesses in the city to provide rates to pay off the £70m loan.

Without a completed project, the Council will be left to service a massive loan. This would be a disaster on a horrendous scale.

The ever-present potential for massive cost over-run on the CGP is a major concern and without a clear plan and identified funds to handle excessive costs, the project is far too risky to consider.

Aberdeen City Council could be sleep-walking to disaster if the scheme gets approved.