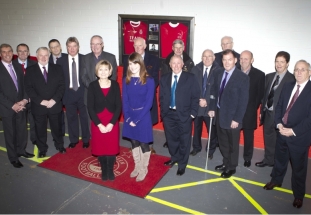 Mere words are difficult to fashion into any sort of coherence to describe the gratitude those of us of a certain age feel for Eddie Turnbull, who roared into sleepy, plodding Pittodrie in 1965 and gave Aberdeen fans their pride back.

I had the pleasure of meeting him fourteen years ago, and the afternoon I spent with him in the Barnton Thistle Hotel I still regard as three of the best hours of my life.

He was 74 then, frail after a lung operation and tiny in frame. Not so in personality, neither in enthusiasm and passion for the game which was his obsession. Twenty six years after he’d left Pittodrie having just failed to win the league title with the Dons, he still retained great affection for the club and his recollections when probed by me on trainspotterly specifics of the 1967 USA tour were as clear as the water with which he would later dilute the bottle of 12 year old Glenlivet gifted him as a token of my gratitude and respect.

From 1965 to 1971, this “wee mannie frae Falkirk” as he described himself, revolutionised Aberdeen FC.

That is not too strong a verb. His first result, beating Rangers 2-0, endeared him to the fans. His new-broom coaching methods and legendary fierce discipline earned him the respect of the players and his iron will even had the club’s directors wondering if they’d perhaps have preferred a yes man in charge, for he wasn’t that.

Having endured the perils and hardships of serving in the North Atlantic merchant fleet running cargo to Murmansk during the Second World War in the face of fascist bombs and torpedoes, a few local businessmen in suits and trilbies were hardly going to frighten Eddie Turnbull.

None ever refers to him as “Eddie”. He was, and is “Boss”. That’s respect, but it’s also affection.

The 1970 Scottish Cup win was his most tangible achievement and the following season’s thrilling title chase was proof that the squad he had patiently assembled was equal to Celtic’s which had reached the European Cup final the season before.

Many of us of that vintage, who marvelled at the coolness of Martin Buchan, the energy of Davie Robb, the sniper-like predatory accuracy of Joe Harper and the guile of Steve Murray remain convinced that had the manager not returned to his beloved Hibs, the title would have been won in 1971-72 and sustained success would have been ours a decade before Fergie took us to previously-unimaginable heights.

The Hibs team he built in the early 1970s played beautiful football and it is surprising that 1972’s League Cup was their only trophy success. A major regret, he told me, was that Hibs did not beat Aberdeen to European success a decade before Gothenburg, succumbing tamely on reaching the quarter final of the European Cup-Winners Cup.

“They didn’t want it enough”, was his opinion.

He left Hibs in 1980 and was lost to club football – a huge oversight given the state that it’s now in and considering the foresight he might have brought to it. Yet, he said that the greatest pleasure he derived from football was seeing young men make their way in the world, helping them develop their innate talent and seeing them and their families thrive and prosper.

Although he was a hard man, this was an indication of the standards that he set and which he bred into those who shared his fitba vision and passion.  I still have regular contact with some of his Pittodrie players. None ever refers to him as “Eddie”. He was, and is “Boss”. That’s respect, but it’s also affection.

Not only have the Dons and Hibs lost a legend – that’s a TRUE legend, look up its definition – the football world at large has lost an innovator, a tactical genius and above all, a passionate advocate for all that was good and artistic in the game.

I thought he would live forever and I suppose for those of us with memories of his Aberdeen teams from 1965-71, he will.