Suzanne Kelly got involved in coastal ecology issues when she moved to Aberdeen. She was a community councillor who was on the East Grampian Coastal Partnership, and undertook several campaigns to protect green belt land, animals and she campaigned against the Trump golf course. After recent news stories from around the world, Suzanne talked to some animal experts about the growing problem of people taking selfies with wildlife including Lee Watson of Ythan Seal Watch who supplied the photos and John Robins of Animal Concern Advice Line and Save Our Seals Fund. 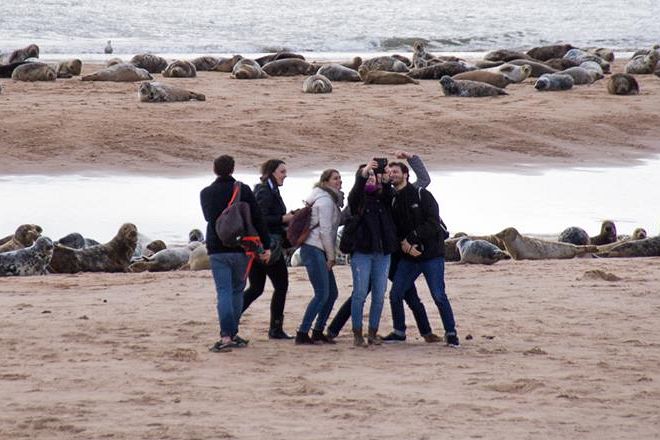 Scotland’s wildlife is suffering because of loss of habitat, pollution, dwindling food supplies and poaching in Scotland.
In Aberdeen evidence of poaching was found on Tullos Hill in the summer of 2014. The city has some of Scotland’ most polluted streets.
In Torry, protected species are going to lose shelter, food and water as Nigg Bay becomes industrialised.

In the shire seal populations are supposed to be protected by signs, fences, and warning flags in the sand, but these deterrents are being ignored.

Seals need to ‘haul out’ or rest on the sands for many hours before they take to sea for food again. People are legally bound to leave them alone, yet these seals are bombarded by overhead drones, dogs off leashes, and people finding it amusing to frighten the resting seals back into the water to take videos. This behaviour is prohibited, the signs are clear, and yet people persist.

John Robins of the charities Animal Concern Advice Line and Save Our Seals Fund said:

“People stupid enough to take selfies with wild animals probably don’t care if their idiocy ends in the death of the animal. They are not concerned that their actions cause stress and suffering to animals and the abandonment of young animals by their parents.

“Perhaps they will be more concerned to learn that disturbing animals can lead to the selfie taker ending up in a police cell, a hospital bed or on a slab at the local mortuary. Unless you have a special licence, it is illegal to take photographs of many protected species of animal and bird. Get caught doing that and you will be carted off to the police station.

“Seals, even cute and cuddly pups, have a nasty bite which carries a high risk of very dangerous infections which can lead to long term debility and even death. Many other animals and birds carry zoonosis, diseases including salmonella, e-coli and even rabies which can infect humans. My advice is to use your brain before your camera.”

Animals can be exhausted and in need of rest, frightened, injured, and must be left alone at a large distance. When visiting wildlife habitats, remember to find out the rules in advance, obey any signs, and listen to any directions you are given by any rangers or wildlife officials. Our wildlife is having a hard time – don’t make it harder.

Lee Watson of Ythan Seal Watch has been raising awareness and challenging illegal behaviour for several seasons now. A group of volunteers formed the Ythan Seal Watch and try to safeguard seals and nesting birds. Their Facebook page reads:

“The Ythan Seal haul-out is now designated and the Seals are legally protected from harassment. We will work with the relevant wildlife and law enforcement agencies in support of this and we will continue to film and monitor the Seal haul-out and any irresponsible behaviour.”

If you are aware of any wildlife crime in the UK – illegal hunting, poaching, snaring – anything – please don’t let it go without calling 999 if it is happening now, or 101 for anything else. 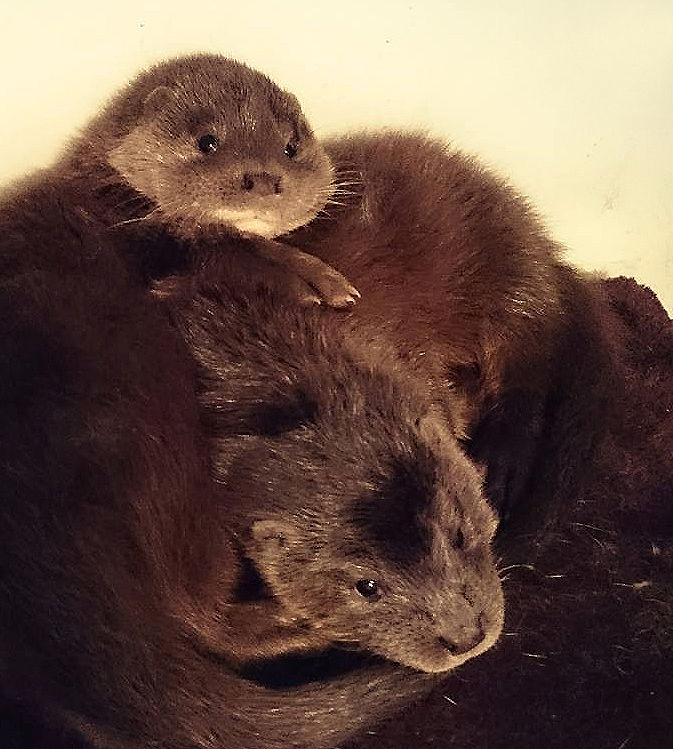 Several concerned members of the public have reported visitors to wildlife areas such as the Ythan Estuary are paying no respect to the wildlife. People are ignoring signs and other visitors – and pestering the seals. It may seem cute or fun to go up close to seals – but they need to be left alone. One such walker has shared these pictures and their observations. Via Suzanne Kelly. 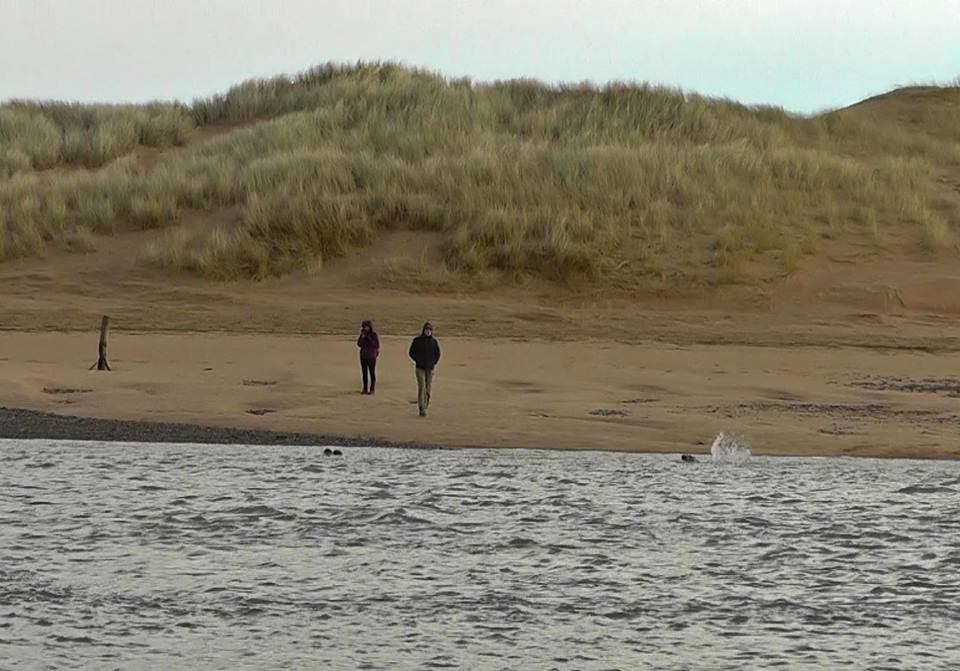 If you visit a wildlife area, please remember that the animals you see are not there for your entertainment.

Our wildlife is to be left alone, with the exception of the discovery of a wounded or obviously distressed creature. Anyone needing assistance or advice can call the Scottish SPCA on 03000 999 999.

Walkers have been observed scaring the seals at the Ythan. They ignored advice and pleas to back away from the animals.

When seals leave the water, they are often seeking rest after exhausting efforts to feed. Here are some photos of what not to do. If you recognise anyone in these photos, please let them know that they need to give animals a wide berth. 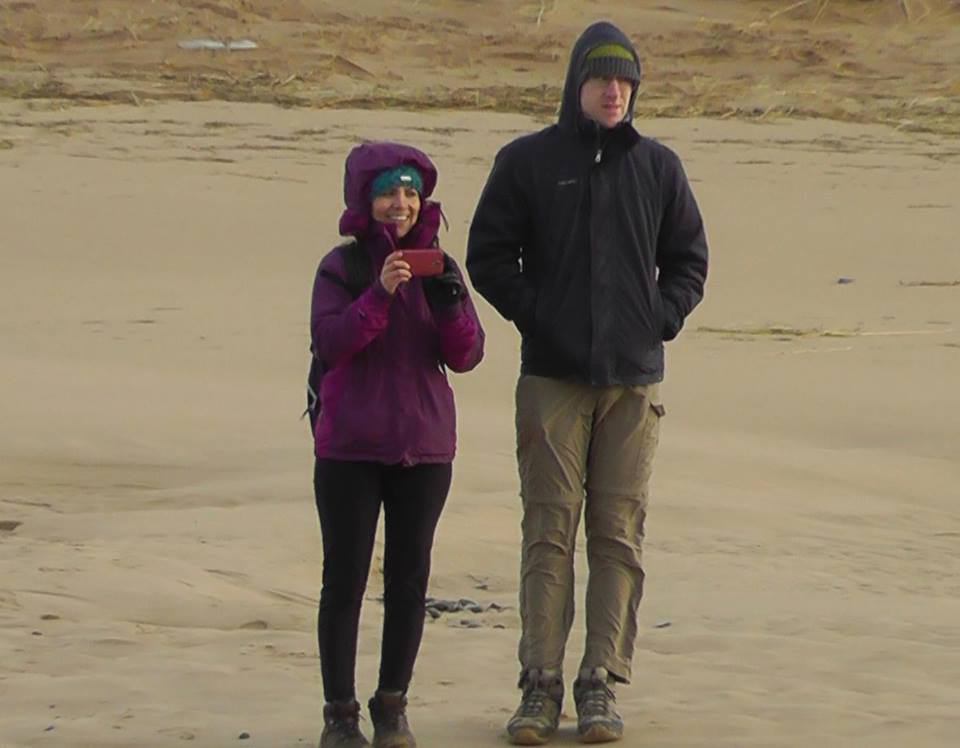 “Couple No.1 decided to approach the seals today.

“We shouted to them to back off from the seals after they had scared the first group into the water.

“They did and stood around for a bit before deciding to ignore us and walk past the larger group of seals. 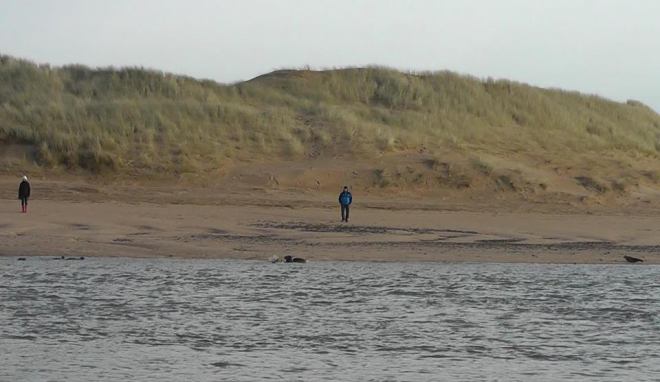 “Couple No. 2 proceeded past Couple No.1 and stood around near the seals that were waiting for them to leave so they could haul out again.

“One young seal was still out the water on its own not far from them.

“They then walked towards the main area of seals. 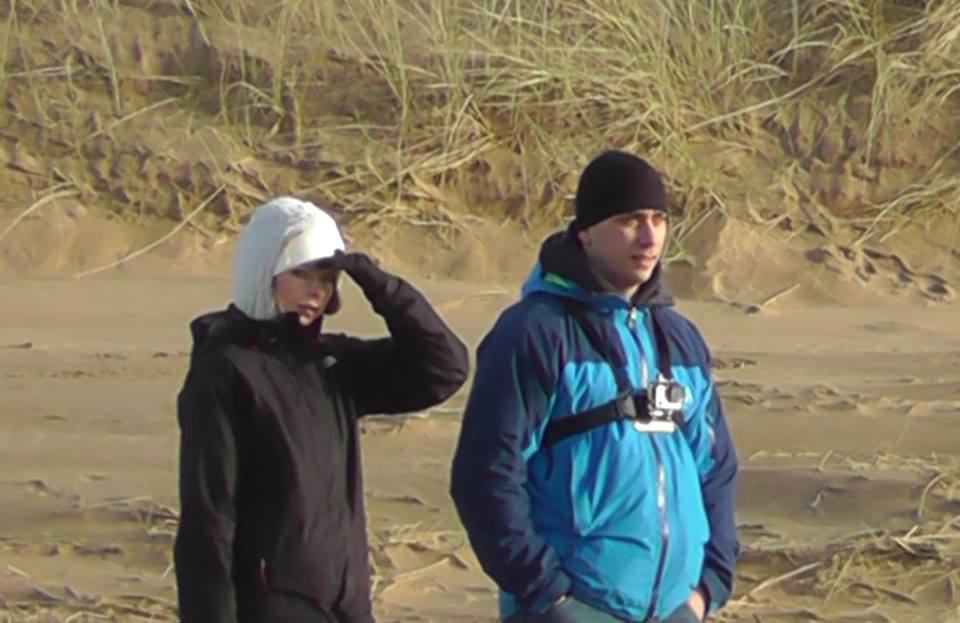 “Again we had to shout over to them to keep away from the seals before they backed off.

“Last picture is a couple walking their dog on the other side.

Thankfully the dog was on a lead and they did give the seals a wide berth, but still a little close for comfort for us watching. 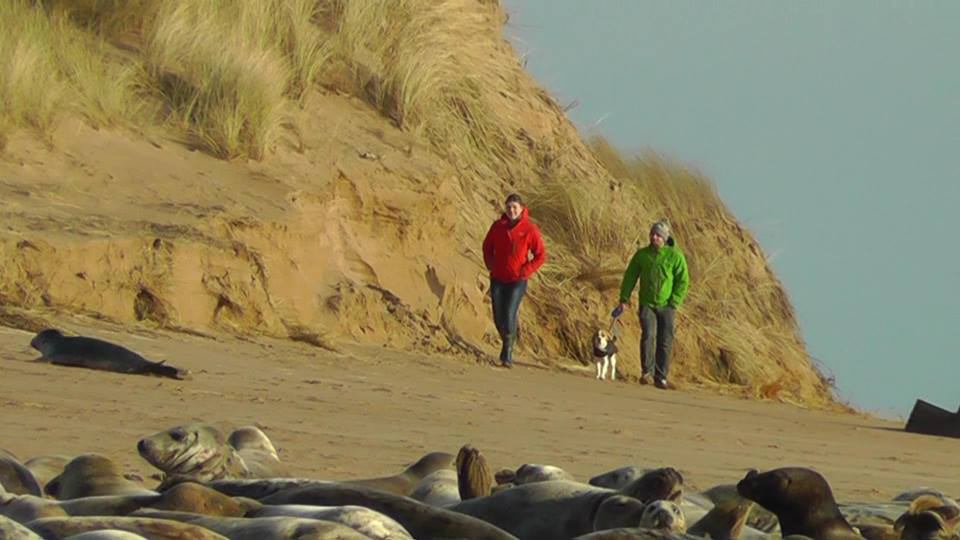 “As we were leaving we could see more people making their way along the beach towards the seals. Clearly something needs done to protect the seals from people.

“These people obviously did not mean any harm to the seals, but were too oblivious to realise what they were doing. But what about people who might find it funny to chase or scare the seals?” 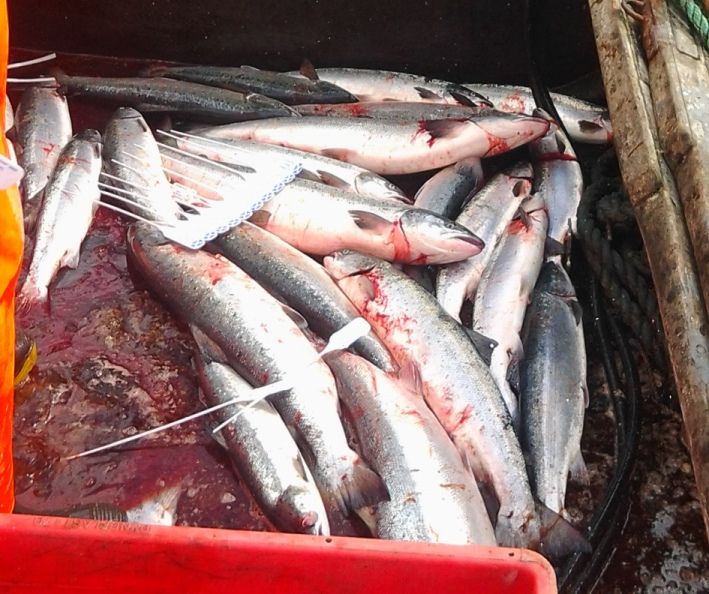 The Salmon and Trout Association (Scotland) (S&TA(S)), in conjunction with leading angling guide and consultant Ian Gordon, has today launched an online petition aimed at preventing any killing of wild salmon in Scotland before 1st July for the next five years. This follows two years of poor salmon runs and reflects an increasing appreciation that decisive action is required to help arrest the decline.

The public petition, which is hosted on the Scottish Parliament’s website, also calls for an end to all coastal salmon netting, given that it is totally indiscriminate and incapable of distinguishing between river stocks which are healthy and those that are severely depleted. The cessation of coastal netting would enable the Scottish Government to honour its international conservation obligations, particularly under the NASCO treaty.

“It is evident that the Scottish rod catch of salmon in 2014 was the lowest in over 60 years and just 50% of the ten year average. Decisive action is now needed to reduce significantly the number killed, particularly the most vulnerable stocks – those that arrive back on our coasts between January and June. Our proposals are for a five year period from 2016 in order to give any recovery in salmon numbers the best possible chance of success”.

“Whilst we welcome Scottish Government’s recent announcement that it will consult imminently on the introduction from 2016 of a ban on the killing of wild salmon except under licence in order to ensure that ‘any killing of salmon is sustainable’, we are adamant that this should be underwritten by a firm presumption that no licences whatsoever should be issued for any exploitation before July”.

Ian Gordon, an authority on salmon fishing in Scotland, commented:

“A year ago I promoted my own online petition, calling for Scottish Ministers to stop the resumption of net fishing in the early spring after a 14 year voluntary cessation. This attracted over 20,000 signatures and I am pleased to note that Scottish Government has now introduced a conservation measure from the 2015 season banning any killing of salmon before 1st April.

“We now need to go much further and I hope that our new petition can build on this momentum so that the Scottish Parliament gives due priority to greater protection to our wild salmon, until such time as stocks of one of Scotland’s most iconic species show a marked recovery”.

The petition can be accessed through –http://www.scottish.parliament.uk/GettingInvolved/Petitions/PE01547

The full text of the petition reads:

“Ian Gordon and the Salmon and Trout Association (Scotland) call upon the Scottish Parliament:

(i) in the interests of salmon conservation, and on a precautionary basis, to request Scottish Ministers to use their powers immediately under the Salmon and Freshwater Fisheries (Consolidation) (Scotland) Act 2003 Act to ensure that no Atlantic salmon are killed in Scotland for a period of five years from 2016 – by either nets or rods – before 1st July; and

(ii) in the case of fishing for salmon by coastal netting, to take such steps as are necessary to bring to an end the exploitation of wild salmon by Mixed Stock Fisheries at any time of year, in line with Scotland’s international commitments and obligations.”