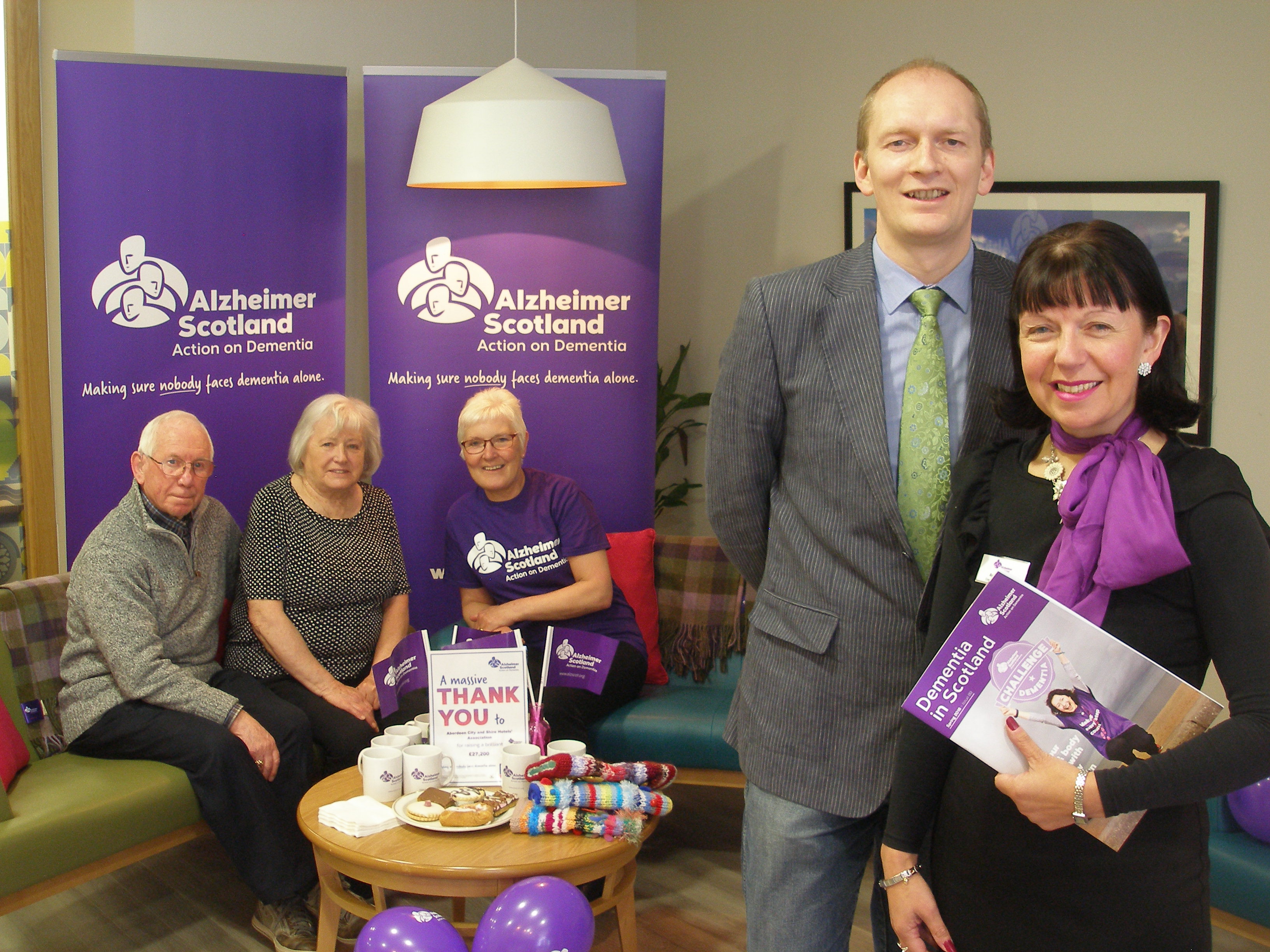 Aberdeen City and Shire Hotels’ Association (ACSHA) has announced that it has broken its fundraising target for one of the country’s leading dementia charities – thanks to a four-figure boost from its recent cycle-a-thon.
Hoteliers today handed over a cheque for over £27,000 to Alzheimer Scotland at the charity’s recently-opened Aberdeen Dementia Resource Centre at the culmination of a year-long fundraising period.

The 3,500km cycle-a-thon, equivalent in length to the Tour De France, took place on static bikes in Aberdeen International Airport and hotels across the region.

Staff, management – and even some guests – from a dozen hotels pedalled their way through 24 gruelling hours to raise over £4,000 for the worthwhile cause.

The mammoth biking effort was just the latest in a series of fundraising initiatives undertaken by ACSHA in the past year – including the launch of a new lager with Deeside Brewery, participation in the city’s annual Memory Walk, and the auction of a bottle of Pol Roger Vintage Cap 1943 champagne.

Mike Edwards, owner of the Mariner Hotel, has spearheaded ACSHA’s fundraising efforts throughout 2015/16. Alzheimer Scotland is a charity close to Mike’s heart, as his father – a well-respected member of the hospitality industry in the north east – was diagnosed with vascular dementia in 2008, aged just 59. In the Aberdeen area alone, there are around 300 people under the age of 65 living with dementia.

“The cycle-a-thon marked the big finish to our year of fundraising for Alzheimer Scotland, and it was fantastic to see so many of my colleagues and peers in the hospitality industry squeezing themselves into their cycling gear and jumping on the bikes.

“We are absolutely thrilled to have exceeded our fundraising goals for Alzheimer Scotland, and this is all thanks to the generosity and determination of hoteliers in Aberdeen and Aberdeenshire.

“I would like to personally thank the members of ACSHA who have worked tirelessly over the past year to raise funds for such a worthwhile charity.

“Dementia affects those in all walks of life, and the new Aberdeen Dementia Resource Centre has quickly become such a valuable haven of support and advice in the city. Each and every penny raised will go towards improving the quality of life of those living with dementia in the north east, and their carers.

“Aberdeen City and Shire Hotels’ Association is proud to support Alzheimer Scotland’s work in the north east of Scotland.”

“With over 90,000 people now living with dementia and the number on the rise, Alzheimer Scotland is passionate that nobody should face dementia alone. It is our mission to challenge dementia once and for all by working with our supporters and partners to increase awareness and raise funds.

“We are incredibly grateful to the support provided by Aberdeen City and Shire Hotels’ Association over the last year. Their hard work has provided a welcome boost to our operations in the north east and will be invested back into the new resource centre which provides a vital source of information and support for those living with the condition.”

The money raised by ACSHA will go towards funding Alzheimer Scotland’s operations in the north east, including the Aberdeen Dementia Resource Centre which was opened last year.

In addition to monetary donations, a number of ACSHA members have also signed up to the Dementia Friends initiative, which aims to make public venues more welcoming to those with dementia and their carers.

Aberdeen City and Shire Hotels’ Association represents 49 independently operated hotels and conference venues, along with a further nine associate members. These hotels provide around 4,500 bedrooms in Aberdeen and Aberdeenshire. ACSHA is committed to improving the quality and standard of hotel services and to furthering the overall standards of excellence and hospitality within the region. 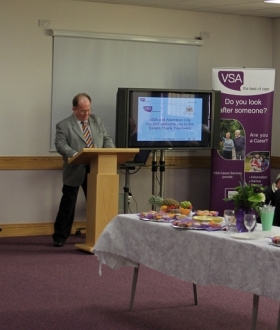 At a lunch on Tuesday hosted in partnership with Aberdeen City Council, speakers  honoured local carers and, coinciding with the Carers’ Week 2013 theme ‘Prepared to Care,’ asked whether local carers really are emotionally and practically prepared to care, particularly in a crisis situation.

“Three in five people will be carers at some point in their lives.  There are a lot of services to support the people being cared for.  But what about supporting the carer when they need it most?

“VSA is absolutely delighted to receive this fund.  It’s open to any carer in the north-east facing difficulty.  We want to reach new carers and help those we’re already working with.  It could be a broken down washing machine and a carer who needs funding for a replacement.  It could fund a laundry service for an unpaid carer who’s too overworked to do it themselves.

“A family may need help covering the cost of a call support system for the house.  Or it could be transport to hospital visits.  Funds are obviously limited and we’ll support those in greatest need.  But each case will be different but our independent panel will be open to ideas.”

Dorothy McBrearty cares for her father who has Alzheimer’s, Prostate cancer and COPD and her mother who suffers from two types of dementia:-

“This new fund would have been really beneficial for me.  As their only carer, it’s difficult when suffering my own health problems too. When I had to go to the doctor, it could clash with their appointments.  Having emergency help to transport them would have been brilliant.”

“Carers in the north-east must take advantage of this.  Being a carer can make you tired and stressed.  You don’t want any added strain on yourself or the person you’re caring for.  Knowing you can call for help in a crisis would be an amazing comfort.”

“This legacy is going to be a huge help in a time of increased crisis and panic.  Carers are faced with more tough decisions that further impact on their busy and often extremely stressful lives.   But having an opportunity to access a Carers’ Crisis Fund would be a massive relief during a desperate time.

“Caring for someone else can seriously impact your health, relationships, finances and career.  It has a real knock-on effect.  It’s not something you want to handle alone.  The right support and advice is essential.  By getting involved in Carers Week 2013, we can highlight and improve conditions for the 25,000 unpaid carers in Aberdeen city and shire.”

Tuesday’s event will include a speech from Len Ironside, convenor of Aberdeen City Council’s Social Care and Wellbeing Committee and a personal perspective on preparing to care from local carer Vic Baxter.  There will also be information stalls with specialist staff on hand for advice, open between 11am and 3pm.

The funding is the Aberdeen and Aberdeenshire share of a legacy from the late Mrs Nadia Moulton-Barrett, left to The Princess Royal Trust for Carers in Scotland (part of Carers Trust).  The VSA Moulton-Barrett Legacy Fund, known as VSA’s Carers’ Crisis Fund, will be a responsive grant programme to fund items or services for carers facing challenges.