Faroese police have threatened tourists visiting the island archipelago with possible arrest and prosecution if they do not report sightings of migrating whales and dolphins to local authorities. With thanks to Michelle Mossfield, Media Director, Sea Shepherd Global 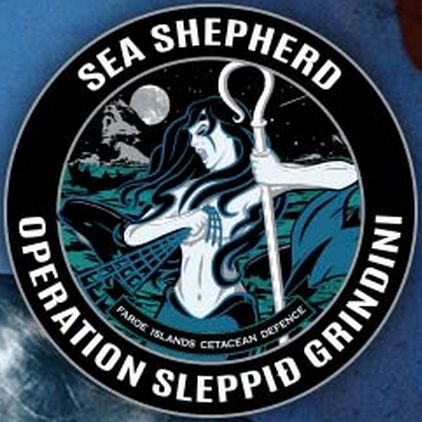 According to ramped-up Faroese law, tourists visiting the islands must report all sightings of whales and dolphins to local authorities, so that the cetaceans can be targeted for slaughter in the infamous drive hunt, known as the grindadráp.

Visitors who do not abide by this law may face arrest and prosecution, with penalties of 25,000 Faroese króna or just over 3,000 euros, and imprisonment of two years.

Operation Sleppid Grindini Co-Leader, Scottish actor Ross McCall, and Land Team Leader, Rosie Kunneke of South Africa, confirmed that they were informed of the penalties in a series of meetings with local authorities in the Faroe Islands.

In those meeting, authorities including the Deputy Chief of Police, Chief Criminal Investigator and the Deputy Chief Prosecutor of the Faroe Islands were quick to emphasize that the law applied to all visiting tourists, not just those believed to be with Sea Shepherd.

“I can only imagine how those opposed to, or unaware of, the grindadráp tradition will react to such a law. Instead of basking in the wonder of seeing these mammals in their natural habitat, you can now face the possibility of being imprisoned if you fail to call the police and alert the locals to your find, leading to them killing those very whales at the local beach.

“I suggest that authorities inform all incoming tourists of the laws and of the punishment for breaking these laws. Soon, I’d imagine, the tourist trade will consist only of travelers who enjoy a hunt,” said McCall.

“The law effectively forces any tourist visiting the Faroes who happens to see migrating pilot whales and dolphins to actively partake in the slaughter of the grindadráp. Even tourists who are on whale watching tours can be involuntarily drawn into the slaughter. While these laws are obviously intended to limit Sea Shepherd’s effectiveness in protecting pilot whales, the severe implications will most certainly drive tourist and their money away from the region.”

Despite these laws and revised penalties, the Danish Navy has confirmed that it will not assist with reporting or other involvement in the grindadráp. Former member of the Royal Dutch and Royal Australian Navies and Captain of the Sea Shepherd fast trimaran, Brigitte Bardot, Wyanda Lublink, has commended the response.

“As a naval officer, you are commanded with the responsibility of defending the innocent and those who can not defend themselves. To do otherwise would be in complete defiance of the indented purpose of your mission. However there does seem to be a contradiction, when the Danish Navy is exempt from mandatory participation in the grind, while other tourists, including other EU nationals, are not,” she commented.

International exposure of the grindadráp has already incurred a negative reaction from some in the tourist industry. Since 2013, two German cruise line companies, AIDA and Hapag-Lloyd, have publically expressed their concerns about the grindadráp to Faroese government, calling for an end to the slaughter.
CEO of Sea Shepherd Global and Operation Sleppid Grindini Leader, Alex Cornelissen, said:

“The last thing you expect when you visit a remote group of islands on a holiday is that you will be forced into the largest slaughter of marine mammals in Europe. It would be like going to Zimbabwe and being forced into rhino poaching, or going on a diving trip and being forced to fin sharks.

“In their enthusiasm to enforce these new penalties, the Faroese authorities seem to have overlooked the potential threat they pose to tourism, the impacts of which are likely to be extremely unpopular.”

For hundreds of years the people of the Danish Faroe Islands have been herding migrating pilot whales from the sea into shallow water and slaughtering them. The grindadráp wipes-out entire family groups of whales and dolphins at one time.

The 2015 killing season started in a horrific manner on Saturday June 6, when 154 pilot whales were slaughtered on Miðvágur beach on the island of Vágar in the northwest of the Faroe Islands. The grind took place prior to the arrival of Sea Shepherd, and was the largest dolphin slaughter in the islands since 2013.
Operation Sleppid Grindini will be Sea Shepherd’s sixth campaign in the Faroe Islands, and is led by the organization’s strongest at-sea presence in the region to date.

Sea Shepherd Global
Established in 1977, Sea Shepherd is an international non-profit, marine wildlife conservation organization. Our mission is to end the destruction of habitat and slaughter of wildlife in the world’s oceans in order to conserve and protect ecosystems and species.

Sea Shepherd uses innovative direct-action tactics to investigate, document, and take action when necessary to expose and confront illegal activities on the high seas. By safeguarding the biodiversity of our delicately-balanced ocean ecosystems, Sea Shepherd works to ensure their survival for future generations. For more information, visit: http://www.seashepherd.org/