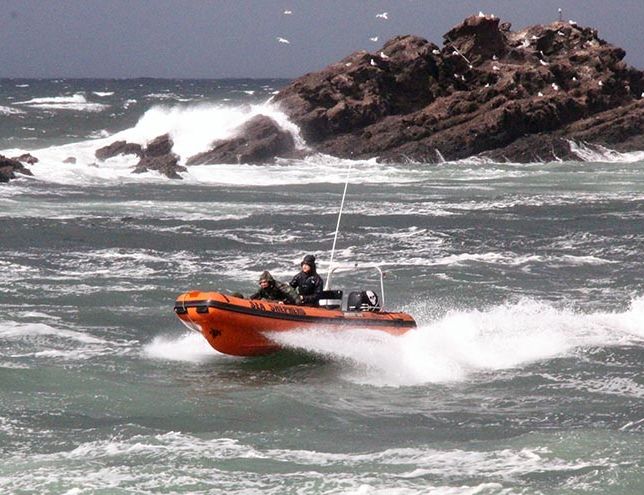 Sea Shepherd Global announces its 2015 Faroe Islands pilot whale defense campaign, Operation Sleppid
Grindini.
From June 14 through to October, Sea Shepherd crew members from around the world will return to the Danish Faroe Islands to once again halt the mass slaughter of long-finned pilot whales and other small cetaceans in the region.

The campaign marks the commencement of Sea Shepherd’s increased presence in the North Atlantic, where the organization will use its Southern Ocean successes to combat the continuing, unnecessary slaughter of cetaceans.

For hundreds of years the people of the Faroe Islands have been herding migrating pilot whales from the sea into shallow water and slaughtering them. The slaughter, known by the Faroese term ‘grindadráp‘ or ‘grind’, is a brutal and bloody tradition that wipes-out entire family groups of whales and dolphins at one time.

After being driven into inlets (fjords), distressed whales beach themselves or are dragged to shore by their blowholes with gaff hooks (blásturkrókur). A spinal lance is then used to cut the whale’s spine as they lie next to family members.

Some pilot whales suffer for as much as 30 seconds while others can take up to four minutes to die. For these animals, whose intimate family relationships and capacity to suffer is well documented, the grindadráp delivers a lengthy, harrowing and traumatic death.

Sea Shepherd takes its 2015 Faroe Islands campaign name from the Faroese term, sleppid grindini. Literally meaning “set the whales free,” the term is the traditional order used by the grind foreman to call off a whale hunt.

“This year, again, our crews will do everything legally possible to ensure that the pilot whales of the Faroe Islands are set free. Sea Shepherd’s intervention in the grind is not aimed to impose values on the Faroese people. It is part of a global movement that is driven by the passion to protect these pilot whales and all of the precious life in our oceans.”

Operation Sleppid Grindini will be Sea Shepherd’s sixth campaign in the Faroe Islands, and will be led by the organization’s strongest sea presence in the region to date.

Following their return from the epic Southern Ocean campaign, Operation Icefish, the Sea Shepherd ships Bob Barker and Sam Simon will be joined by Sea Shepherd’s fast trimaran, the Brigitte Bardot in the steely waters of the Faroe Islands.

The ships will be supported by a land team, led by Rosie Kunneke of South Africa, that will assist with coordination and providing information through what are some of the bloodiest months of the slaughter.

“The practices undertaken during the grind, in which pilot whales and dolphins have to endure hours of cruel and stressful driving towards shore before being slaughtered in the presence of family members, would not be tolerated in any slaughterhouse in the developed world.

“With the introduction of modern conveniences and trade, and the safety warnings against pilot whale meat consumption, the people of the Faroe Islands no longer require whale meat for sustenance. It is time that we progress beyond this unnecessary, excessive and redundant cruelty and set the whales free, for good.”

Sea Shepherd uses innovative direct-action tactics to investigate, document, and take action when necessary to expose and confront illegal activities on the high seas. By safeguarding the biodiversity of our delicately-balanced ocean ecosystems, Sea Shepherd works to ensure their survival for future generations. For more information, visit: http://www.seashepherdglobal.org/