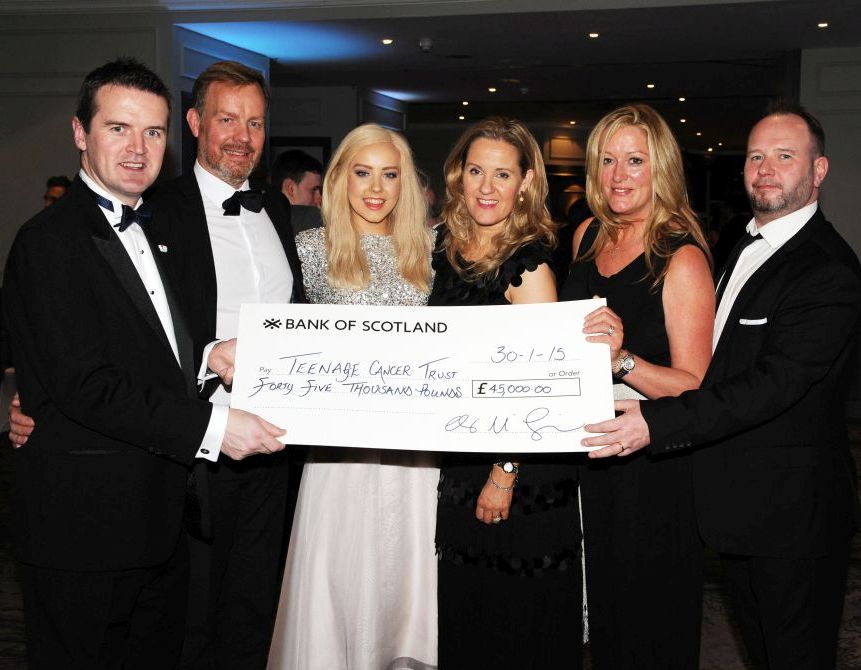 A group of hoteliers inspired by the bravery of an Aberdeenshire teenager who is battling cancer has smashed the target of a fund-raising campaign set up in her name.

Aberdeen City and Shire Hotels’ Association (ACSHA) has handed over £45,000 to the Teenage Cancer Trust – more than double the size of the donation that it had initially hoped to make.

ACHSA members rallied round for the charity after learning how it was supporting 18-year-old Abigail Cox – the daughter of hotelier and association member Gary Cox – while she is undergoing treatment for Ewing’s sarcoma.

Abigail has received treatment for her illness – a rare bone cancer affecting children and adolescents – at units run by the Teenage Cancer Trust in Glasgow and Edinburgh. She has now completed a course of chemotherapy and will undergo an operation later this week to remove bone where the tumour started.

ACHSA decided to embark on the fund-raising campaign to show their support for the Cox family from Inverurie, and to highlight the work being carried out the by the Trust. Members handed over the final tally at the Aberdeen City and Shire Tourism Awards, and were joined by Abigail and her parents, who run The Northern Hotel in Aberdeen and Edward’s nightclub in Inverurie.

“After a long and difficult year of treatments my life will soon be back to as normal as possible.

“The Teenage Cancer Unit at the Western General in Edinburgh really made my stay in hospital as easy and as comfortable as it could be. My year would have been so much more difficult and depressing without them, and I can’t thank them enough.

“You are surrounded by people your own age who can really relate and understand what you are going through and the nurses are always so friendly and positive. They help you to keep a smile on your face. Everyone involved in The Teenage Cancer Unit genuinely cares about you and your recovery.

“They treat you like a teenager and not just a cancer patient. The unit provided the best possible support for both me and my family.”

“We thought that a £20,000 target was ambitious, so never in our wildest dreams did we consider that we would raise double that amount. I’m really proud of the way in which members have embraced this opportunity to support a charity which has been so instrumental in helping one of our own.

“The presentation was made all the more special by the fact that Abigail and her parents were able to join us on stage. It was great to see that Abigail has been responding well to her treatment, and I know that is in no small part down to the help she has been getting from the Teenage Cancer Trust.

“She has been receiving treatment in the south of Scotland, miles away from family and friends, and the fact that the Trust has been able to treat her in centres specifically for teenagers, alongside teenage patients, has helped her to remain positive.”

In addition to organising collections in hotels and setting up an online fund-raising page, hotel managers staged a Workathon in which they walked between member hotels and carried out tasks from serving drinks to cleaning floors at each venue. Some of the proceeds from ticket sales for the tourism awards was also donated to the cause.

Christine Jason, head of regional fund-raising (North) for the Teenage Cancer Trust, is full of praise for the work of ACHSA members and how they worked together.

“We have been overwhelmed by the enthusiasm and energy of everyone involved and this has resulted not only in a significant level of funds being raised in the North East but also an increased awareness of our work.  The Association has been instrumental in introducing our work to businesses in Aberdeen and Aberdeenshire.

“The money raised through the Association will go towards ensuring every young person with cancer has access to expert support.  It will mean that they are treated in an age-appropriate environment and given the medical and emotional support that they need.”

Aberdeen City and Shire Hotels’ Association represents 43 independently operated hotels and conference venues. These hotels provide around 4,100 bedrooms in Aberdeen and Aberdeenshire. The Association is committed to improving the quality and standard of hotel services and to furthering the overall standards of excellence and hospitality within the region.