Donald Trump bought the Menie Estate in 2006. By 2008, unprecedented planning permission was granted to create ‘the world’s greatest golf course’. The promise was a one billion pound spend, jobs for local people in the thousands, an increase in tourism in the thousands, and prosperity.

Menie Estate residents and those who stood up for them were vilified in the press; farmer Michael Forbes was said by Trump to live in a ‘pigsty’. What is life like at the estate for residents now? What are some of the issues and problems? Suzanne Kelly reports, in the first of a series.

A brief history of Trump
It was all meant to be better, so the proponents promised us: thousands of jobs, houses, tourists and money pouring into the north east. Never mind the loss of unique greenbelt and wildlife. To achieve this end, the existing environmental protection and normal planning procedure were swept aside.

Donald Trump was in the news whenever he opened his mouth, got on or off a plane, dined with Alex Salmond, or spoke out against wind farms. But when he vilified Michael Forbes, he really went to town. Forbes and his wife, and 90-year-old mother Molly live on a farm on the estate. They refused to move for Trump. Trump has had some damning things to say about the Forbes family, calling Michael the ‘village idiot’. About the Forbes Farm and home Trump said:-

“I just wish he would clean up his property, it is a pig sty. It’s terrible, his barn is all rusty and falling down. The hotel has the chance to be something really outstanding but it’s awfully hard when a window is overlooking a slum and you see rusting oil cans.” http://www.express.co.uk/news/uk/177471/Protester-lives-in-a-pig-sty-says-furious-Trump

Trump International Golf Links Scotland must therefore be a rather special place. It recently won “The first and only Six Star Diamond Award” in Scotland, from the American Academy of Hospitality Sciences [what that? Ed]. The property must of course be cleaned up, there must be nothing slum-like about the place at all.

It may just be a coincidence that Donald Trump is on the American Academy of Hospitality Sciences Board, where he is listed as ‘Ambassador Extraordinaire’. Surely then, he and his companies know all about cleanliness, hygiene, environmental management and waste management.

At first glance at the golf course you see giant clocks, oversized lamps, parking, and a rather nondescript looking ‘temporary clubhouse’. Here is what you see today if you step off of the beaten track, photos supplied to Aberdeen Voice. 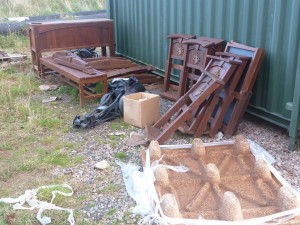 Crestfallen
Wooden frames featuring that Trump family crest are part of the debris off to the side of the parking lot, just adjacent to the Munro family property. 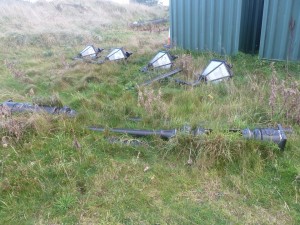 Illuminating
Lights which shone into the Munro cottage from the parking lot were, amazingly, ordered to be removed by the council. On the day the council was to visit to make the decision about the lights, the lights were not switched on, as they normally would have been.

They are now dumped in the grass. Hopefully any chemicals such as mercury, or other toxic materials, will have long since been removed, even if the lamps remain. 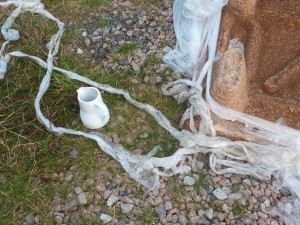 Teed Off
Possibly most worrying are the yards and yards of plastic waste which could prove fatal to wildlife, either birds, or aquatic creatures, should it wind up in the nearby sea. The shore at Menie is unfortunately regularly peppered with plastic waste from marine activity.

A Lot Of Old Rubbish 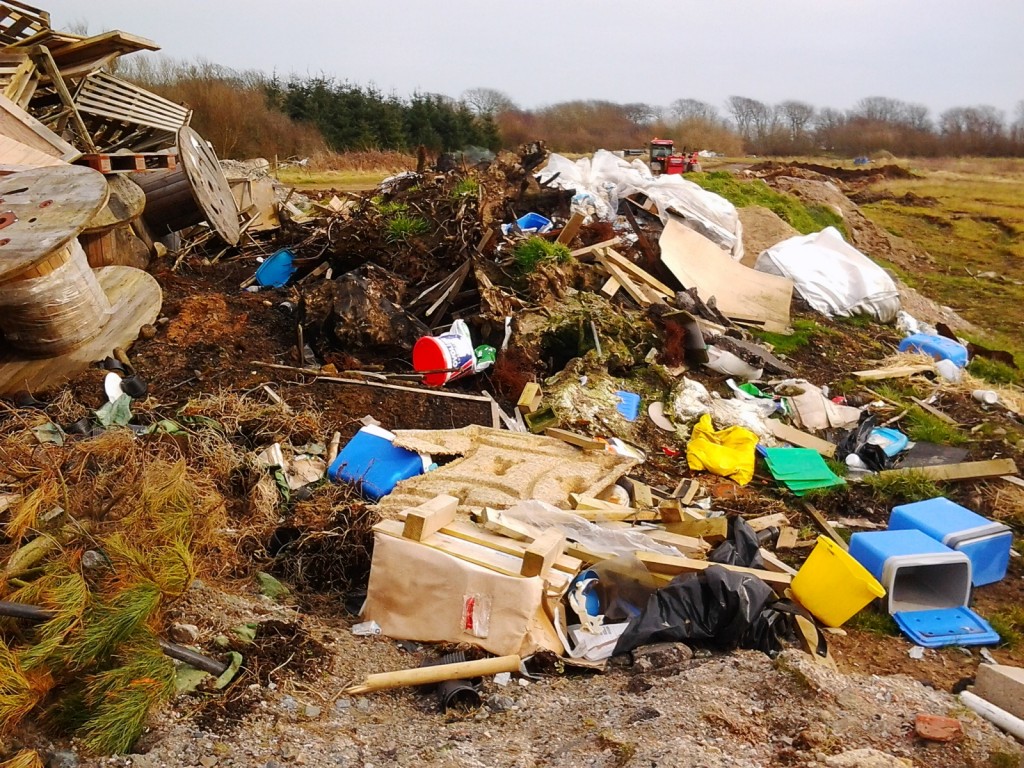 These photos were taken in March 2013. They show mounds of rubbish on land on the Menie Estate. Whether the trash was burnt, buried, or disposed of legally remains unclear.  The issues with these piles of mixed waste include:

Paradise
Molly Forbes keeps chickens at her home on Michael’s farm; she calls her house ‘Paradise’.   Michael and Sheila live on a working farm; there are cats, chickens and geese (including a wild goose which is currently visiting).  As far as I could see, none of the taps at the farm place are gold plated; there are no red carpets and no hired showgirls to greet visitors. There are a good number of chickens, a few cats, and a warm atmosphere. Molly, Sheila and Michael might not get a ‘6 diamond’ special award. Perhaps they don’t want or need one. 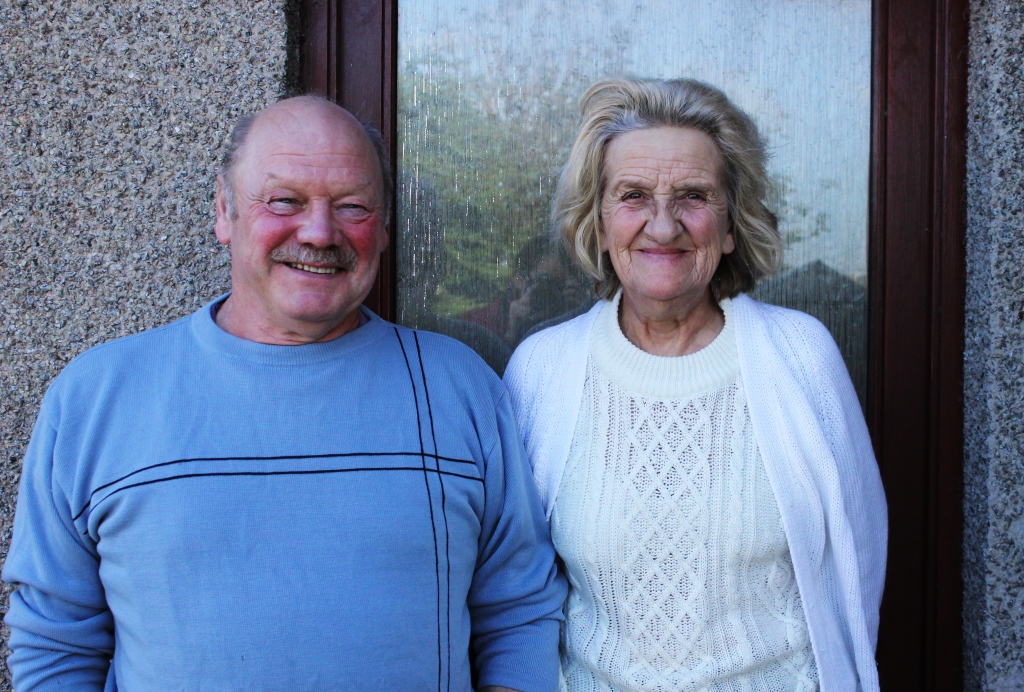 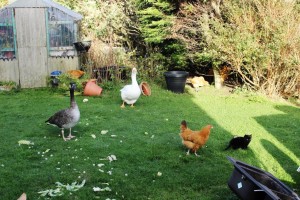 Wrapping Up
Perhaps rubbish is not really pollution if it has a Trump family crest carved on it. Perhaps the garbage will be properly segregated, recycled, and disposed of in the very near future. And just maybe someone who lives in a glass house who is so offended by the goings-on at a genuine working farm should clean up his own act before throwing any more stones.  Trump Golf Links has been asked to comment on the waste close to Leyton Farm Cottage.

5 Responses to “The Trouble With Trump Part 1 – Trump Dump”