Old Susannah’s news round up of current events local and larger, online and offline. By Suzanne Kelly.

Now that summer has arrived, things are heating up, at least in Aberdeen Town Hall, and on Facebook. There are a mere 99 days to go before the referendum on Scotland’s future. I for one will be sad to see the end of the friendly debates, good humoured disagreements, and logical discourse.

One or two interesting memes have made the rounds on Facebook (memes are digital posters, usually pictures and text, trying to prove something, to mislead, or just to promote laughter. Hard to tell with some of them what the desired result is).

More on that later.

Rick Mayall has passed away; an alternative comic who packed a heck of a lot into his 56 years.  The Young Ones, Bottom and The New Statesman were among his great comic works.

If you missed The New Statesman, it followed the life of the fictional MP Alan B’Stard.  B’Stard the MP was elitist, completely dishonest, devious, greedy, self-centred,  egotistical, ambitious beyond his talents, and cared for no one but himself.  As such, it will be hard for any of us today to imagine such an MP  could exist, but it was a hilarious series at the time.

Of course, there was the biased ‘consultation’ on the short list of 6 designs for Union Terrace Gardens; we were not allowed to vote for leaving the gardens alone.

Then again, there was the consultation for 6 possible routes for the Aberdeen Western Peripheral Route. Tens of thousands of pounds were spent on roadshows displaying the proposals, the public voted on these routes – and then at the end of the day, a brand new route was invented to cut through the greenbelt (what’s left of it) and chosen with no public say.

Then there was the public consultation on planting a tree for every citizen.

The slight problem there was that the city planned in advance to exterminate a herd of deer to plant the trees on a rubbish tip where a previous attempt had failed and cost £43,800, and the city decided  not to burden the public with these minor details during the consultation, and when the fact came out at last, they refused to listen to the 3500 people and community councils that objected.

Yes, a consultation is an important exercise to go through here in Aberdeen. If you do want to comment on Muse’s plans for Provost Skene’s house, I’m sure your views will be listened to (I’m sure this consultation will be different); you can do so here (just put in reference number 140755.

The responsible department is aptly called ‘Planning and Sustainable Development’.

The word ‘Planning’ refers to all the well thought out, expertly organised projects that never deviate from the approved designs (from the council house car garages that were too small to get out of your car if you drove into them to the approval of hundreds of homes by the Haudagain Roundabout).

Sustainable Development refers to building thousands of homes in boring greenbelt land while the city centre disused brown field sites sit empty, adding character to the area. So what if there are no thoughts given to infrastructure and the roads come to a standstill? We will be a sprawling (urban sprawling) metropolis before you know it.

There is the little matter of our air pollution continuing to worsen, our C02 production is increasing, and our health suffering.   But we’ll be making money.

But there is some good news:  Michael Gove is going to punish parents if their children are not ready to learn and don’t show respect!   Result!

Even better, we are going to teach children British Values (perhaps this term will need its own column to be sufficiently defined). It’s hard to understand why young people don’t respect authority figures. A few teachers have turned out to be child abusers, woeful incompetents and/or would-be brainwashers, but that can’t be the cause of any disrespect or mistrust, can it?

Perhaps we could ask some of our MPs why young people have problems respecting authority figures.  We can’t ask UKIP Man Colin Brewer why he recommended putting disabled children down as if they were deformed livestock; he’s passed away.  It would have been nice to get his perspective on respect.

We could have asked Maria Miller, former MP and Culture Secretary for her expert opinion on youth culture – but unfortunately she’s spending more time with her family after deciding to resign, coincidentally she was involved in an expenses fiddle, and allegedly intimidating a journalist.

this book has something to do with ideas like truth, justice, racial equality and fairness

We could ask elder Statesman Tony Blair to write something up on the matter; after all, his creative writing flair turned a fairly tame dossier into a terrifying call to war, when he did a bit of editing, and told us that Iraq was able to hit us with chemical weapons within 45 minutes (Perhaps I shouldn’t include the Iraq War – look how well that turned out for the Iraqi citizens after all).

Pity no one ever found those weapons of mass destruction that were meant to be pointing at us.

There are, as you can see, plenty of role models to inspire young people to respect authority figures. Let’s punish those parents, and ban a few books while we’re at it. Gove of course has got rid of a few books of late from the curriculum, including some obscure work called To Kill A Mockingbird.

Apparently this book has something to do with ideas like truth, justice, racial equality and fairness. Doubt there is room or need for such a book these days.

Anyway, on with some definitions, based on some memes doing the rounds on Facebook

Simile: (Eng. noun) comparison between equal items – such as ‘breakfast is to morning as lunch is to afternoon’

It’s great when you come across really clever memes using simile for comparing things.  One such meme that has been doing the rounds for at least 15 months is pictured below. The source of this one is difficult to pin down, but surely it can’t be anyone connected with either advertising or the tobacco lobby.

The idea is that putting images of diseases caused by smoking on cigarette packs is exactly the same as putting pictures of animal experiments on cosmetics labels, or obese people on fast food wrappers, or deeds of crooked politicians on tax returns.

As really clever as this might seem at first, alas!  There are just a few problems with the simile being used.

In the first place, if we are to look at cigarettes, cosmetics, fast food and politicians, you might conclude that only one of these things is: a.  always damaging to your health, b.  harms those around you, and c.  has no redeeming health benefits at all.  (No, I don’t mean politicians, I mean cigarettes).

It has been possible for decades to buy cosmetics that aren’t tested on animals, and Europe has pretty much called time on animal experiments for cosmetics (but note – dogs and other animals are often made to inhale tobacco smoke in remarkably cruel, unnecessary experiments).

Moving swiftly along, fast food and alcohol are not instantly harmful (but should be ingested in reasonable quantities), but as the WHO will tell you, all smoke is hazardous not only to the smoker, but those around them. Sorry, this meme may look very clever at first, but it is completely illogical.

Then there are rather more sinister memes. Two London murder victims are compared side by side.

Why was there no 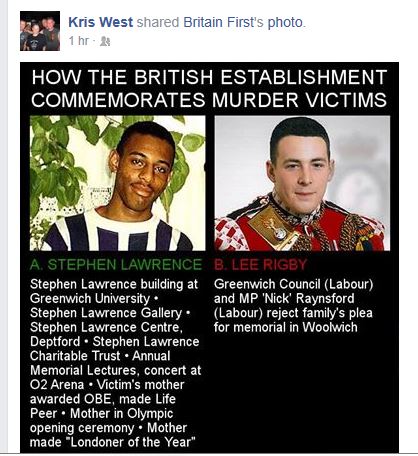 monument for one, and for the other all sorts of awards given to the relatives? How unfair this looks at first glance.

The two being compared are murdered black UK citizen Stephen Lawrence, and murdered UK soldier Lee Rigby. Both were innocent of any wrongdoing; both were brutally, senselessly murdered.

How unfair that Lawrence’s memory and family were treated differently – or so you were supposed to think. Happily, the men who executed Rigby were immediately caught and brought to trial. What this little, innocent-looking meme conveniently overlooks is that Lawrence’s family, witnesses and friends were put through hell by the police.

The investigation overlooked vital clues, which were allowed to be destroyed by those implicated. The police spied on and tried to discredit witnesses.

The cover-up that was attempted was thwarted in no small part by the courage and dedication of the Lawrence family. Perhaps the nice people who created this meme just didn’t know about the Lawrence case background? After all, they have a lovely-sounding name, ‘Britain First’.

The D-Day anniversary came, and with it came stories of heroism, the scale of the human tragedy of battle – and memes from Britain First. Many people shared these memes without checking what group was behind them, and in doing so swelled the Britain First viewing figures and popularity stakes.

Thankfully we now also have on Facebook ‘Exposing Britain First’ – a group combating the propaganda war that Britain First is waging.  Old Susannah finds Britain First using WWII commemorations just a bit confusing: Britain First seems to want us to overlook the small fact their racist, nationalist values are exactly what the soldiers Britain First posts about were fighting against. 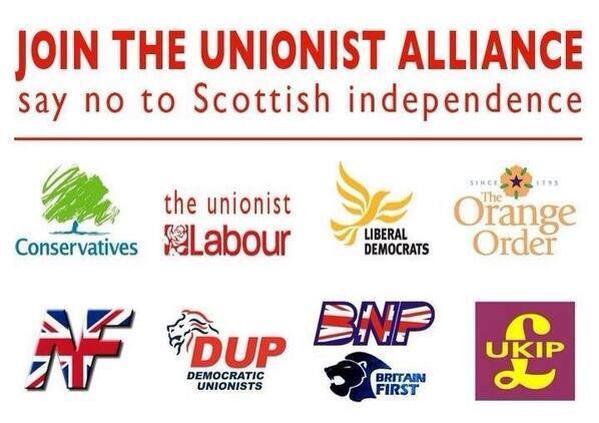 This meme popped up on Facebook, using what looked like logos from a wide range of groups from the BNP and UKIP through the Conservatives, LibDems and Labour.

It was headed Unionist Alliance.  People saw this and shared it, with suitably outraged comments against Labour for joining this alliance – only it doesn’t exist.

I tracked down the originator, who then told me ‘it was an illustration’ and not a real alliance.

Pity those who saw it didn’t have that information. The Labour Logo was also altered in this odd meme. Labour are looking into it, as may be other parties.

Wimbledon Rules: (Eng. compound noun) – rules for those attending tennis matches on how to dress, act and not to wave banners or flags. 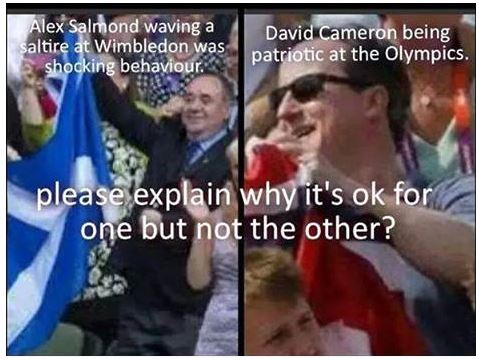 So – what’s wrong with Alex Salmond waving a giant saltire when Cameron can wave a flag at the Olympics?

I guess the creator of this one, who hasn’t answered my messages yet, will let us know if he was in the dark about the Wimbledon rules, widely publicised at the time of Salmond’s social gaffe.

So – be careful what you believe, who’s trying to get you to share their memes, and do look into things before jumping to the conclusions you’re being led to.

Next week: Send in any memes you want to have looked at; there are plenty out there.

One Response to “Old Susannah’s Journal No. 153 – The Stuff Of Memes”