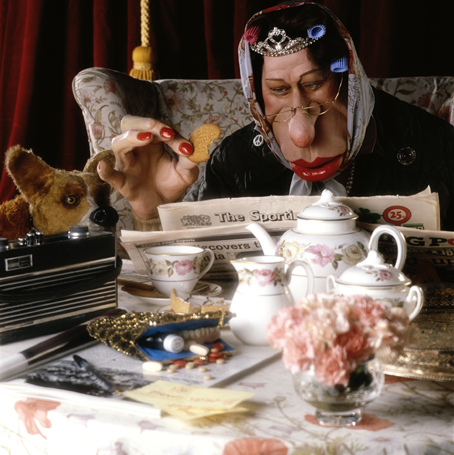 For 12 years the establishment and celebrities were grist to the Spitting Image mill; nothing and no one was sacred. If you weren’t laughing, you were outraged. By Suzanne Kelly.

Issues of the day were brought to light, political sleaze was explained and mocked in spectacular fashion, and well, those of us with a sense of humour had a great laugh.
A new exhibition in London’s Cartoon Museum pulls together puppets, memorabilia, news reports and anecdotes. It is a small exhibition in a small museum.

However, while floor space may be limited, the depth and breadth of the collection and the Spitting Image exhibition is deeply impressive.

This is also one of the most important shows you’ll have the chance to see, if press freedoms (facing new threats) and political satire are to be understood, preserved and appreciated.

The Cartoon Museum has been flying the flag for the cartoon as art and entertainment since 2006, and features a great diversity of art going back centuries. There are simple cartoons such as ‘Popeye’ which were simply intended to amuse. There are biting political cartoons from the distant past, and social commentary cartoons spanning decades which, when collected and curated, form an extremely important historic record.

But this Spitting Image exhibition must be the most impressive and engaging of all the museum’s major exhibitions to date.

There is an impressive schedule of evening talks and events featuring those who worked on Spitting Image. Roger Law (a founder of SI with Peter Fluck – listen to them on Desert Island Discs here  http://www.bbc.co.uk/programmes/p009mlw9 ) will deliver an illustrated talk on 19 March on ‘The Art of Theft’.

There is a Spitting Image Roundtable on 7th May with people behind the show, and a ‘Design your own puppet character’ session with puppet maker and puppeteer Scott Brooker.

“At 10pm on Sunday, 26 February 1984 British television witnessed the birth of a new phenomenon – a satirical puppet show which would push the boundaries of taste and decency, present the Royal Family, politicians and celebrities alike in surreal yet telling situations, and become one of the most talked-about programmes of the 1980s and 1990s. The country had never seen anything like it.” – CartoonMuseum

We may never see the like of Spitting Image again; it was the reactionary product of a heady mixture of Thatcherism, international issues, domestic political power struggles, the Reagan/Thatcher special relationship, and later on celebrities and sports. Apparently Peter Cook once remarked that the sports vignettes were his favourites.

Perhaps they were, but Spitting Image’s satire wasn’t so much biting as it was scorching. Many times it pushed the envelope just a bit further than people expected; many viewers for instance finding the Queen Mother puppet a bridge too far. 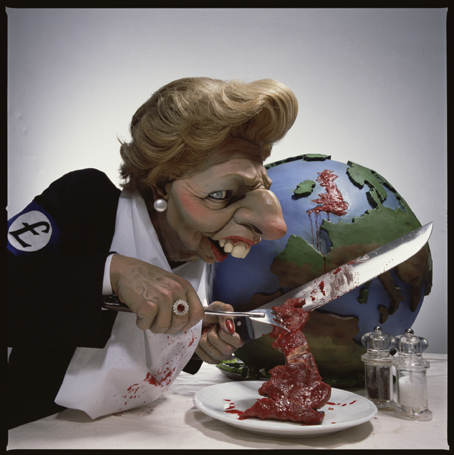 Memorable puppets included a completely grey John Major, a schoolboy Tony Blair sporting an ‘I’m the Leader’ badge, The Queen, and a slobbering Roy Hatterslea will be in the public conscious for quite some time.

In the display was a never-used Osama Bin Laden puppet – it oozes menace.

Imagining what could have been made of this in a sketch is a powerful idea to grapple with; the puppet sits in its case waiting for an opportunity which never materialised.

The exhibition screens Spitting Image episodes, and on the day I visited, many people stopped to watch the segment depicting how Zola Budd came to be English rather than South African, and while doing nothing more spectacular in her Olympic race than tripping up American Mary Decker, Budd nevertheless managed to make a bit of money from her exploits.

Spitting Image was a platform of perfect political satire and the springboard for many of our most important talents – Ian Hislop, Nick Newman, Harry Enfield, Rory Bremner, Hugh Dennis, Kate Robbins and John O’Farrell are some of those who were involved.

The show evolved from the partnership of artists Roger Law and Peter Fluck who met in Cambridge as students. Cambridge and its Granta magazine must have been quite a crucible. Peter Cook and Dudley Moore sprang from that Cambridge seam, and were responsible for an increase in political satire in the 1960s.

Cook’s ‘Establishment’ nightclub in Soho must have been incredible; Roger Law was also involved in that venture as an artist.  Cook of course lent his support in many ways to Private Eye magazine, still the zenith of political satire in the UK today.

The exhibition was well attended when I was there; people of different ages and several tourists wound their way through the gallery. Watching the episodes being screened on a wall brought back the importance of the show; we visitors watched in silence except when laughter broke out which it frequently did.

The puppets are quite something to see; the fact they were collected together at all is something of an event. Many were auctioned off and the collection dispersed; one puppet disappeared only to surface years later at a boot sale – from where it was rescued.

The ephemera and historical notes gave insights from many different perspectives; it was safe to say the visitors read the information presented with relish. There are many anecdotes which I won’t spoil by sharing – do go visit the museum if you can.

It’s a gem of a show, and I only wish it could tour the country (with a stop in Aberdeen of course).  Actually, I wish that we could have a new version of Spitting Image for today. However, there are many reasons whatever the next big thing in popular political sarcasm is, it won’t be Spitting Image.  Gallery Director Anita O’Brien had a few minutes to speak; she explained:-

“Satire is one of the great art forms which Britain invented, which continues to thrive. The difficulty with Spitting Image now, though people would like to bring it back and feel it would be wonderful is that the political climate and landscape have changed, and people are not as politically involved. I think when it comes to people the nature of their political involvement has changed. The media has changed; you had four channels then; it is far more fragmented now.

“I think people do different things – there is an emphasis on CGI, and people’s expectations of media has changed – people expect a different look and feel (to the latex puppets of SI). I also have to say cost – I just don’t think the media would be able to bear it – it would be very labour intensive, and a huge number of people would have to come together.

“I think that might be the biggest stumbling block. Also they were all very involved and quite committed to what they were doing. They perhaps hoped they would bring down the government; it didn’t happen [we laugh]. This was the ‘80s; there was a very strong political engagement; very anti-Thatcherite.”

I suggest the fact that the programme existed had an impact on political engagement, and suggest that Spitting Image was the reason people even knew who cabinet ministers were. O’Brien commented:-

“I think a lot of people who maybe might not have read political columns at the time would have watched the programme… Peter Cook said he actually enjoyed the sports more than the politics; if he wanted politics he would have read a newspaper. We’re hoping that people will come who might not have seen it and can come and become more aware of it, and gain a view into satire.”

But what’s the point of political satire? Is it nothing more than childish, vulgar base humour with no hope of achieving anything?

Here’s an example then:-

“In the mid-1980s Gary Trudeau, writer and illustrator of the comic Doonesbury used satire to help put an end to a racially motivated law in Palm   Beach, Florida. The law in question mandated that all workers or employees, including gardeners, retail clerks, janitors and taxi drivers, who were part of a racial minority were required to register with police and obtain and ID card within 48 hours of accepting a job.

“In 1985, upon discovering the continued existence of this Jim Crow legislation, Gary Trudeau illustrated a series of comics lambasting Florida’s government for its continued support of a racist law. By 1986, local politicians drew up the “Doonesbury Act” and repealed the outdated law.” – http://www.sarcasmsociety.com/satire.html

Sarcasm and political satire are sometimes the only weapons people have against powerful institutions and powerful people. We now have threats to our free press coming in light of the News of the World hacking scandal, wherein a sledgehammer is being used to crack all the nuts, good ones and bad ones, for the actions of a few corrupt, powerful people in the press, who were buying information from the police.

Compared to the laissez-faire approach and support the government gave to the banking sector in light of the vast scale of corruption it was and is riddled with, does the recent attacks on press freedoms really warrant any new law? Should those who are meant to be scrutinized by a free press have the right in a democracy – whatever that is – to limit the important checks and balances the press provides?

Let’s hope not. It is bad enough that the press is under fire as a whole institution for the actions of a few.  Let’s make sure that political satire remains a protected, powerful and widely-used tool of dissent and change.

And with that, I buy a few posters. As I’m leaving, I’m thinking about Private Eye, Hislop, Ingrams, Granta, and ultimately Peter Cook.

Before I leave, I ask when we’ll see the like of Peter Cook again; ‘Indeed’ is O’ Brien’s answer.

Spitting Image – From Start to Finish runs until 8 June 2014

One Response to “What’s Satire Ever Done For Us? The Spitting Image Exhibition”