February 4, 2014 – BrewDog launches the world’s first protest beer – ‘Hello My Name is Vladimir’.  Within 24 hours the flagship Aberdeen bar had completely sold out of its stock of ‘Vladimir’ both bottled and draft beer. 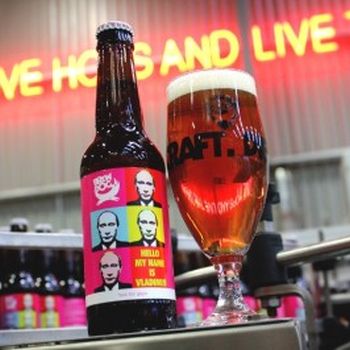 Scottish craft brewery, BrewDog has today launched Hello My Name is Vladimir, a craft beer apparently ‘not for gays’ that carries an image of the Russian premier wearing make up on the label.

The ale is the world’s first ‘protest beer’, aiming to support LGBT communities by undermining the potential of the Winter Olympics to deflect attention from Russia’s recent law banning ‘homosexual propaganda’.

“We sincerely hope that when Vladimir Putin is tired from a busy day riding horses with his top off, grappling with burly men on the Judo mat or fishing in his Speedos, he reclines on a velvet chaise longue and has one of his handsome helpers wet his whistle with a glass of Hello My Name is Vladimir.”

“As Hello My Name is Vladimir is clearly marked ‘not for gays’ we should bypass the legislation introduced by Putin outlawing supposed ‘homosexual propaganda’, so Vlad shouldn’t have an issue with it.

“It’s been our mission at BrewDog to upend the status quo in whatever form it occurs.

“Whether it’s the stranglehold the mega brewers have had on beer production in Europe over the last 50 years, or in the case of Russia, the sick legislation that discriminates against millions of its citizens.

“Our core beliefs of freedom, integrity and passion drive all our actions. Since we started in 2007, we’ve always striven to strike fear at the heart of the gatekeepers and establishment, the launch of Hello My Name is Vladimir is simply a continuation of that tradition.”