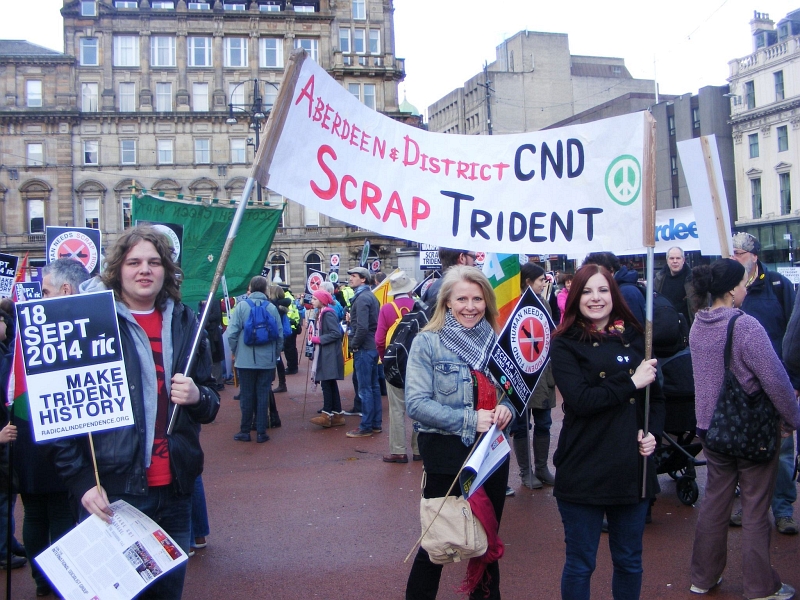 The Annual General Meeting of Aberdeen and District CND will be taking place at 7.30pm on Monday 10th February at Unite the Union 42-44 King Street. The Guest Speaker will be Flavia Tudoreanu Assistant Co-Ordinator of Scottish CND who will be giving a presentation on the work of Scottish CND.

Aberdeen and District Campaign for Nuclear Disarmament has been very active over the past year.

Last year’s AGM was on February 11th at the Scottish CND AGM at the end of 2012 a motion for Scottish CND had been passed to support the Yes campaign but had caused some division in the membership.

Both of our delegates Mike Martin and Christian Allard had voted against the motion however at our AGM a clear majority supported the decision for Scottish CND and Aberdeen and District CND to support the Yes Campaign. The Yes Campaign is in favour of getting rid of the Trident Nuclear Weapon system from its base at Faslane in Scotland.

The first event of the year was an excellent debate about NATO. The SNP had at their Annual Conference of 2013 reversed their long held position of pulling out of NATO. This led to a number of members including two MSP’s leaving the SNP. One of these MSP’s John Finnie spoke against being involved with NATO and Alex Johnstone MSP for the Scottish Conservatives spoke in favour of NATO.

The debate was hosted by the Politics Society at the University of Aberdeen and was attended by both students and the general public.

On Saturday 30th March we held an event outside Marks and Spencer’s  to promote the three days of action taking place on the 13th-15th April including a demonstration, nonviolence training and a blockade of Faslane. The event was opened by the Guarana street drummers and there were speakers from the SNP, CND, the Faslane Peace Camp, Aberdeen Against Austerity and the Palestinian Solidarity Campaign. This was followed in the evening by a party and non-violent action training on the Sunday.

We organised a nearly full bus to the Scrap Trident Demonstration on the 13th April which was a particularly lively event and attended by about 4,000 people.

Some of our members attended the non-violent training on the Sunday and a number of activists attended the blockade of Faslane on the Monday which obtained considerable media coverage. Darren MacDonald was arrested for sitting down and blocking the entrance to North Gate but later charges were dropped. Well done Darren!!

We had our annual Hiroshima Memorial event on August 6th with about 100 people in attendance. We had a wide variety of speakers from political, trade union, and religious groups, as well as poems and songs. We then released 200 paper lanterns down the river Dee.

On the 22nd September we had a music and poetry night to celebrate International Day of Peace. This was attended by about 80 people, and as well as having some magnificent performers, the concert helped us raise much needed funds.

We have been active concerning the war in Syria sending out press releases with some success. I was interviewed by STV (though the footage which was going to be national was not used). In particular we get excellent coverage in our local online newspaper Aberdeen Voice.

On the 27th September we held a public meeting ‘Why the NATO powers must not attack Syria’ with Dame Anne Begg MP and Mohamed  Janaby PhD, student in public international law as speakers. The turnout was not high but the standard of the debate was greatly enhanced as we had people from Syria, Iraq, Libya and Palestine in the audience.

We have had an influx of younger people into our local group and we are delighted that one of our most active members Christian Allard has become an MSP. Christian has offered to host a meeting at the Scottish Parliament to be organised by Aberdeen and District Campaign for Nuclear Disarmament.

We were delighted that both of our local Labourl MP’s Frank Doran MP and Dame Anne Begg MP have signed EDM 150 and we have written to the Labour Party Shadow Defence Ministers Jim Murphy and then his replacement Vernon Crocker   supporting their actions and questioning strongly the Labour Party leaderships continuing position to support the replacement of Trident.

Unfortunately we received no reply.

We have also raised concern with the Scottish National Party concerning any potential delay in getting rid of Trident if Scotland becomes Independent.

We received a reply from Nicola Sturgeon stating:

Mike Martin. Christian Allard and Jonathan Russell attended the Scottish CND AGM in November 2013 and we put forward a motion to re Missile Defence which was unanimously by the AGM Meeting

Submitted by Aberdeen and District CND with help from Yorkshire CND

a) Conference notes that:

i.        The US continues to pursue ‘full spectrum dominance’ by increasing its military activities in space;

ii.        The North of Sweden is being used by NATO as a military practice ground and to test and develop new killing technologies such as drones;

iii.        The US has helped establish a satellite ground station in the Svalbard islands in Norway which violates the Svalbard Treaty requiring the archipelago not be used for military purposes;

iv.        President Obama has increased the US deployment of missile defence bases in Europe which have been linked with those of NATO;

v.        The deployment of space, ground and sea based missile defence components by the US and NATO is undermining international stability and putting further agreements on nuclear disarmament at risk;

vi.        The Fylingdales radar in North Yorkshire is part of the US and NATO system;

vii.        The US spy base at Menwith Hill plays a leading role in US intelligence led warfare, providing information such as that used for targeting killer drones and is set to become a relay station for US space based missile defence components;

i.         To support the Global Network Against Weapons and Nuclear Power in Space and Keep Space for Peace week and efforts to close missile defence bases in the UK;

ii.         Distribute copies of the Yorkshire CND report ‘Lifting the Lid on Menwith Hill’ which describes the role of the base in some detail.

iii.        To produce a Missile Defence Briefing and other related materials to highlight the above issues;

Over the coming year we intend to be doing the following.