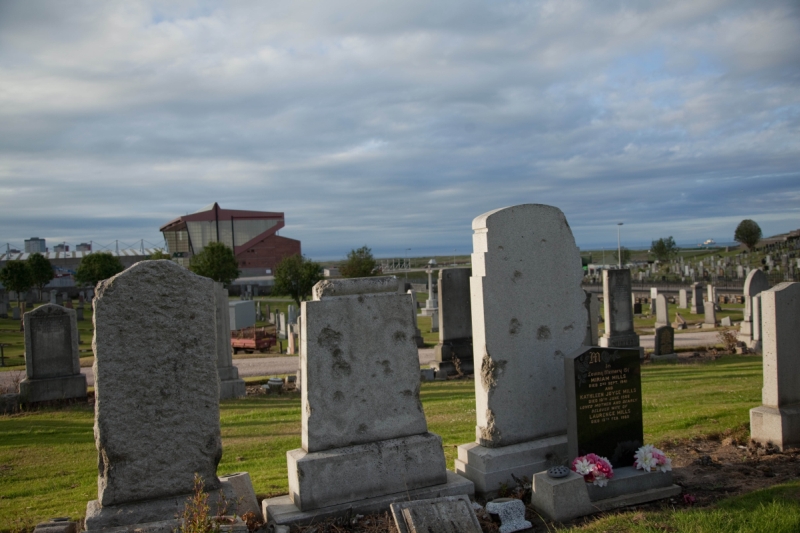 Cody’s gran had passed a few weeks ago.  Not a huge surprise really since she had been some ripe old age or other.
The surprise was when the family learned where she had died. In the Canaries would you believe and with no travel insurance whatsoever!

What to do?  Return the body for a proper burial or lay her to rest in a far off land?  Ignore the whole thing and let the authorities deal with it all?  Cremate the remains and fly her back in a wee box?

“It’s no’ as though she had money set aside for all this” said Cody’s mum.

“I mean, she lived on her own in a wee flat in Torry.  How the devil did she get there anyway?   I mean, the Canaries of all places!  Jesus!  It’s a wonder they even let her on the plane.

“Buggered if I’m paying this all on my own, you’se will all need to chip in, no exceptions!  See that Ryan air!  No complaints; no refunds; no seats!  That O’Leary should be ashamed.  Him and that Branson Sauce man.  Bugger the both of them! “

And chip in they did!

A few thousand pounds emerged, plus some Euros – reluctantly in some cases – from the recesses of the family pockets.  And there was even a 50 Yuan note from some distant cousin who’d been to Tibet and just wanted to make sure you wouldn’t forget it.

Cody’s gran was duly, and legally, flown back to Aberdeen in a wee wooden box to await the opening of the family lair and the gathering of the clan.

TrinityCemetery lies not far from the beach and within sight of the creaking grandstands which are home to Aberdeen FC.  On a good day in summer the views are good and in all honesty it must be a good place to lie; providing of course that you’re dead that is.

The day of the internment was wet and miserable however, with a howling sleet driving inland off the North Sea and no weather break forecast for the next two days.

There was a good turnout considering.  As well as family there were Cody’s mates, plus a few neighbours of Mrs McLaughlin who, in all probability, had never taken much time over the old woman but who, no doubt, felt obliged to show face as an indication that they maybe had.

Cody’s sister Annie said a few words, as did his brother Jesse who had flown in from Orkney especially for the occasion.

“She was a fine woman,” said Annie, “always ready to help anyone and a pillar of the community.”

“Sadly missed,” shouted Jesse above the blasting wind.  “Always made me rock cakes and let me play with her budgie.  Before it died, of course!”

After a few words from the minister, the ashes were duly lowered into the opened grave and an invite went out to gather at Guy’s pub for a wee libation and some of those dried up sausage rolls you get at funerals throughout North East Scotland.

There were, in all, about twenty folk assembled in the lounge bar, seated at various different tables according to how fast they had managed to get their after the graveside service.  Wet jackets off and pints down throat seemed the order of the day.  Cody’s dad had set up a tab but no-one knew how long that would last so the race was on to down a few drinks before economic reality kicked in.

His dad had worked on the rigs in the early days when men were men and oil was oil.  A big built man who took no prisoners, he had seemingly been impressed in his youth by the story of how Buffalo Bill Cody and his Wild West Show toured Scotland in 1904.

Tales of Sioux Indians and frontiersmen battling it out on Beach Boulevard and then proceeding by train up to Banff and Fraserburgh caught his attention and he vowed to name his future children after Wild West heroes.  Hence Cody Bill McLaughlin, Annie Oakley McLaughlin and in a rash moment Jesse James McLaughlin, came into being.

Cody’s mum’s protests that Jesse was nothing but a murdering bank robber who never even featured in the Wild West Show’s tours were as nothing.

A silence followed, broken only when Auntie Mary began to sniffle

Mr McLaughlin took after the Canadian Mounties and always got his way.  Needless to say, Jesse had a difficult time at school where he was nicknamed Sue.  Little did his mum know that Jesse was indeed a murdering bank robber who never featured anywhere except Crime Stoppers. But that’s another story.

Danny was seated three tables down from the bar still wearing the brown knitted balaclava which he had sported inside the cemetery.

Drinks on table, plate of sausage rolls on plate and customary mug of tea in hand, I sat down between Danny and Cody’s Auntie Mary.

“Sorry for your loss Mary.  Never really knew your mum but I know from what everyone in the street said she was well respected.  Sad loss indeed!”

“Cheers.  She was a bit dottered by the end but there but for the grace etc … How are you doing?”

“Great!  Workin’ here and there, doin’ this an that so canny complain really.  Even if I did, no-one would take any notice.  All good!  All good really; honest injuns!  Nice to see you. “

“She was a lovely woman.  Always there when you needed help.”

“They don’t make them like her nowadays, that’s all I can say!”

“Aye right!  Very sad.  I remember when she used to buy her sausages out of Dougal McPhersons.  On Sinclair Road you understand, long gone now of course.”

“How come she was buried in the Trinity?” came a muffled voice from table three.

“How come she was buried in the Trinity?”

The balaclava’d Danny had spoken.  A silence followed, broken only when Auntie Mary began to sniffle.  After a full thirty seconds she recovered composure and began to tell a tale.

“Well, when I was in primary, we lived in King Street just down from the old fire station.  Mum would often take us down the beach after school.  Used to take a short cut through the cemetery.  There’s a path down past Urquhart Road to Park Road if you know.

“I don’t really remember when, but one day we were halfway down and we heard a throbbing noise up above.  I was too young to take much heed, but your gran knew what it was.  ‘Run! Get down!’ she shouted as a big blue aeroplane appeared overhead.

“We stared as it passed over and I can still remember the gunner looking down at us as we lay flat on the ground.  You can still see the bullet holes in the gravestones.  My dad refused to let us go there after that.  Suppose that’s when he bought the lair.”

No one spoke for a bit.  Then the drink kicked in and folk began to tell jokes about the war, golfing heroes and that Union Terrace Gardens thing.

The inevitable Hitler had only one ball (Battle of the Somme in 1916?  No I just have one ball.)  Donald Trump’s hair do (Donald Trump said he still wants to look more closely at Obama’s birth certificate to make sure that it’s real.  Incidentally, President Obama said the same exact thing about Donald Trump’s hair.)  And Union Terrace Gardens (Tycoon Sir Ian Wood was set to inject £85million into a revamp of Aberdeen’s historic Union Terrace Gardens.)  Jokes abounded.

I asked the barman for more tea.