As the Home Office trembles under the criticism of the Advertising Standards Authority ‘s (ASA) latest adjudication, Duncan Harley reports on one aspect of the Home Office’s campaign against illegal immigrants. 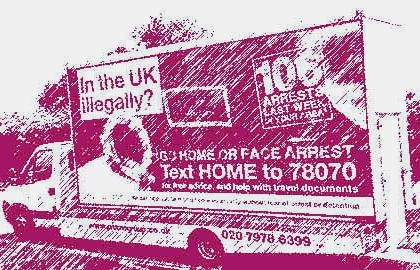 The ASA received a total of 224 complaints related to the Home Office billboards.

The ASA has yet again proved itself to be a toothless tiger in the relentless quest for fairness and honesty in public domain advertising in the UK.
Most of the media are reporting that Home Office vans, replete with slogans on the sides proclaiming ‘go home or face arrest’ and ‘106 arrests last week in your area’, which were driven around six London boroughs earlier this year, have been banned by the ASA.

The facts, however, say otherwise.

The boroughs of Barking and Dagenham, Redbridge, Barnet, Brent, Ealing and Hounslow were targeted by the Home Office campaign in July 2013 and advised readers, ‘We can help you to return home voluntarily without fear of arrest or detention’.

The posters were criticised by many, on the basis that the wording was likely to spread fear and unrest. Others such as Shadow Home Secretary Yvette Cooper warned that the campaign was reminiscent of the 1970s National Front approach to racial tolerance, whilst some others viewed it as a throwback to the dark days of Enoch Powell’s Rivers of Blood rhetoric of 1968.

Be that as it may, the campaign to persuade illegal immigrants to phone the Home Office to give themselves up drew extensive media attention from the outset and the resulting complaints to the ASA show that at the very least, some people in the UK see the advertising watchdog as a force for fairness in the face of misleading marketing campaigns.

Promogroup, the company who owned the vans on which the Home Office displayed the posters, also received a number of complaints about the campaign during its pilot week. Illustrative perhaps of how misleading the information on the posters might seem to some, Promogroup itself received several phone calls from illegal immigrants wishing to give themselves up.

The company has not to date revealed whether or not any of its drivers received surrender requests from concerned pedestrians during the week-long campaign.

The ASA received a total of 224 complaints related to this issue. These were from groups representing migrants in the UK, legal academics, members of the public and the Labour peer Lord Lipsey. Complainants challenged

In response to the complaints made to the ASA, the Home Office claimed the posters were part of a pilot scheme run between 22 and 28 July 2013 which sought to encourage those with no legal right to be in the UK to depart voluntarily and to increase awareness of the voluntary departure route. It added that the material was similar in tone and content to previous material it had produced on voluntary departures.

The mobile billboards in question were part of the pilot which covered targeted areas and were designed to improve awareness of local immigration enforcement activity, so that those with no legal right to be in UK were made aware that there was a real and present risk of being arrested.

The campaign had targeted six London boroughs which the Home Office claimed have either significantly above average, or very low, uptake of the voluntary departure route for illegal immigrants.

Additionally, the pilot scheme was, said the Home Office, designed to test the media used and to identify which areas produced the highest response rate, to target specific areas where illegal immigrants or people seeking work illegally were known to congregate, and high streets.

there is nothing to prevent the government using the vans again

As for the 106 arrests issue, the Home Office supplied the ASA with data claiming that there had indeed been that number of arrests made in the areas targeted and elsewhere during a typical week preceding the campaign, that is, the week of 30 June to 6 July 2013.

The Home Office response also made the point that the poster did not suggest that arrest was an automatic consequence of remaining in the UK without permission, since voluntary departure was a viable alternative.

The ASA’s judgement of the complainants’ objections took the form of an individual response to each of the five points of complaint outlined above.

On point 1, the complaints were not upheld and in conclusion, the adjudicators felt that the poster was unlikely to cause widespread offence or distress.

On point 2, the complaints were not upheld and in conclusion the adjudicators felt that the there was no content likely to condone or encourage racial violence or anti-social behaviour.

On point 3, the ASA upheld the complaints on the basis that the figure of arrests had not been substantiated and had not related to the specific areas targeted in the pilot campaign.

On point 4, the complaints were upheld.

On point 5, the complaints were not upheld on the basis that the adjudicators viewed the risk of arrest to those living in the UK illegally was indeed real and that the posters offered information about an alternative option of a voluntary return home.

In summary therefore, two out of five complaints were upheld and the judgment is that the advert must not appear again in its current form.

The message to Her Majesty’s Home Office is quite clearly to do better in future or face the mighty wrath of the ASA!

Providing the Home Office reviews its use of font sizes and does some rudimentary checking of published statistics, there is nothing to prevent the government using the vans again and it has refused so far to rule out doing so. A government spokesman said:

“We are pleased the ASA has concluded that our pilot was neither offensive nor irresponsible.

We have always been clear that this campaign was about encouraging illegal immigrants to leave the country voluntarily and was not targeted at particular racial or ethnic groups. In respect of the ASA’s other findings, we can confirm that the poster will not be used again in its current format.”

As for the ASA, the adjudication has been delivered but it will no doubt require to re-examine the issues should HM Government roll out a second campaign. On its website, the ASA claims to have sanctions available to persuade advertisers to comply with the Advertising Industry Code of Conduct.

The ASA advises that the vast majority of advertisers and broadcasters comply with ASA rulings and that for the small minority who don’t, there are consequences. The main aim is to bring about compliance with the Advertising Codes, it says, rather than punish advertisers. However, some of the sanctions at its disposal can, it seems, be very detrimental to those who choose not to comply.

The ASA claims that one of the most persuasive sanctions it has in its armoury is bad publicity, since an advertiser’s reputation can be badly damaged if it is seen to be flouting rules designed to protect consumers. Presumably the Home Office will be trembling at the thought of further damage to its already tarnished reputation.

The full ASA/Home Office adjudication can be read at: http://www.asa.org.uk/Rulings/Adjudications/2013/10/Home-Office/SHP_ADJ_237331.aspx?utm_source=Adestra&utm_medium=email&utm_term=&utm_content=Home%20Office&utm_campaign=2012%20Wednesday%20Rulings