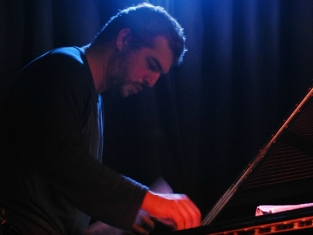 A South American musician who is due to play in Aberdeen next week has unwittingly set off an unprecedented clamour for concert tickets in a tiny hamlet in Somerset. Thanks to Brookfield-Knights.

Venezuelan pianist Leo Blanco, who was a major hit when he played Aberdeen Jazz Festival in 2007, had never heard of Broomfield before it appeared on a tour schedule sent to him by his British agent.

Then messages started arriving via his website, asking if there was any way he could personally arrange to supply tickets for his concert on July 6 as it had sold out, or if he had plans to play in the West Country again in the future.

“We hadn’t heard of Broomfield ourselves,” says Loudon Temple of Brookfield-Knights, organisers of Blanco’s current tour. “We were put in touch with a promoter called Music on the Quantocks who had never presented jazz before, but had had some success with concert pianists, chamber music and light opera and liked the idea of a Venezuelan pianist coming to the local village hall to play a solo concert. They sold out Leo’s date in about 48 hours.”

Music on the Quantocks uses no posters or leaflets in its promotions. Everything is done by electronic media and word of mouth and it seems that people hearing about Blanco’s Somerset gig and sharing links to YouTube clips led to his Broomfield visit becoming a must-see locally.

“Leo’s still building a reputation in the UK and isn’t signed to a major record company, and we certainly weren’t aware of any big pockets of fans in Somerset,” Temple continued, “But there are plenty of really good films of him available on YouTube and I think that’s helped in this situation. It shows that musicians can create a demand for their music just through the music itself.”

Constant requests for Blanco tickets eventually led to Music on the Quantocks adding an extra concert the following night, Sunday July 7. It also sold out within 48 hours and Blanco now faces the distinction of playing to five times the population of Broomfield over two nights.

Peter Lewis of Music on the Quantocks admitted:

“The demand for tickets took us by surprise – pleasantly – and we’re now looking forward to welcoming Leo down here for the weekend. Everyone’s talking about it.”

A spokesperson for Jazz at the Blue Lamp, where Blanco is appearing next Thursday (27 June), confirmed that there are still tickets available for the Aberdeen concert.