Hall Harper takes a few moments to contemplate the death of Iain Banks. 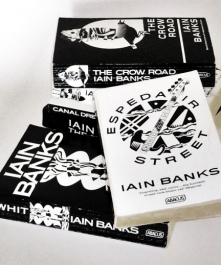 Like many others I was saddened this week by the news of Iain Banks’s death at the age of 59, only a couple of months after doctors had diagnosed him with gall bladder cancer and given him around a year to live.

I first became aware of his writing over 20 years ago when I found myself in Chelmsford with some free time between an early afternoon meeting and an evening dinner arrangement, and wandered into a local bookshop in search of something interesting.

Scanning the shelves, my eye was drawn to the name Espedair Street which, to someone born and brought up in Paisley, immediately brought to mind a road in the south of that town.

Standing in that booksellers in Essex, though, it seemed unlikely that this could relate to the same tenement-lined street of my home town, but a quick flick through the first few pages revealed that it was.

The result was that I bought the book and spent the next few hours totally immersed in a fascinating story that almost resulted in me missing my dinner date.

Over the intervening years I’ve read his varied output and was constantly amazed at the brilliance of a master storyteller whose diverse and quirky range of works were always intelligent, perceptive and witty. I must admit, however, that I haven’t explored the science fiction titles of Iain M. Banks, as I’ve just never been able to warm to science fiction as a genre, but that’s my problem.

But it was mainly the wit that I was always drawn to.

This week, I have heard many observers quote the wonderful first sentence of The Crow Road, “It was the day my grandmother exploded,” which, I would wholeheartedly agree, must surely be one of the wittiest and best opening lines in a modern novel.

Nevertheless, my first memorable encounter with Mr B’s wit was in the early pages of Espedair Street where he described one of the less-salubrious districts of my birthplace:

“Ferguslie Park lay in a triangle of land formed by three railway lines, so no matter what direction you approached it from, it was always on the wrong side of the tracks.”

Let me assure those who are not familiar with the area, aka ‘Feegie’ or ‘The Jungle’, that this is a description which says more than a 200-page dissertation ever could.

But wit was clearly an integral part of the man who recorded that his reaction to being diagnosed with the terminal condition which brought his life to such a tragically premature end on Sunday was, “along the lines of ‘oh bugger!’” and who later asked his long term partner, Adele Hartley, if she would do him the honour of becoming his widow.

Now that really is raising two fingers at death!

So while I mourn the passing of someone I believe to have been one of Scotland’s finest writers, I suspect he would have scorned any display of grief at his demise preferring instead that those left raised a smile and a glass to his memory.

So cheers Iain – thanks for everything!

3 Responses to “Away The Crow Road”