A frequent visitor to Tullos Hill advised Aberdeen Voice that things had got even worse. Suzanne Kelly paid a visit to investigate, and returns with photos – and evidence pointing to littering by… the tree planters. 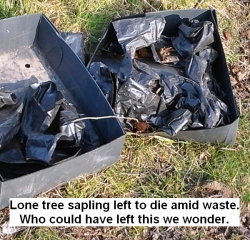 If you were one of the minority who were determined to wipe out the meadow and gorse habitat of Tullos Hill, ruining its insect, bee, butterfly and mammal populations in the process, no doubt you will be pleased at its condition.

It is almost completely denuded of plant and animal life, save for the protruding tree guards and tens of thousands of sapling trees.

On the other hand, if you loved the hill as it was, and expected to soon be in a vast field of dame’s violets and other wild flowers, and enjoy the older, established trees and wildlife, then this is a very black day.

The photos tell the story. 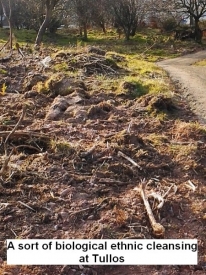 Gorse was eradicated  from all but a few spots.

Hardly any wildflowers or green plant life is left  in evidence.

The final contempt shown for the existing wildlife comes in the form of litter.  I discovered what were clearly boxes used to hold tree saplings scattered about a few locations. 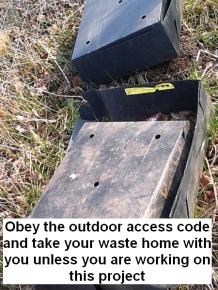 A tree sapling which had been left in one of the boxes was bound at the root inside of a square of black plastic. Loose squares of plastic were under, inside, and scattered near the boxes.

Plastic rubbish of this kind (as anyone with the slightest interest in the environment can tell you) poses a major hazard to wildlife on land and in the sea.

It seems the many awareness campaigns demonstrating how animals/fish/birds eat plastic and end up dying as a result were not part of the curriculum for our tree planters. 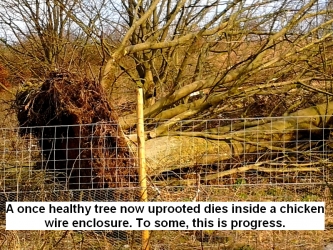 Inside, more existing trees are now dead and dying, damaged by those in charge.

This enclosure should of course come down, as it is denying access on public land previously enjoyed historically by visitors, and under the Outdoor Access Code, there is no right for the Council to have closed this off in the first place. 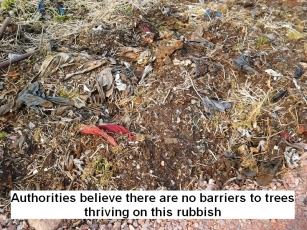 Nearby at St Fitticks, the tree guards which have stood for years continue to stand, throwing doubts on the scapegoating of deer for their failure to grow.

Despite these guards being choked by weeds with no sign of progress over the years, Aberdeen City Council’s Freedom of Information office insists these trees are growing – just slowly.

Who precisely says they are growing should come forward. 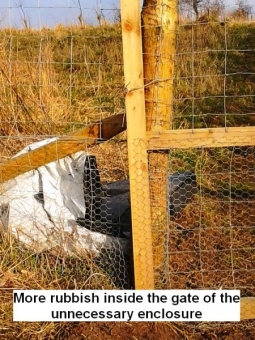 My photographic evidence is now several years old, and shows veritably no growth at all for the vast majority of the St Fittick’s plantation,

The shocking ruts in the landscape caused by earthmoving equipment and vehicles, the weeds growing around tree guards, the apparent lack of concern for any of the wildflowers or life that depended on the plants and gorse has – won an award for this scheme.

Ian Tallboys, ranger and proponent of what was largely Aileen Malone’s scheme, implemented by £70,000+ consultant Chris Piper, was proud to accept the award.

If anyone can claim to be proud of this scheme, there is something wrong with their environmental priorities.