“Please allow me to introduce myself
I’m a man of wealth and taste
I’ve been around for a long, long year”
–          Rolling Stones, Sympathy for The Devil 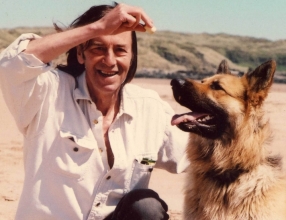 Please allow me to introduce myself. That would make a good opening line for a song.
In the pub we were discussing an absent punter whose specialist subject on Mastermind would be ‘Everything’.

On reflection I’m a bit like him – get me on to a subject and a flood of views, news and trivia can be unleashed.

Ask me to contribute an article about my website and I’m in my element, despite realising it’s partly an exercise in vanity publishing, and that I am that punter.

As a political activist, I campaigned in Aberdeen throughout the 1970s, a formative time of great international solidarity – anti-apartheid, Vietnam, Chile after the overthrow of President Allende. It was a decade of national, student and industrial struggles, an era of cultural upheaval. In Seventies Scotland, Gordon Brown became a radical student Rector of Edinburgh University.

On the industrial front, inspiration came from the building workers’ and miners’ strikes, from Jimmy Reid and the Upper Clyde Shipbuilders workers’ battles.

Bob Cooney would have a pint with us in the Adelphi Aberdeen Trades Council Social Club – his stories of the International Brigade and battles against fascists on the streets of Aberdeen brought working-class history to life. The decade culminated in the 1979 Devolution referendum, when I worked tirelessly for ‘Yes for Scotland’.

After school I got a job as a technical author with a helicopter manufacturer, and also contributed to the local newspaper as a ‘stringer’. Since then, I have written for the New Musical Express (NME), Morning Star and other radical journals.

I worked for an Aberdeen specialist black-and-white photo printing company before spending the Eighties cocooned offshore with diving firms. I spent four years in Mumbai in the Bombay High oilfields. I then managed small photographic businesses/labs in Aberdeen.

In 2003 Yvonne and I moved from East Cults (Garthdee) to Collieston, which I flew over when I worked in the North Sea. Now semi-retired and as busy as ever, I own and run a website www.forviemedia.co.uk  .

There, a career condensed into a few short paragraphs. ‘Perhaps my best years are gone. But I wouldn’t want them back. Not with the fire in me now.’ – Samuel Beckett 1906-1989. ‘Krapp’s Last Tape’ (extract).

Online since 2004, forviemedia began as a stock photo library with 120 images

Online since 2004, forviemedia began as a stock photo library with 120 images – four decades of strong views, my back pages in focus. I launched the current format in May 2012, when analytic tools indicated that ‘News’ was by far the most popular and searchable section of the site. So now it’s part-news, part-images, almost a blog.

I combine articles and images – clicks of a mouse and shutter buttons. Our News section and site content are refreshed daily, constantly changing. The Menie estate rolling story is by far the most popular item, closely followed by lard. Don’t ask!

My small Employment Support grant ends in May. I’m both saddened and heartened by the news that fifty percent of Scots farmers would not survive were it not for Working Tax Credit. Despite its worth, plus my restraint and compromise, forviemedia is too political for most business funding organisations, so I’m investigating community and educational grants at present.

Conversely, ‘The Canadian’ online magazine implied I was benefitting commercially by writing for them. Politicus wrote recently to say my website didn’t seem to have much politics in it, so I can’t win. I guess it depends on your stance; mine is possibly too close to Bob Cooney’s in the Castlegate.

It’s certainly difficult selling images online nowadays, although it’s never been technically easier. The North Sea Oil shots over twenty years have always brought in a trickle of income, with no marketing. The internet is a fantastic research tool, and better search engine optimisation helps folk find you, but it’s all about working one-to-one and finding a few discerning customers.

I worry about language use being compromised due to deliberate keyword use – catchy titles for images for example. Connectivity and broadband speed are particular issues in rural areas.

In the future I’d like to become a major ‘portal of call’ for news and debate in the Buchan area, and provide a (free) service for Aberdeenshire artists and photographers. When I told Yvonne that I intended to utilise my bus pass to take the dog and do pub reviews, it raised a smile and then an eyebrow. I am that punter.