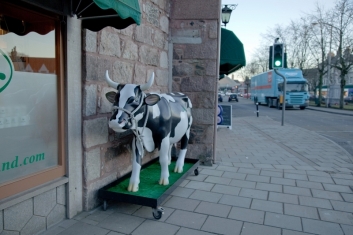 Went out for a Sunday newspaper at the weekend and bought the one with the front page article about the Scottish Cardinal who has been accused of inappropriate behaviour towards priests stretching back 30 years or so.
Big mitre, nice smile, firm lips and seemingly about to vote in the next Vatican elections despite the accusations.

I asked the check out man the usual ‘how is your day’ stuff since I like to enhance the checkout experience and am committed to lightening up the day for those in crap occupations.

Without any hesitation he commented on my choice of newspaper.

“Isn’t that Cardinal O’Brien,” he said, “the man that Stonewall voted Bigot of the Year in 2012?”

When the Cardinal O’Brien allegations were first public made, the Roman Catholic Church was saying that it was up to him to decide whether or not to attend the Sistine Chapel hustings.  I could see the logic of the argument of course, but just for a wee moment my jaw dropped in complete amazement.

The accused was being left to make up his mind if he could continue in the role of representing the faithful of the UK despite allegations which would have landed that Saville man in police custody.

Today of course everything has changed.

The man has been sacked according to reports, such as that in the Independent on Monday:

“Make no mistake about it, Cardinal Keith O’Brien has not resigned as Scotland’s leading Roman Catholic, he has been sacked by the Pope and that is a measure of just how grave the crisis in the world’s biggest church has become,” says Paul Vallely.

The church continues to talk about ‘great sadness’ as opposed to ‘great shock’ and there are conspiracy theory rumours sweeping the net regarding the timing of the allegations.  But when the chips are down there is no getting away from the reality that he was, indeed, sacked by the Pope.

Now, I hear you ask, what has that to do with a large plastic cow on wheels?

Well, not much really, except that from the perspective of the cow it’s all good news since it diverts attention from the continuing issues in the food industry.

What a week it’s been though.

Ikea have found horse DNA in their meatballs although, to be honest, I would have been more surprised if they had found wood in their bookcases. 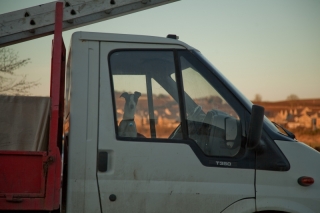 The Papal hustings will now go ahead without a UK vote due, it seems, to a mix up about how church officials should act in private.
The government appear to have a sex scandal on their hands, although it’s seemingly not a government problem just a Liberal Democrat issue.

To top it all DVLA are now issuing driving licences to dogs, providing they speak English and can reverse into a parking bay without barking.

One Response to “Grumpy Jack’s Corner No.7: Dog Day Week”