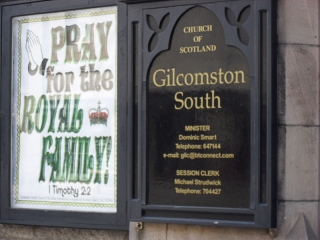 There you go. Giving them £41.5 million a year isn’t enough. You have to pray for them as well.

With the ConDem government introducing what is widely accepted to be the new Screw The Underprivileged measures almost hourly you might think there are others in our society more in need of prayers but Gilcomston Church would appear to see things differently.

Can I suggest an alternative idea where the Gilcomston congregation prays for the Royal Family and we give the £41.5 million to the poor and we’ll see who ends up better off.

Gilcomston Church recently hosted ex Conservative MP Jonathan Aitken who served an 18 month service for perjury in 1999 and ‘found God’ when he was in prison although we do not know at this moment in time what the deity was doing in there.