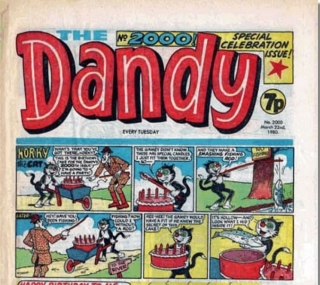 The bell tolls for one of Scotland’s most famous businesses, which had exported its products around the world. Its long-serving staff members, some of whom had been with the firm for over five decades, are distraught as the firm lets them go for younger, more modern business models.

Yes, the Dandy has folded in a very literal sense; it is no more.

DC Thomson could have closed one of its other comedy publications such as the Evening Express or the Press and Journal. The circulation of these comics was outstripped by the Dandy.

“We’re considered axing the Evening Express. It doesn’t make as much money as the Dandy, but it sure is funnier. Besides, our new core family values don’t permit us to continue inspiring bad behaviour in young people. The company will therefore continue producing the Evening Express and Press and Journal, which inspire no one, young or old, to do anything.

“One thing is for certain, young people today are always on the Web. We think the reason we have done badly of late has to do with the Web, whatever that is. In fact, we’ve been making a case for building a web in Aberdeen, as the web’s what everyone seems to be into around the world.

“I can’t imagine why people are against the web and all the connectivity it would bring – whatever that means.  We’ve been gently hinting in our comics in subtle ways that the city should have a web.  Perhaps we need to give the web idea a bit more coverage in our local papers.”

Many of those let go have suffered problems. One young woman, Beryl the Peril, has noted a deterioration in her relationship with her father. Social services have intervened, and she is receiving therapy to find more productive means of channelling her frustrations rather than pelting her father with snowballs. She has been cautioned that her neighbourhood antics could earn her an ASBO, and she may be charged with elder abuse.

“It’s all because we didn’t cover the dual carriageway that my life’s a mess,” Beryl told a press conference; “Without a granite web, what’s a girl to do but get in trouble down the Union Square Mall.”

A canine was seized under the dangerous dog act, as no one is certain what breed it is.  Gnasher, as it is known, was owned by a former Dandy employee named Dennis. It is thought the dog picked up some aggressive behaviour from its relationship with Dennis, who will be charged with menacing behaviour.

Dennis and Beryl have both been put on mandatory Ritalin regimes and will soon calm down, becoming acceptably well-behaved members of society.

Aberdeen City Council has come forward with at least one job offer for a redundant staff member.

“We have been looking at the accomplishments of one Dandy regular, and hope to poach him for our administration. Roger the Dodger, as he is known, is just the sort of person we need running things around here in an executive capacity. A go-getter like Roger would be the perfect addition to our team, even if he is a bit of an over-achiever and a little over-qualified.”

Sadly, staff member Desperate Dan may not be well enough to find any future work. After decades of eating Cow Pies, he has contracted BSE. Normally a very serious condition, ATOS have assessed Dan and decided he is still completely fit and well for all types of work. The Health & Safety Executive have rightly banned him from shaving with a blowtorch, and he is no longer permitted to lift a cow with one hand, either. According to friends, Dan is feeling desperate.

Health problems are also plaguing ex-DC Thomson employee Bananaman. His binge eating, and use of genetically modified bananas purportedly to gain strength have greatly injured his health. Some say he was actually using performance-enhancing drugs but pretending his strength came from fruit. Others think his delusions of powers including flight stem from a bad drugs experience in the Torry area of Aberdeen.

A team from ATOS will assess his fitness to work (which will say he’s fine) and determine whether or not he needs drug rehabilitation. Social workers will help his rehabilitation by helping him choose appropriate dress for the workplace.

We wish all the comical characters of DC Thomson all the best in their futures.